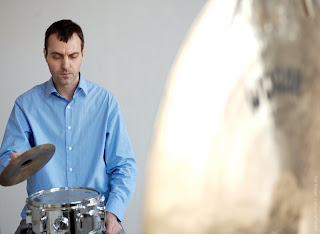 Jon Mueller's his own staggering institution of hallowed avant-post-rock and ambio-orchestral-jazz. A drummer, at heart, who organically expands outwards into thick and heavenly odysseys with his quintet Collections of Colonies of Bees, but also a true defiant esoteric as a solo artist and constant collaborator, truly galvanizing the Om of sound - be it engaging, rousing, haunting, beautiful or alienating.

Mueller is well known for his tenure with Pele, a Milwaukee based post-rock band whirling around the same Great Lakes scene as Tortoise, The Sea & Cake and The Chicago Pop Underground.

This month alone he's had 3 separate releases: through the Table of the Elements label, Collections of Colonies of Bees has released Six Guitars, an enchanting and swirling ballet of chiming strings and humming reverb that builds and churns and recedes again, meditative and musing. On his own label, Crouton Music he released the solo effort, the chilling and spastic Strung. Then, again, on Table of the Elements, he paired with fellow multi-instrumentalist, Switzerland-based Jason Khan, they've released the insular Topography, a patient and moving take on wispy noise and minimalist/avant-garde percussion style, as told through 5 chapters named for cities, including "Milwaukee."

From the tubular wind chime guitars of Colonies that slalom gracefully over brash pounding percussions, to the storm of shiny fuzz colisions that writhe and expand in grand stratospheric soundscapes with Topography, to the disorienting, jittery experimetnal pieces of his solo work, Mueller creates music so thick and daunting that it ameliorates the physical artist, disentegrating himself into the music. 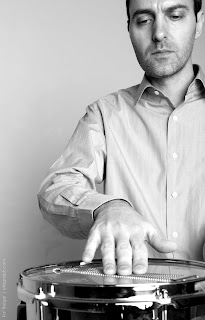 DC: ...how conscious are you of the emotionality of your music...is this a cathartic release--something personal, or are you trying to percolate something psychologically or emotionally?
JM: It really involves all of that. It is personal, but I'm trying to make a connection with others. I never intend to alienate. It requires listening beyond the surface of what you might initially perceive.

DC: how do you approach songwriting? is it different for each song?
JM: It is different for each piece based on the idea, but essentially I use percussion. That can reveal many different kinds of sounds, and I'm constantly exploring those possibilities, so those discoveries change the approach too. However, the feeling of when something is completed is often familiar; when the piece has said what it can say.


DC: I was listening to 'strung' and as the blurts and roars started churning, my roomate from down the hall jogged in and wanted to know 'what that sound' was...like my computer was dying and rhythmically moaning electric death rattles...for some people - this music, the heavy experimental, thick trip-outs are hard to digest...what draws you to this as opposed to poppy hooks and vocals and choruses....are you able to track what may have lead you from past projects of post/rock and avant/jazz to Pianobread? a song like Milwaukee--
JM: Something curious is what attracts me. The sound has to make me think about something interesting from listening to it. A lot of music doesn't do this for me, but I'm certainly not against conventional music. All sound can serve a function and it just depends what I find interesting. I think that's the case with everyone.

DC: For Topography, with your connection to the city - did the song 'Milwaukee' hold any special meaning?
JM: Each of the tracks from the 'Topography' were titled after the cities they were recorded in. That's the reason for 'Milwaukee.' There's no special meaning beyond that, really.

DC: ...often you go from an extreme drum style to a soft ambience....(homeostatic vs. six guiars), is there a middle ground your intereted in? or a reason you bounce betwee poles?
JM: It's mostly how I described before - it's really about what idea I have, and then finding ways to fill that idea out, and let the sounds have their own voice in the music. Sometimes that ends up being subtle, and other times more direct. It really depends on the situation, and is a testimony to the range of sound that percussion can produce.

DC: are their contemporary influences you can point to?
JM: There are many. Too many to list, in fact. I love a lot of drummers, but feel that mentioning them wouldn't necessarily seem relevant to my work. I'm influenced more by people working in sound that don't look so much at the instrument, but all the possibilities with sound itself, and how that interacts with people. That's connection is more important to me now that the idea of developing a specific musical technique.

DC: what are you working on now, or currently experimenting with...or what are you looking forward to?
JM: Right now I'm preparing a new set that I'll be touring the midwest with in August. My focus is really on that right now, and I won't be recording any more for awhile.
Posted by jeff milo at 4:58 PM