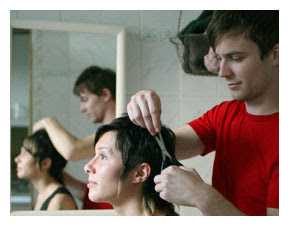 nothing terribly "un-cut(z)" about this

Matt and Kim are sick of disclaimers. Their self-titled '06 debut is a perfectly popping, bluntly straightforward, arms raised, spontaneous shout in the middle of a crowded mall, a release, a fit of harmless spasmodic giggles, a hard-driving dancefest well-aware that 60 percent of its dance-ready audience will simply wiggle gracelessly. But, as singer/keyboardist Matt Johnson says, “I think you couldn’t totally get it unless you had seen us play live — that’s been the consensus that I’ve heard a lot.” Indeed, you can hear or imagine the potential for frenzy — but it was something wholly different to actually feel the sublime, enwrapping electricity caused by their live shows.

Their reputation ripened from their upfront uproar live shows in warehouse basements and kitchens crowded with swarming fans spilling upon each other (and often their instruments). “We got around not because of advertising,” Matt says. “It was just because people would get excited and want to introduce their friends to us, which was an organic way for it to spread.” He admits he scanned iTunes the other day to read comments of their debut — all variations of "this doesn’t do them justice, go see them live" outlooks. “I didn’t want to have a disclaimer anymore,” Matt surmises, agreeing that’s what happened with their latest, which they just finished last week.

As for the title? “I dunno,” he shrugs, “you got any ideas what to call it?” Rest assured, whatever the title (quite possibly Matt and Kim: Can Do), it should be out by September. “Our last recording we spent nine days on, this one we spent like three months on. It’s just the best thing I’ve ever created in my life. It’s finally like what I wish we could have done since square one.” Adding though, that he “still stands behind [Matt and Kim's] songs.”

Matt notes the roots of this infectious craziness (or “what is expected of a Matt and Kim show”) was born from “playing our friends' parties (through ‘04-‘05), at some point we were playing three times in a week and they would be places where people would go to have fun and be that crazy in the first place. I think we’re a pretty good soundtrack to that — just being an upbeat, basic-rhythm-and-melody sorta situation, and we still try whenever we can to do warehouses 'cause we want it to feel like a party, not like: there’s the band on the stage and here’s the crowd, here’s the separation and here’s the bouncers giving you dirty looks.” He adds, “bouncers are my nemesises … nemeses?” Their charismatic personas act as a third instrument.

“Kim and I,” says Matt, “we’re just genuinely excited to play. Even if it was a rough day, when we finally start playing it gets me psyched up. I think people really respond to the honesty — that’s a new kind of connection.”