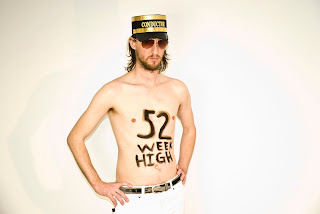 "T-minus 10…9…8…” and so on, as a crackled mission control voice counts down to the ignition of 52-Week-High’s “Tapas,” the flipside opener of a 7” that elsewhere includes declarations that “time is of the essence,” time to get moving, time to get shit done, in the rushed and ravenously industrious calendar year that the band name would suggest. 52-Week High represents the recorded fruition of songs stockpiled through the last couple years by the wiry bander and bassist Keith Thompson (of Johnny Headband, Electric Six, Desktop) flourished with the production and instrumental contribution of fellow Detroit-based musician and, like Thompson, appreciator of synth-inflected, swaggering, metal-leaning rock, Jonathan Weier (of The Dead Bodies), and aided by the shredding abilities of guitarist Jon Babich (alias Alexander Soundczech), metal maven balladeer Steven Tuthill (alias Perry Pegasai), and also with drummers Mike Alonso (Electric Six) and Adam Cox (Dead Bodies).

At the center of it is Thompson finally embracing a front-man role, flexing his bassmanship and belting out his anthems in a range from howl n yowl (on the pummeling opener “Stimulus”) to lower, shimmying sing-speak (“Market Dictates”). We’re essentially tumbled into an already speeding van, ricocheted around the bench-less back at 60 mph from the very press of ‘play’ on “Stimulus,” with a very aggressively riffed guitar punch that builds into a hook with the drums feeling like the a two-pound monstrous knock upon a metal door – it’s a quick, tough, invigorating rocker that sizes you up, instigates you and, for lack of a better term—yet, perhaps fitting in the spirit of classic heavy metal—provides a face-melting solo that swerves and roars all over the room, knocking shit over until it finally breaks through the window—complete untamable rock shit.

The title track (which, the actual title-itself, one dissects like an initially confusing vanity license plate…but for the sake of following the time/essence theme, could be slurred together “isn’t over!”?) is the most layered and cerebral of the entries – following a krautrock kicked motorik percussive drive under spacey-guitars and an ever churning synth-gurgled engine – as we get up to speed and start cruising down this autobahn, strange and cherubic fuzzed voices “nah-nah-nah” us along with this dreamy tone that waves its way across the sky, which, along with these tribal drums that chop and plod their way in, would make this something like a roadtrip with Neu, Dan Deacon and LCD Soundsystem (listen for those dreamy piano prances towards the end to ease us out of side one…) 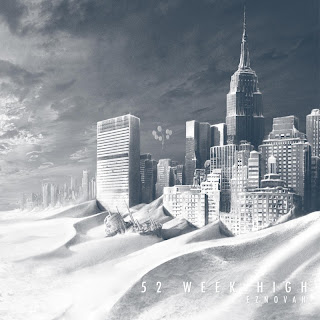 “Tapas,” named for a Spanish appetizer Thompson likely could have lived off whilst touring that country with E6, brings those gritty cathartic guitar surges back (along with another wild snaky guitar solo) and bolstered by heavy-metal lion roar of Tuthill – less the hooky fist-pumper of “Stimulus,” “Tapas” is more of a go-for-the-jugular and maybe-break-some-chairs-in-your-basement/sick-of-this-shit rock-out, all guitars and howls. It details a period of frustration and inertia for Thompson, spending “six years of my life / living in a shack” while he worked in video production and thus had his time eaten away, “getting nothing done,” still-able to perform in bands, but unable to find time for songwriting – thus the catharsis of 52-Week-High and all this stress upon finally getting things done. “Stimulus,” similarly, details selling your house and renting a van, abandon your ties and hit the road.

Then we come to “Market Dictates,” a minor-masterpiece of dance-rock that stresses about the universe closing in to dash the hopes of selling a condo in this bleak economy. This shimmery guitar plucks and pulls you in and we lock into a characteristic JHB/E6-feeling hook, muscular-yet-glitzy, riding this infectious beat tailored to a discoey side-to-side hustle. All the while synths are whirling and careening around, like sirens, or UFO photons or animalistic growls

52-Week-High is above all, liberating – as one can’t ignore Thompson’s therapeutic casting-off of various time-wasters, be they day-jobs or condo-created-stress and finally birthing a fine batch of his own songs – then girded and propped by fellow Detroit rockers who share Thompson’s love for progressive metal, aggressive guitars, and all things synth-surged that could ride an arc from industrial, to alternative, to heavy metal, to pop.