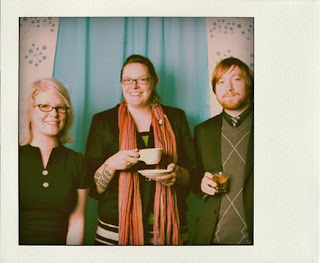 This Ann Arbor based trio presents an epiphany of miniamlist indie-pop - called When The Sheet Hits The Fan - ...which has already been out for more than half of a year (which makes me your classic Johnny Come Lately blogger...) but I'm not here to wear the hat of bandwagon jumper and say santimonious things to create false hip-ness, or cred, or whatever...

It's pure, pleasing pop - with a farfisa and a drumkit and heavenly vocals (...and some guitars) - in the spirits of, altogether, early girl-group pop acts, latter 90's dark and delicate dream pop and a bit of spacey atmospheric sound sculpting mixed in - it's quirky, it's charming, sometimes dark and weird, but mostly - (especially in this mostly blah of a winter) downright springlike.

So listen to this:

And then head over to either their myspace or their site to find out about downloading this album.
Posted by jeff milo at 7:04 PM