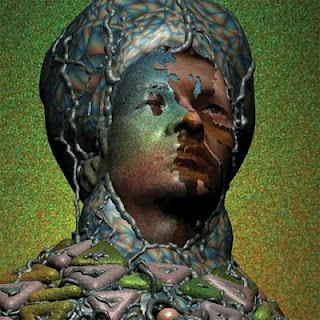 Or visit the Web site for the song/video -

Compared to Yeasayer’s still-phenomenal debut, this album feels like warm sunrays upon your short-sleeve tenders arms, a tumbling into the welcoming tickle of the verdant grass, an all night twist into the gurgle and hoot of the moonlit forest until sunrise – as opposed to their very stirring yet so very austere original sound. There are inevitable dance jams on here, conjuring things as glitzy and flirtatious as a Timberlakean midnight groove. While elsewhere, there’s the more cerebral, but still freewheeling road-trip romp of self-assurance and self-discovery.

The arty-folky-space-rock NY group have gone from their first record’s strange and invigorating hybrid of abstruse NY-art-punk/jazz sensibilities melded upon Indian/West-African folk-flavored tribal haunts from their past and stretched their arms into the coat of east coast flavored experimental indie-rock, spacey-psychedelic, but more attuned to our Radiohead/Animal Collective-tested ears. Now, before thou who lovest their past forays into dark and apocalyptic churnings of ghostly roaring harmonies and mantra-esque choral chants and twingey bewitch-ments, you will find the occasional zing of familiar flavors – like the swirling fog of those synths wafting into throaty ooo-wee-ooo-ooo-oooh harmonies from the ensembles that flex and warm up the space for the now reverb-less, echo-less vocals of “Madder Red,” (dig deeper and you find gristly burning guitars sounding almost angry to get out and groan, being calmed by the shoulder pat of subtle synth swirl dressings). “Ambling Amp” is probably the most potent punch of pop – with polyrhtyhms of steady chops running atop a hypnotic and dancey bass groove. But all their undulating accoutrements of synth and tablas and sitars and whatever other fun toys are, like before, outshined by the beauty of their voices – in harmony, yes, but often allowing solo singers to finally rise to the forefront for some poignant pop balladry. 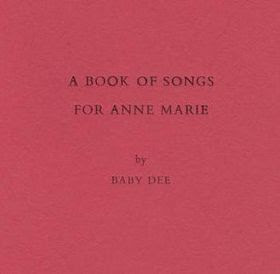 "A Book of Songs for Anne Marie"

Baby Dee's Drag City release throws a wide arc of emotions for any listener willing to sit beside the harp-plucking, piano tickling songstress – you’ll be charmed, even delighted, taken aback by a dynamism both swishy and breathtaking, saddened by an austere air, tear-jerked, perhaps, by the melancholic beauty of those wintery piano strikes. Ballads like the subdued sway of “Unheard of Hope” into “Black But Comely” is the ideal winter blues soundtrack – because they both embody the potential beauty found in an otherwise dreary, lulling, overcast snow blown mid-season afternoon. Not that this is entirely the sweet and reviving hot cocoa escape type record, but more like the meditative churn of a tome-sized novel of short stories, some fantastic, some so universal it reminds you of your own past heartache.

Her singing style will be offsetting at first, because of its flamboyance, (it can, at times, be as playful, wavering and distinctively throaty as some exaggerated singing woodland creature from an animated movie, but her inflections waver, keeping you on edge, smooth and cooing, to low and biting, angelic to coarse, and jumping between a serenade to a sing-speak. Definitely an album for the soul of winter – which, half-past the fifth minute of “Anne Marie Does Love to Sing,” may push some to bring out something sunnier.

But there’s beauty in this, "not a tree of sticks but a forest…with boundless reaches…”
Posted by jeff milo at 5:57 PM