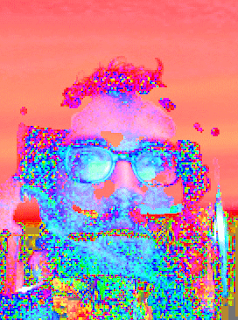 The human face is bound and furled in brown curled poofed hair and wiry beard strands, while the human body is encircled by keyboard, microphone, numerous pedals for delay, loops and echoes, a sampler and maybe a guitar, with his form hoisted upon a drum stool, with amps behind him. This is the bridge from whence BJ Warshaw launches Shooting Spires – his face as obscured by hair and thick-rimmed glasses as his melodies are brushed, layered and masked by static and airy drones and caustic clattering beats, ranging from claustrophobic gurgles, to stretched out invigorating drives, to vertigo-inducing pans and pivots.

Noise-pop enthusiasts will know BJ from his long tenure in Brooklyn’s Parts & Labor, which he started with Dan Friel back in 02. Fans of said-band’s chrome-cut clang and churn style will fit comfortably into BJ’s other project, Shooting Spires (which visits Detroit via the MOCAD – on Feb 5th, on a bill with Deastro).

Shooting Spires may be the perfect middle ground between the dreamy fuzz cascades of early ambient composers (the cherubic elements of Silver Apples) and the more confrontational weird wail and acerbic yowled arias of eventual punk-ified takes on ambient/noise (the brow-raising, ear-bending elements of Boredoms) lassoed and swung about across the star-dotted skies by something like a folk-lsh sensibility in that singer/songwriter vein, with an undeniably NY-tinged/Warm Jets-era Eno vocal style, with a voice showing grace in its high-range articulation at some points (see “A Million Drops”), and then losing itself in the squall of the driving beats and surged synths – (see “Right”). His voice, like everything else in the mix, is not left untouched by some kind of pedal or reverb. 
DC - Chart a story for us – where and when and how, does this project start?

BJ – Initially, it started as a drone/ambient project as a way to explore and experiment my increasing interest in playing with electronics. I had started occasionally performing solo with various instruments and pedals, I think, as early as 03 or 04. In the winter of 06 I went through a rough period; ended a relationship, hated my job, felt generally stifled and in a rut. I basically locked myself in my bedroom, (at the time, a tiny, windowless cave in a larger warehouse/loft-space in Brooklyn), and worked on music every day after work, which was what became the first, self-titled Shooting Spires record.

DC – So, just a cathartic release at first, not necessarily any direction yet…

BJ – I didn’t have any preconceived notions about what this music would be, had no intention of releasing it, didn’t set out to write ten songs. I think it started to sound like a record about half-way through that writing process. Most songs started out as a simple loop, either a looped drum beat, or some oscillator blips or a beat made with the Casio-SK-1 sampler. Like, I’d just make some awful noise with my mouth into a sampler and use that static sound to construct a beat and then write some chord changes over that and then a melody, and then I’d overdub various other noises and instruments.

DC - …meaning behind the name?

BJ – I think I started calling the project Shooting Spires around this time I was deciding the songs were worth releasing, in some way. Originally I wanted to simply call the project Spires, but that was already taken. I went through a long list of modifiers and ended up sticking with ‘Shooting Spires’; I like the ambiguously threatening nature of the words, and think of it both as a reference both to natural phenomenon and religious iconography.

DC – and, inevitably, I have to ask, how would you distinguish this from Parts & Labor?

BJ – Formally, Shooting Spires is just me writing, recording, creating. So in that aspect it’s a bit more unfiltered and in some ways less refined than Parts & Labor. More ideologically I think of Spires as more of a traditional singer/songwriter project, albeit with a very different instrumentation than your typical acoustic guitar slinging troubadour. P&L is a band, with all the advantages and hurdles of having multiple musicians contributing to the writing process. But, both definitely inform each other. The new Shooting Spires compositions I’ve been working on sound less like P&L than, say, those songs on my first record. Over the summer I reworked my set-up: I’m now using a laptop and an electric autoharp.

DC – Could you share your thoughts on noise experimentation? How your regard, or philosophy, has changed, in terms of that style/practice/genre?

BJ – My favorite music is music that sounds both familiar and strange at the same time. I strive for this balance in all the music that I make; experimenting with different instruments and sound devices is a key aspect of bridging this divide. Take, “A Million Drops,” – I made that beat using the aforementioned Casio SK-1, clicking my tongue in the microphone and putting it through some delay and other processing. But to me it does sound really organic or insect-like, rather than sounding like the typically sterile beats you find in most electronic music.

DC – What have you been working on lately?

BJ – I’ve been making a lot of field recordings with my iPhone and using these found sounds as source material for constructing beats. I’m also way into using the electric autoharp in the new setup. Traditionally it’s a folk instrument and sounds, to me, very Appalachian, but, I’ve been running it through various guitar effects, pedals and making loops using the laptop. I like thinking of it as having one foot in the past and one in the future.

BJ – I’m working on the cover artwork for a four part series of split LPs being released by Atlin Village (Germany-based label that released debut Shooting Spires S/T). Shooting Spires is one of the musical acts involved, along with Oneida, Xiu Xiu, Women, DD.MM.YYYY., Pterodactyl, Chad VanGaalen and Pit Er Pat. It’s gonna be a beast.

P&L is also hard at work on a new record, deep in the writing and demo-making process. We’re hoping to record it in March. I’m hoping to get the second (Shooting Spires) album done this year too.