When Ancient Language started performing, some asked “…who?”

Then, once they understood that this was the next project from electronic music composer Christopher Jarvis, previously one-half of Detroit’s once-highly-buzzed Phantasmagoria… Then they got it. Then they started listening…

But then they had to be down with the fact that this was instrumental music. It blended elements of trip-hop, ambient-pop and re-stoked the cerebral crackles of IDM, veering from the earthier acoustic textures of Phantasmagoria and past the ultraviolet veils of a dreamier, cinematic realm.

Then Ancient Language became known as just Christopher Jarvis for a bit… In fact, the local composer even released a full length record under his true name.

Then, if you were keeping up, he changed it back to Ancient Language. 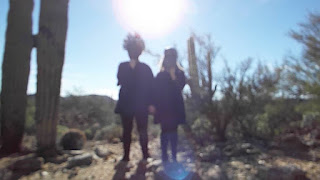 “Because I wanted (Ancient Language) to become more than just the music, to, hopefully, become more of a multimedia thing. And…I don’t wanna sell a t-shirt with my name on it. That’s weird.”

Jarvis pauses when asked about influences. “I don’t wanna talk about that and come off sounding pretentious or heady. I’m really just trying to tap into my emotions. It almost comes from somewhere else, like a form of meditation… I’m fully present when I’m writing and playing it but I’m not intentionally making a song that will sound a certain way.”

Jarvis works with Abelton when he’s recording. When you see Ancient Language perform you’ll see a laptop on stage. But Jarvis isn’t just programming a beat or a trusty loop; this isn’t push-button turntablism.

“I’ll put out a track and someone says: ‘Oh, that sample you used is so dope!’ …But, it’s like: ‘No, I actually played that!’ I don’t use samples. I play everything live on the keyboard or the guitar. I don’t always play drums live, but some, like in “The Sky Opens Up” are live. But I play everything else live in real time.” 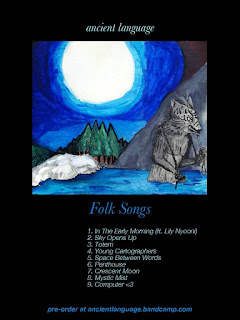 Jarvis has been working on Folk Songs for the last two years. It’s going to be a relief to get it out but, more than that, he’s hoping this is really the moment people start listening closer to his music, even if it doesn’t have lyrics. Because the guy doesn’t wanna sound cocky, but he feels like he’s reached another level, that it’s evolved since Clairsentient (the previous record released under his own name).

“I wanted to simplify what I was doing,” said Jarvis. “Just, to get to the very basics: just good melodies, not overding it with all this production stuff. Lots of the chord progressions I’m using here are very traditional, almost folky type progressions, but I’m using it in a different context, obviously, with electronic music.”

Jarvis says it feels good to be done and to have reached a new level but that Ancient Language still doesn’t feel fully realized. It might feel fully realized in his brain but, as he puts it, it’s hard to get people really engaged with instrumental music.

“I’m cool if people listen to it as…like…studying music or whatever, I’m glad my music helps you relax and do your thing but when I write it it’s way more engaging and energizing to me. So I want it also to be engaging to you…Listeners too often latch onto vocals…”

He worries he might not be able to incite the same kind of hype or party-starting bombast as his contemporaries like Passalacqua or James Linck. “Because…” he pauses. “Sometimes an audience needs a personality behind the msuci and I’m not really about putting a personality behind a song.”
Ancient Language is self-effacing by design. There’s no photos on their Facebook. His brother Zach, an electro-composer in his own right, joined him to fill out the live performances with electric bass, but you won’t see his or Chris’ name noticeably emblazoned anywhere. “We’re just trying to make this all about the music…”

The music without lyrics…

“Still, I do feel like I wear my heart on my sleeve when I write this music. But, the question is whether that comes across to other people. ‘Cuz without lyrics, that’s harder to do with people.”

Depends on what language you’re speaking…

Because, put simply, it’s music that is the “ancient language,” something universal passed down from our days fresh out of the primordial soup making noises in caves. It’s an ancient or universal form of communication. So, listen closer, and you’ll hear what Jarvis is talking about.

“The songs have verses and choruses, even if they don’t have lyrics…They still have bridges and build-ups.”

Whereas Clairsentient had several collaborators by-way-of vocalists and rappers singing over those compositions, Jarvis took Folk Songs in a purposefully different direction, producing it all on his own and letting the instrumental tracks stand on their own. “In The Early Morning,” which features singer Lily Nyooni, is the only instance of vocals.

After this weekend’s show, Jarvis is going to take a break. He’s earned it. He’s been going to school full time (video production at Specs Howard) and working, along with constant shows with Ancient Language. But eventually they’ll get started on Folk Songs’ follow up. “I think I want to get a full band to play it, with strings and a full brass section….and vocals on almost every song.”

You can see Ancient Language performing live at Alstock 2015
Posted by jeff milo at 11:17 AM