Prude Boys - "In The Alley"

We're "In The Alley" for The Prude Boys new single, which premiers tomorrow at 9 a.m. here: http://prudeboys.bandcamp.com

It's a great track... And you'll be hearing it in a matter of hours...
Giddy up drums and a cresting wave of guitar fuzz shoots down into this croony-garage-hop boogie of a number, where images of grease-stained white T-sleeves rolled up to hold cigarette cartons muscle into a muck-spackled bass slapping like sliced cardboard against the backdoor of the club where these "boys" are throwing their own party...or at least just loitering. It's probably my favorite Prude Boys track to date, bright and frolicsome here and there yet discordant and gunky in all the best spots, and a steady smoldering of tape-buzz under the dual boy-girl chorus. 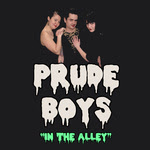 "In The Alley" will eventually join up with three other new songs that the Prude Boys finished up recently, part of a forthcoming EP recorded with Ben Collins on an analog 8-track reel-to-reel out in Ypsilanti. As has been their MO since they started recording, the trio finished these songs in less than two takes, each; the idea being to capture the essence (and the shambolic spill) of the signature uninhibited energy in their live performances.

Like an old loved-wrong country ballad, "In The Alley's" singing about a pair of hell-hitched honeypies who just can't seem to stop cheating on each other. They take what they call "corny callbacks" to 50's rock and 60's girl-group vocals and shock it all into the future with a contemporary punch of oozy surf and psychedelic swing.

The Hamtramck-based trio are going to release their new EP themselves, keeping to their independent operating ethos, with hand-produced cassettes coming soon... For now, if you'd like to see them live, they'll be performing at BFF Fest II on July 25 at the Mocad. More info on that show here: http://on.fb.me/1HfxKfV 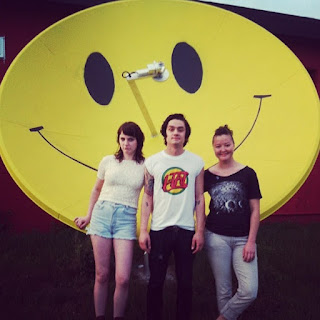