Greg Aubry had been mining the post-grunge gulch when he was fronting the rock trio Superbomb. Over the last year, he got involved with a handful of cover shows, including one particularly transformative dive into Nine Inch Nails' seminal songs, seeming a bit possessed by a Reznorian spirit... ...which leads us into The Analog Lights.

Aubry, who's always had a powerful voice, pare things back with this solo outfit, utilizing synthesizers in a way that subtly spotlights that melodic roar of his, scoring arrangements that blend his proclivities toward a heavier, dark, brooding rock with the sleek yet clangorous movement and presence of post-industrial, there's a bit of that heart-on-the-sleeve balladry of new-wave pop (percolated by the sequenced beats) but its definitely a lot more cerebral and a bit more pissed off than any of those 80's new romantics...


Yes,....and then there's Rufio Jones, who will be releasing his first full length solo album on bandcamp this Wednesday (July 15). 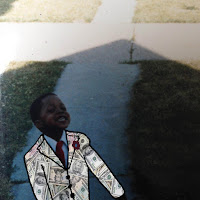 Jones is one-fourth of the hip-hop collective Detroit CYDI, along with fellow rappers Stryfe, Sean Uppercut and Doc Illingsworth, the latter of which produced the beats for Jones' solo outing titled Loot Suit.

Jones isn't interested in the cliched braggadocio baggage of half of mainstream rap music, with its swaggering bellicosity and boasting... He's more cerebral than that. But then... he's still playful, still nostalgic, still surging with a sense of humor, keen to inject thoughtful satire into some of substantially heavy conversations he's aiming to start with his lyrics. In fact, he could have a second career as a serial writer of retro sci-fi novellas... Great sense of metaphor, yes...but also with a propulsive vocal delivery (looped to mesmerizing and theatircal effects by Illingsworth) that keeps you constantly hooked, dodging strange synth sound effects standing in for UFO's, comets and myriad other fantastic noises.