When the throwback-pop specialists Blaire Alise & The Bombshells and their fellow Detroiters the spectacular spasmodic garage rattlers the Pretty Ghouls decided throw a party in Ann Arbor for their respective new albums, they knew they had to invite a pair of distinct and dynamic groups to elevate the evening. The Current was excited to see they chose the horrorshow fuzz-pop trio Prude Boys and Ann Arbor’s own blues-wrung psyche-rock outfit Buffalo Coven Party to complete the lineup at the Blind Pig (August 15). We checked in with all four bands to discuss their latest works and the importance of bridging the music scenes of Ann Arbor and Detroit. 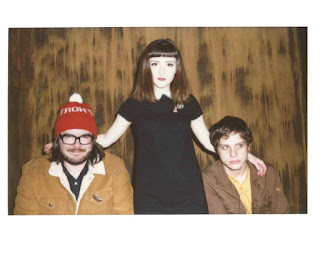 Milo: What’s new? What are you working on? How are things coming along?
Blaire Alise (of THE BOMBSHELLS): Another Day is a new four song 45” and I just signed a deal with a music publisher in Nashville called Carlin, who represent catalogs of James Brown, AC/DC and my favorite singer, Little Willie John! I’m honored to be part of such an impressive catalog! I’m going to be recording new songs for them very soon.
Matthew Snyder (of BUFFALO COVEN PARTY): Well, Jeff, the year has had a lot of changes, Aurora Adams left our band to have a baby. And guitarists Jad Dino Raad left the band to move to Ferndale for work. But we are soldiering ahead, currently with a new vocalist, Ariana Hedrick, and just keeping the music to a three piece (with Dan Gosnell). We’re working on new tunes that go back to the BCP roots, having departed our bluesy-psych style for more of a garage-y surf-y psych feel. We plan to have new songs ready by the end of the month but, we are musicians…so, we’ll see how those best laid plans work out.

Milo: Ghouls…Blaire…tell us about your new stuff.
Mz. Mockery (PRETTY GHOULS): To me, this 45 represents our growth; these songs time-stamp our progress as a band. I never really came into this expecting anything beyond loud crazy fun and I guess it’s still loud crazy fun, but we keep growing.
Li’l Queenie (GHOULS): “Outlaw Blues” (a Bob Dylan cover) is my favorite. It’s one of the first we practiced, with just TJ and I and the mic hanging from the ceiling because we had no stands yet. Our (version) is insanity. I love it.
Blaire Alise: I recorded with Jim Diamond at good ol’ Ghetto Recorders, which is great because we're always on the same wave length and can communicate through telepathy.  This time, I played all of the instruments except for drums (the Bombshells were busy that day).  The songs definitely have a different vibe than my first album.  As I've been writing more and more, I've been coming into my own as a songwriter and I feel like I'm getting in touch with my own sound. 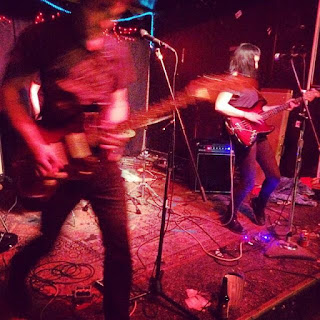 Milo: Prude Boys, you’ve been releasing special cassettes as a series. Tell us about that and the experience of finding inventive new ways to release music.
Quennton Thornbury: I mean, really…these days, the prospect of being a big name seems out of reach and, also, undesirable, ya know? And lots of bands get that these days so it’s less D.I.Y. and more D.I.T(ogether). The cassettes were just the cheapest way we could put out music, physically, and you just really have to have stuff out there. It's funny how small of a scene independent music is because we all have to support each other. We’re definitely looking at working with a local label to put out the tracks we recorded recently. We just finished four songs with our friend and musical engineer Ben Collins. 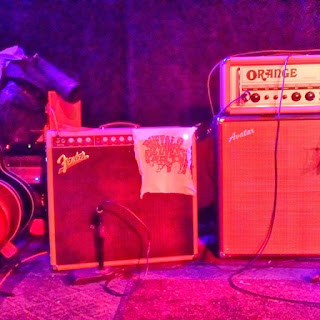 Milo: This show really bridges the scenes together, talk about how that adds to the celebration.
Dan Gosnell (BCP): We played our first show with Prude Boys, actually, and I feel like they just keep getting better and better. Pretty Ghouls really leave it all on the stage. Blaire Alise is just so solid. This is going to be killer.
Blaire Alise: Ann Arbor and Detroit can almost feel like two different states, sometimes. We wanted to make sure everyone, Ann Arbor, Detroit, Hamtramck, were included in all the record release fun! On the surface, we (Pretty Ghouls / Bombshells) seem like such different bands, too. But we come from the same source of inspirations; we just do different things with it. It oddly works!

Milo: Ghouls, you bring a lot of…let’s say infectious intensity…to your live performance. Can you talk about your approach to your stage show?
Mz. Mockery (Ghouls): Performing live is like creating a tornado.
Perfectly put…!
Mz. Mockery: Yes. The energy of what you're creating is the vortex of these palpable and tangible winds swirling around you. I love when people are dancing and sweating so close you can taste them. It's kinda the best shit ever.
Li’l Queenie (Ghouls): I never thought I had the guts. Turns out I do. I have it easy, I usually feel as if most people are focusing on Asia and I'm free to space out or strut out depending on my mood.
T.J. Ghoul (Ghouls): I tend to zone out when we perform. I'm not very conscious of the crowd or what the girls are doing. I'm just conscious enough of the music that I stay with it and endure the speed and energy at which we play. Afterwards I usually have all sorts of questions for the girls like, "What was the crowd like? What did you guys do? Was it any good?" as if I wasn't even there.

Milo: Anyone wanna talk some more about merging these scenes together, what unites them, what distinguishes them, from your band’s perspective?
Caroline Myrick (Prude Boys): We respect and love much of the music coming out of the Ypsi/Ann Arbor area, but it was just never really our niche. Detroit has really accepted us with open arms, and the people we've met and have worked with in the area have been insanely supportive and helpful. Hamtramck so quickly became a home for us, and our music has had such room and ability to grow here, that I couldn't imagine being anywhere else. We've lived a lot of places, but nothing has ever felt so right as being right here, surrounded by this city filled with our favorite people. It's fucking great.
Quennton Thornbury (Prude Boys): Plus, we live off pierogies, Indian food, Timmy's Tacos, and cheap beer, so we probably wouldn't survive anywhere else.
Dan Gosnell (BCP): These past few months (Buffalo Coven Party) played Echo Fest, Hamtramk Music Festival, Metro Times Blowout , Fuzz Fest, and a handful of other shows along the way. It’s great to see Detroit, Hamtramck, Ferndale, and Ann Arbor sharing a scene and getting lots of bands together. It’s like getting together with all your friends.

How have your projects been changing or evolving, lately….or is there anything new that you’re particularly stoked to work on?
Gosnell (BCP): Recently, we had the departure of a guitar player, a lot of the time is now exploring what we sound like with different people, and as just three piece. We have brought in Ariana Headrick on vocals, to round out our sound and she has been doing a fantastic job. EP and the future? It’s hard to say on exact time. I would love to say we have a double LP out tomorrow, but realistically I think we are just trying to write the best songs we can possibly write and find a place to record.
Caroline Myrick (Prude Boys): What we're focusing on right now is putting our new songs out on vinyl. We have so much material. There's no doubt we'll be putting more and more out once we have the resources, you know, like money.
Quentonn Thornbury (Prude Boys): Yea, definitely. We actually just got a new drummer too (Mac Starr) since Sadie went to be with her family in Alaska indefinitely. So I'm thinking we'll do some demos with him soon and finish the cassette series after we put out this EP of songs we recorded with Ben, just to keep momentum rolling. We come up with new songs just about every week and I think we're really growing as song writers and a band, so putting out songs that we recorded a year ago and have since scrapped seems useless right now.

How about you T.J.? How have the Ghouls grown?
T.J. Ghoul: Well…my mantra, when starting the band, was to strip rock and roll down to its most pure and minimalist form. I always talked about how the term "rock and roll" was used in old blues songs as code for "dancing and fucking". To me, that is the sole purpose of rock and roll music, to inspire people to dance and fuck. If you strive to do anything more than that with rock and roll music, then yer doing it wrong. That hasn't changed with me, that is still my intention with the band. The only difference now, after a couple years, is I think we are better at it. Matt Smith from Outrageous Cherry, who is one of my heroes, once told me, "When I first saw you guys it was just sheer insanity, like the Legendary Stardust Cowboy. But now you got melodic with the insanity, it's like Darby Crash recording for Motown!" I can dig that.

Dual Release Show for The Pretty Ghouls and Blaire Alise & The BombshellsAug 15th at The Blind Pig – featuring Buffalo Coven Party and The Prude Boys 9:30 pm / $7 ($10 for ages under 21) Visit blindpigmusic.com/calendar for more information.
#