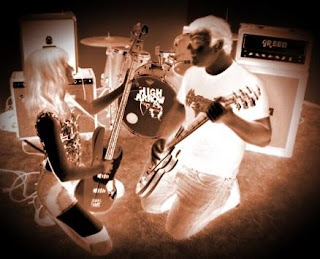 “My Orange Love” by High Arrow opens up their latest album and it thrums with a cavernous sounding feedback from the guitar as a chest-thumping drum beat starts busying itself with antsy/angsty fills. Instilling the sense of climbing, of breaking out, of something to surge towards…the intro continues to build until the guitar crackles into a snaky psychedelic swirl and lead vocals come in, guttural, big, almost breathless

And the drums keep pounding. The soundscape keeps filling in with greater amounts of bass and fuzz and strangely beautiful echoes.

You feel yourself losing your own voice just listening to those vocals and it feels fulfilling in a primal way.

This Detroit trio show a sharp sensibility for balancing the wild-eyed energy and entrancing billowy tones of psychedelia with a darker, unknowable dread manifested in a gritty, garage-stomp minimalism; they know when to fire every ultraviolet rocket at once and soar off into the stratosphere (as with “My Orange Love”) but also when to dim the lava lamps and black out the windows for a sparer, spookier séance of a rock slogger with “Wishing Well.”

But there’s also a substantial burst of motor-murk rock like “Plastic Heart Man,” with guitars that growl as though they were emitted from white hot exhaust pipes set to the steady jangle of a tambourine that sounds like it’s going to break at any measure. Or, take a song like “Behind The Warpaint,” opening just with vocals and a drums, the latter a furious/graceful spill spiced with frenetic accents and fitful fills while the latter, that scintillating voice and its hypnotic chants, starts to feel like it’s casting a very real spell.

Hot Love was mastered by Jim Diamond and recorded over at Woodshed Studios in Ferndale. With Tracey Thompson on lead vocals and bass and Adam Thompson on lead guitar, it features the drumming work of their usual rhythm ally Scott Boyink, along with Mark Tabor and Charlie Mccutcheon 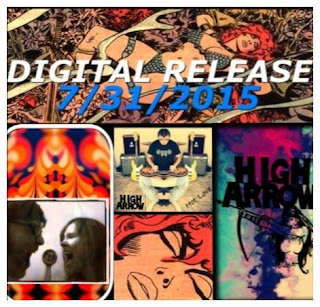