Double Winter, Child Sleep, Deadly Vipers, Little Animal, and, recently... Cheerleader, Wild Bore
& now...Jenny Junior. All part of my local playlist lately, each putting out some of my favorite songs of the year...

In fact, several spectacular bands, those above included, have had the spotlight widened enough to include them thanks to the democratizing efforts of the Seraphine Collective. The list rattled of above are not only some of the bands that have joined the Collective (by way of supporting and performing at consistent curated concerts and having works featured on a handful some of the initial SC mixtape compilations) but they also are some of my favorite bands amid the contemporary Michigan music scene. And I, we, have the Seraphine Collective to thank for that... 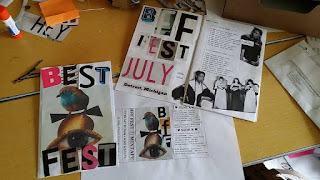 Each of these bands, from Casual Sweetheart to Rebel Kind, Dear Darkness to Moonwalks, feature women or female-identifying musicians in some capacity, be it as a full ensemble, as as instrumentalists on guitar, rhythm section or as lead vocalists. Beyond that, the Seraphine Collective prioritizes the participation of people of color and LGBTQIA performers, as well as women, with an ever progressive mindset when it curates its showcases and mixtapes.

Seraphine Collective, started by musician/writer Lauren Rossi in late 2013, works to affect an environment of inclusiveness in the music scene, particularly through the diversification of genders represented on the stages, in the spotlights. The idea, inspired by the feminist ethos, has spread into encouragement, to undermine the typical boys club trend of rock clubs and bring more female-identifying talent into that same spotlight, be it in music, performing, graphic designing, event organizing or, someday soon, label heads and venue managers.

It's been building steadily over the last 18 months and ever since last summer's inaugural BFF Fest (Best Friends Forever), it seems they've reached a point where there's no looking back... The music comprising Seraphine Collective and its overall mission seem to have reached an outstanding momentum. The spirit of welcoming, diversifying and encouraging...sparks brighter each month, with each new showcase, with each new compilation, with each new zine.

They'll reach a new level this weekend with BFF 2 at MOCAD - sponsored by the Michigan Council for Arts & Cultural Affaris
Saturday, July 25
2:00pm - 12:00am
$10
All ages
"BFF Fest is a SAFE SPACE and a supportive environment free from any discrimination or oppressive actions of any kind"