The State Of Michigan's "State Your Business"


That's a modest yet weirdly captivating suburban-chic music video for "Salty Shakes," the lead single from The State Of Michigan's State Your Business... The dual singer/songwriters sandwiching their respectively strange/suave sonic ideas together are Tanner Presswood and Alex Reynolds. They started calling themselves a group in late 2013/early 2014, when they each brought seven songs to the table (...or, to a bandcamp uplink) and called it a record... Those fourteen songs were their humble introduction to the Detroit music scene, but it's really this Friday with this record that we can properly say: How do you do? 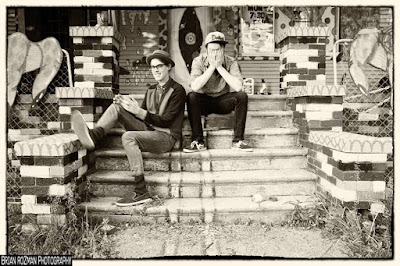 There's no use, here, in name-dropping... How about mood dropping? The calming disorientation... The excited bleariness,..The unsettling meditation... The muted cool... The wandering go-getter.

State Of Michigan sound like a cassette tape excavated from 1994, left beneath a burnt bed in
a studio apartment in Capital Hill outside of Seattle or maybe some basement in Dayton, with flecks of cat hair and a scuff mark from that time it had an errant skateboard wheel dropped on it...

Wait, is that too concrete o' picture? What isn't concrete is the evocations conjured by these purposefully hazily-textured progressions; the duo strum out these subtly trippy odes on these electrically-fuzzed acoustic guitars, set to stroll-able, day-dreamable rhythms and surreptitiously barbed with satirical, nonsensical or dadaist lyrics projected in these wispy voices loop-de-looing with swaying melodies...Every once in a while a discordant minor key punctures the pretty pastel pictures they're painting with their voices and their rustling guitars, but mostly, these are grunge-lullabies or Laurel Canyon-punk...

You'd wanna call it psych-folk because it's a pastoral singsongy sweetness that seems to be frayed at its edges with a potent bit of post-millennial weirdness.

Now, I've thrown a lot of adjectives around here. What I wanna leave you with is how enticing these short, sweet jams can be... A foam of muck and fuzz often flecks the surface of these freak folk ballads (...is this NuFreakFolk?),..but at its heart, these are kinetic pop ditties; simple and strummy, sliding and shimmying, strange but sincere!

More sounds from the State Of Michigan here.