[editorial preface to return to music coverage]
It happened. History. And a storm of emotions.
And hopefully, inspiration.
Remember, that if you want change - you have to be apart of that change. As our new president said, we have a lot of work to do.

That said, let me just air out one final thought...The beastly ignorance that still festers in the corners of this country. As I was walking into work one day, a conversation behind me was spoken too loudly to be ignored. "I cried myself to sleep last night," they said...and I shrugged thinking, hmm...that could be because it was tears of happiness...

Alas, the person mumbled something about Hussein, and... "that's his brother," or some other kind of wretched reprehensible delusion. I'd like someone to explain to me, scientifically, how a white woman from Kansas having sex with a black man from Kenya somehow creates the brother of Saddam Hussein.
Better, explain to me how this person whom I will assume has at least graduated high school, could allow their mind to be so porous to nonsense. Can the next thing we "change" in this country be the lingering idiocy? If we're on a change-kick lately, let's really amp it up and start refusing to suffer the ignoramuses
Another point - there are also some out there ready to remind us that the world still sucks. People are still dying, the economy is still crumbling and...most importantly, I will agree to highlight that, racism still exists...

But what good is it to just point at it...We've taken one step - and elected the first black president of a country that dealt in the slave trade for more than 200 years.

So, the horrors of the world don't magically go away, just as the ignorance of that person at my work doesn't go away...We work toward it. One step is over. Now, go beyond voting for change. Be apart of it.
Okay... the great redemption of a generation occurred, so now we, here at Deep Cutz, can get back to MUSIC!!! and lots of it.
~
Here's an Un-Cut version of a Girl Talk interview by music writer (and stalwart Cutz-contributor) Thomas Matich, regarding cyborgs, lab-top use and classic Detroit Techno 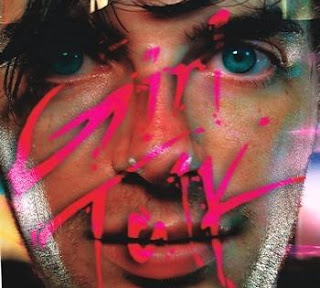 Girl Talk Just Wants to Have Fun
by Thomas Matich

A Girl Talk concert is like a sweaty can of sardines going berserk to the hip-hop powered mash-ups of the last 40 odd years of pop music. Hailing from Pittsburgh, former bio-medical engineer Greg Gillis has redefined the art of sampling music with his trusty duct-tape bandaged laptop, releasing acclaimed albums like Night Ripper and Feed The Animals that are more 21st century concerto than CD. Real Detroit chatted with Gillis in anticipation of his upcoming sold out show in Pontiac, where last November he left no wallflowers untouched.
TM: What is the last movie you watched?
GG: I have a tour bus and we jammed out on Terminator today.
TM: They’re making a new Terminator with Christian Bale.
GG: That’s what I heard. We started talking about Terminator 3, which I liked, I was feeling it, I didn't think it was garbage or anything. The extension of them chronicling how machines could actually start to become self-conscious, I thought that was cool.

TM: Speaking of cyborgs, I feel like my laptop is an extension of my body. Do you feel that way?
GG: It’s definitely for me. I think for a lot of people, it’s your little buddy, especially I always have the laptop with me, when I'm alone and chillin' out that’s what I go to for entertainment and that’s what I also go to for work and performing live. It's hard to even articulate what it means at this point; it’s something beyond a piece of electronics.
TM: People watch porn on their computer. You perform with your laptop and take care of personal business, but do you also take care of some OTHER personal business?
GG: The laptop I use for music, I try to isolate that as much as possible and stay offline with it. I have some other computers just cause the worst thing you can ever do as a performer is get a bunch of crap on your computer you don’t want.

TM: I’m guessing you get a lot of the same questions in interviews, so what do you want to talk about, what’s on Girl Talk’s mind?
GG: I’m cool with talking bout whatever, if you wanna talk about the Detroit Lions, Detroit techno, Pittsburgh sandwiches, Pittsburgh Steelers, I don’t care; I'm here for you.
TM: So the Steelers? Are you a fan?
GG: Yeah, I always follow the Steelers. The Steelers run the city and if you’re not into football, you probably don’t have a soul. It’s funny there, even people in bands and underground music, people you wouldn’t expect to be football fans, like you’ll never see a show on a Steelers Sunday and you’ll see people wearing jerseys on the weekend of games and it kinda ties the city together.
TM: So you brought up Detroit techno, is that something you spent time listening to growing up? GG: I listened to more of the ghettotech stuff, but my background in electronic music is more from the experimental end. I really got into electronic music in the late ‘90s when kids in my high school were going to raves and stuff like that. Back then, I was more interested in people using electronic music as a tool of punk rock, pushing the limits and not needing any traditional musical talent and just breaking down the barriers and getting wild with it. 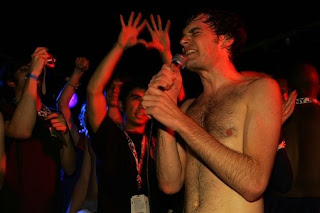 TM: How was playing at this year’s Movement Festival for you?
GG: I had a great time. Everything was very interesting; it was almost too much to wrap your head around.
TM: I got into a few discussions about the idea of you being booked for the festival in terms of how the purists would view it.
GG: I was pumped at that opportunity, because this project in the early days, I was always in my mind an outcast figure. I would show up at venues and play with rock and rap groups and get up there doing Top 40 remixes and getting in people’s face, it didn’t really fit in any niche. Sometimes I’d win the crowd over and other times I would piss everyone off and someone would try to punch me in the face and break my computer. That was the background of this project and I think a lot of people don’t understand that, I think people just see the shows now and think it’s this guy who remixes pop music and jumps around and everyone likes it. So I don’t think people understand the confrontational nature that this project is rooted in. So being asked to play this festival got me really pumped, not necessarily to piss everyone off, just as being acknowledged. But the festival was great, I had a blast.

TM: Detroit has a reputation as not being a dancing crowd. But people go crazy when you play here. Is that intrinsic to you or does it vary by city?
GG: I think Pittsburgh is on a similar level. Some nights, people lose it, depending on the setting. But in general I think Pittsburgh is kinda known for being a standstill crowd. But the shows I'm playing now in Pittsburgh, it gets buckwild. I think part of the reason people are going crazy is the anticipation of the event and presentation of it. People are familiar with this music as party music and because of that people know there's going to be a distinct beginning and end. I have an hour of insanity and the way people come out to the concerts ready in their mind, “we have one hour to lose it.” You have to drop your guard to be into this project, drop that too cool for school style, your attending a concert by a guy named Girl Talk and he samples all forms of pop music.
TM: When I met you at the last Eagle Theatre show, you were all sweaty and drank some of my beer. I’m guessing you’re always meeting interesting people and have tons of stories.
GG: Dude, I could write a book. I often times wind up at lots of parties. It can be a very surreal experience walking into a party where people will cheer for you like it’s a concert. It's completely bizarre. So often times I'll end up sleeping in a dorm room or on the floor of some squat house because that’s where the evening has taken me. Every night I like to take it over the top and have an adventurous party.

TM: People familiar with your back-story know that you were a bio-medical engineer before Girl Talk took off. Will you ever go back to that?
GG: I don’t really want to go back to it but I’m loosely planning on doing that. For music, there’s no way I could’ve predicted it would’ve become like this, it’s truly a fluke in my mind. I’m really happy about it and think it’s awesome, but it’s just really bizarre. But I can’t imagine this lasting forever. I think doing any form of dance related music is a bit more functional than a traditional band where as if you’re a band and write an album that everybody loves, people come out to the shows and if your next album doesn’t do as well, the shows can immediately stop selling. But if you’re doing dance music or DJing, it’s more long-term because of the functionality of it. But I just can’t imagine sustaining this as a career for a long time, if I do that be awesome. I’m more excited about creating music for right now and if I decide to do a noise album and everyone hates it than that be cool. I’d rather work with people’s minds than money and get people to think about music in different ways than milk this for as long as possible.

Great interview. I'm looking forward to Girl Talk in Pontiac: Round 2 next week!