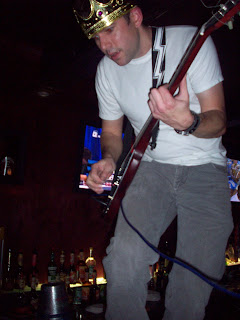 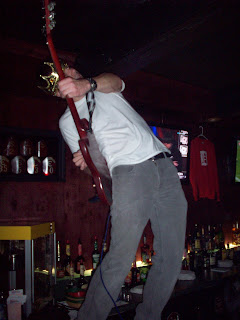 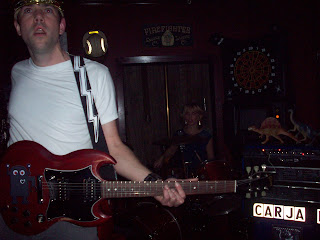 I looked around at all the locals, broad shouldered toughs downing uncommonly cheap beers all rousting together in packs of 3's or 4's like scheming hyenas; and I'm thinking, in an hour I'll be jumping around in front of them wearing a creepy old-man rubber mask and shouting in their faces…

But then, I quickly realize that Bri will be up there before me, wearing a crinkled plastic E.T. mask, throwing robots around in disregard of any one's nearby table-set drinks and jogging in mock-boxer training hullabaloo theatrics to the theme of "Eye of the Tiger" and I'll be put at ease. The dude always blazes a trail for me.

Deeper than that, he ends up blazing a trail for the wild side of everyone in any room, particularly these gurgling hyenas, stomping and swaying ever more steadily and recklessly as the night went on... 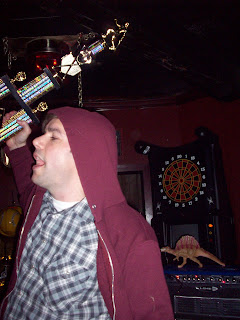 As we walked into this doesn't-look-like-much-type o' joint in a long rectangular humble exterior along a dimly-lit stretch of nothing special road where Dearborn meets Detroit, we weren't sure what to expect…just that there was the potential for a bit of blue-collar stress-relievin' pummeling and that a one-man band with toys and avant-gard electro-noises and hard-shredded guitars may end up being the target of their bellicosity.

Quite the opposite…well, sort of…

Suffice it to say, it we did it up proper to celebrate the 3rd anniversary of live Carjack shows on that dark and ricocheting night at Halligan's. Rabeah and his Electric Lions were "out for blood," as they often are, stately, focused, driving psychedelic pop with now-characteristically mind-blowing solos and tight rhythmic chemistry – grand, golden, smoky flavor with lots of swing and gusto. A planned half-hour set welcomingly rolled into 45+ minutes, but the crowd was starting to really amp up in energetic waves toward the modest stage. Carjack and I shared a few glances of eye-contact and shouted exchanges over the impressively loud sound system…airing slight apprehensions of having to follow this… 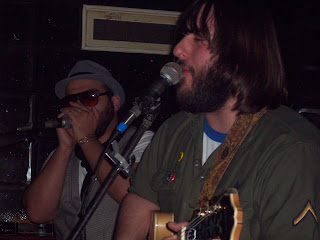 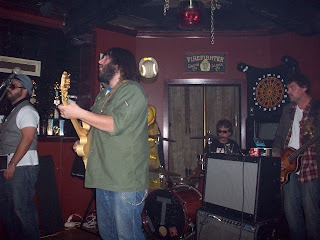 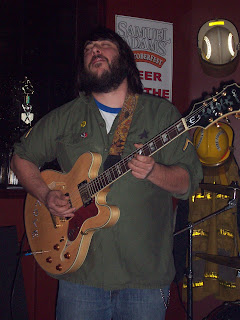 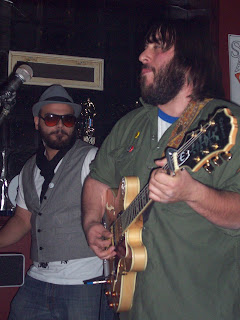 But it all turned out great…great and crazy and nearly devastatingly brutal.

It had been a while, this being his 90th show, for Carjack, that we had the whole "crew" of the girls, my brother, Justin Audio and Miss N. all gathered together…let alone in foreign territory. But we all put each other at ease by slowly lubricating our own souls with the cheap drinks and steadily dancing into a nice grooving looseness to the closing songs of the Electric Lions.

(it should be noted Carjack's own penchant for seeking out new, more unconventional or less-treaded on venues like Mocad, White's Bar, Vesta House, LJ's, Scrummage...I mean, hell, his first show was at Mephisto's! Sometimes you have to go a bit underground, at weird times in weird places, to catch a great Carjack show - which adds to the singularity and uniqueness of certain shows. It's like Black Flag traipsing their way through the South, out of place--but that what makes it great.)

Anyway, midnight rolls around and the mantra becomes: Let's go for broke.

The set started off fairly normal and steady, Eye of the Tiger allowed Bri to explore the newly refurbished room, with it's recently redone wooden floors and tv's glowing from many different directions. All My Feelings Denied properly introduced the beat-heavy destructo-punk styling of Carjack to the more rock-ready crowd Things were going smoothly indeed, but it seemed to accelerate when Miss N. took the spot behind the skins and added her live on-point percussion to the Carjack theme song – which eventually led Bri to mounting the 4-foot-high bar, having to bend his neck right below the ceiling as he triumphantly wielded his guitar in a noisy tear over the heads of the now fully percolated brew-dudes. 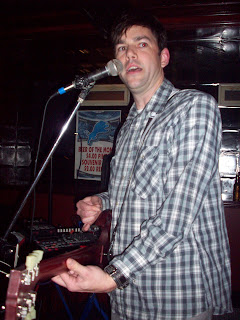 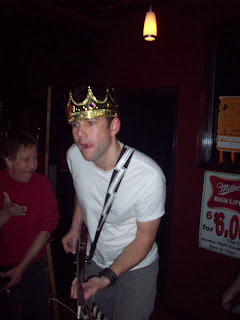 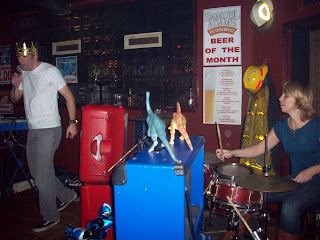 Then the set went from the more electro-dance-ready flavor to the fiery punk setting as I scurried up there to grab a mic and sing on "Damaged." Having grown up on Black Flag and Minor Threat, it's no surprise Bri penned such a rampant and rousing kicker (with old ally Shane O'Mac) that had now been developed for the new Carjack project. At this point, the avalanche began – with Miss N. pounding away and myself jumping around in circles at the edge, literally inches from falling onto the heads and shoulders below me, I screaming "DAMAGED – IS WHAT I NEED!" and pumping my fists out into the air, jumping around as though I'd been set to self destruct and needed to get this last bit of grit and insanity out of me…which led to Justin jumping onto and off-of the stage repeatedly throughout the song. The crowd of a dozen or so bodies massing at the stage started to move as one, not entirely violent at first, not entirely like a mosh-pit but with the right conditions and with the same vibe. 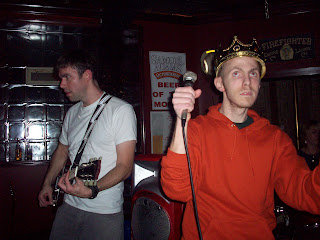 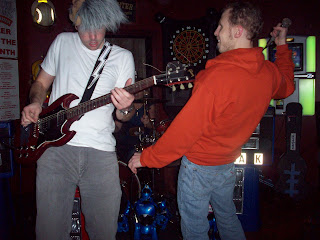 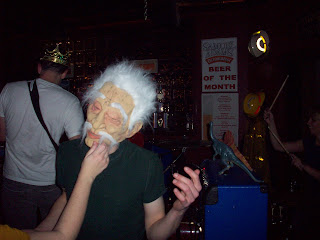 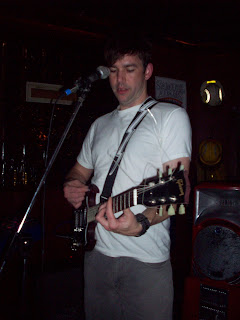 Then it started to blur. I just remember a lot of movement, a lot of jumping and bumping and yelling…and Bri's guitar shredding away and meatstick-jocks screaming choruses back at me and pushing by me to then jump onto Bri's shoulders shouting at him…but they were loving it. This wasn't the fist-clenched what-the-fuck-is-this reaction we'd expected…these burly dudes were digging it! Even if they were expressing it in a quasi-destructive manner…they still wouldn't let Carjack off the stage, demanding 2 encores – with Justin joining in on guitar for "Telegraph Road," sufficiently doing to his guitar what we had done to the crowd, revving it up, stirring it violently and letting the wayward fizz and fire fly where it may…!

Robots came out and started dancing around – Justin almost got into a fight over a stolen beer and I gave in and just started pulling anyone I could, with me, onto the stage to join in on the ceremonial arms-up/balls-out release!

The rest is a complete blur…

The next morning I run into Justin, cool and casual with his hands on his hips.

"We kinda tore that place down last night, huh…"

Hope to do it again soon. 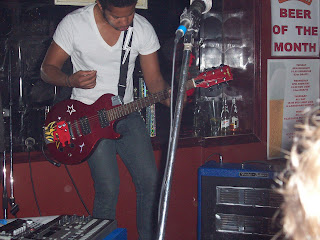 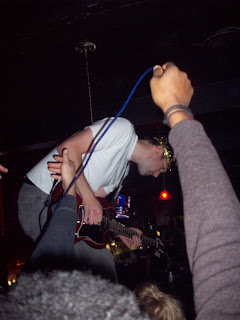 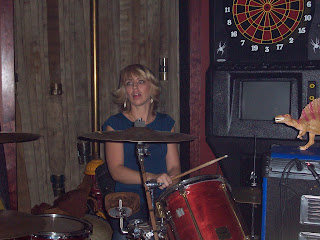 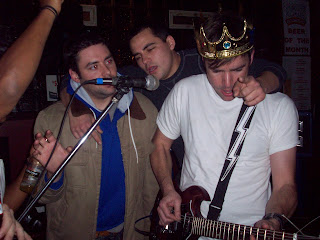