"…Detroit is like a compost pile for the creative, always was and always shall be…" 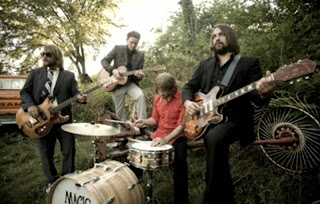 Magic Shop has been a long-time coming.
Its genesis reaches back to the late 90's, to a time that, when referenced, seems to always be called "the Gold Dollar Days." There, while playing in the Wildbunch (the origins of Electric Six), guitarist Steve Nawara met guitarist Mark Craven, who then played in They Come In Threes. They'd always spoke of potential collaborations, "but normally those conversations would take place at 3 a.m. and by the next morning all would be forgotten," said Nawara. "So, time rolled on…"
While Nawara continued to play with the Wildbunch and eventually the Detroit Cobras, he said he started feeling "like a hired gun that wasn't allowed to shoot…I had a stack of songs that were beginning to rot on the vine. It took a lot of determination to leave the touring and money behind but I knew if I didn't I would continue working at low levels of potential. So in 2006, I said goodbye and it was probably the best decision I have ever made."
So it's 2006 (the same year Nawara started developing the Beehive Recording Co., btw); he soon meets bassist Jake Culkowski, who'd been playing in a group called Hoss Burley. "When I saw him play, I immediately liked what I saw. He could move around the bass and I dug his style. After many long nights of booze and cigarettes, it became obvious we had to get something going." Culkowski helped Nawara "work out the kinks" of a few new songs and encouraged him to start playing them on a stage.
They met drummer Dave Vaughn at Slows BBQ, "and," said Nawara, "I had heard the stories of what a killer drummer he was…Dave is hands down one of the best drummers in Detroit." They started out practicing as a 3-piece, but soon called Craven back up and "Magic Shop came to life."
The sound, the vibe…is a hearty, heavy head-bopping lash and strut – a sunny country swing and a soulful wail – with true grit blues at its heart; it launches a shoulder-shimmy hook-and-spin pop out, brazenly, in every direction. Jangly golden-brown rhythm guitars intertwine with a fiery high-toned lead that sets that woozy freewheeling barn-dance vibe but the smooth bass and punchy drums lock so tight that the sweet let-loose madness of classic 60's garage pop is inescapable
The band joins a strong Thanksgiving Eve bill at the Lager House, with Lee Marvin Computer Arm, Gardens and Terrible Twos.
The Deep Cutz Interview: Magic Shop
Milo/Deep Cutz: How long did it take before your first show (which, was The Park Bar, with Readies?) how did that come about?
Stephen Nawara: Actually, our first show was at Slows BBQ at the St. Patricks Day Parade. We only had 6 songs and, shit, was I nervous. I was pacing back and forth in the basement drinking Jamesons but when we went on stage, a huge weight was lifted, all my anxiety simply disappeared, and the audience went nuts . It was an incredible day.
Our second show was at the Park Bar with The Readies. It was then, playing to a sold out house, that we realized that we may be on to something.
Milo: How did the first few months of the band go?... how did you find what worked?
SN: To be honest, this band has been on the same page from the start. I have never enjoyed playing in a band as much as I do now. All we have to do is count 1,2,3,4 and something always happens. I love the songs Mark is writing, Dave is always surprising me, and Jake is my favorite bass player around. We are brothers.
Milo: Going back to the Wildbunch in the not-as-internet-prevalent-mid-late-90's to now, being a band starting out in a particularly hyper-blogged about era (shit, even I have a blog) what was it like to have just-about-your-every-live-show blurbed about, somewhere, even if in one sentence quips...
SN: The Digital Age is a wonderful thing. It's the voice of the people, whether you like what the people say or not. Though we're far away from our every move being talked about, we all appreciate anytime someone writes about us. Power to the people!
Milo: How would you describe your sound, your styles...and maybe, if you want, go into your (magic shop-specific) influences…
SN: Well it's important to realize that all music is based upon the music that came before you and when music is no longer in present day use it becomes compost to fertilize your own creativity and as an artist it is your job to grow something in the present moment. We definitely believe in self responsibility when it comes to music, never relying on technology to enhance your music. So roots music is priceless to us. Roots music to me could be Blind Lemon Jefferson or Black Flag. Just as long as it made by hand with no studio trickery, we tend to like it and let it influence us.
Milo: …favorite experiences of the year so far?
SN: The Park Bar was definitely a highlight, but to us the most exciting thing was playing with all of these great new bands popping up in Detroit. Gardens, The Sugarcoats, Four Hour Friends, Octopus, Lee Marvin Computer Arm, Silverghost, The Readies, and I'm sure I'm forgetting others, but we are very happy to have our name next to theirs. Talking about using music to fertilize your garden, Detroit is like a compost pile for the creative, always was and always shall be.
~
The band will soon give their music away (for donations) through the Beehive Recording Company. They'll soon hit the road, touring Michigan and the rest of America – with hopes of a full length by next Spring (for download and on vinyl). Their first single will be out on Italy next week.
http://www.myspace.com/magicshop313
Posted by jeff milo at 12:57 PM