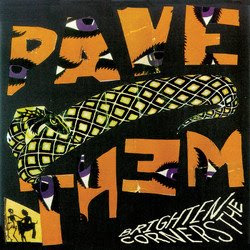 (thoughts on the re-release from 97)

Lester Bangs, whom, the Metro Times will remind us, it is a cliché for me—being a music journalist—to defer to in any wisdom-seeking manner, once said, "A hero is a goddam stupid thing to have in the first place and a general block to anything you might wanta accomplish on your own…" The more I keep quoting you, Lester, the more of a hero you become to me – and the less I get done on my own…which may start to explain why I'm having a hard time starting this Pavement Reissue album review.

The coffee cup is downed and the record's spinning and I'm going over all the anecdotal stats of this 1997-indie-rock classic, but nothing’s coming…which is baffling considering my supposed undying love for this band – and willingness to spew longwinded orations of their lore. But, what more can be said about an already mythologized band.

We say to ourselves, 'Wait a tick, you mean-ta say there was "indie rock" back in 1994? And it wasn't strategically co-opted as some satellite-radio-selling, big-festival-raking brand? A shirt to buy at Hot Topic?’

Brighten The Corners was the Stockton, CA-based quintet's 4th LP (of 5) and (so far) all 4 have gotten the beefed-up redux-treatment –providing 2 discs with nearly 30 tracks of distinct b-sides and singles on each release. Meaning, before 2002 (the year their '91 debut Slanted & Enchanted came back onto the stands, probably at Borders for the first time) we'd only had…70-some-odd available songs on the market, between all the standard releases…but that now, after 4 re-releases…this new breed of internet-infected listeners (heavily influenced by electric eulogies from new online mag's and absolutist sites like Pitchfork) can cull at least 200 or so songs from the band's available catalog, b-sides, singles, live fuck-offs and the like.

Now, whatever my tone may be so far in the review, bare in mind that even I, myself, submitted back in 01, that they may have been the Beatles of our generation and that Brighten the Corners, with it's shambled charm, spacey acid-rock leanings, hard-fuzzed hooks and new shaggy looks on alternative hard rock, is probably my favorite release from the rickety bunch. That said, is it so healthy for me, and Pitchfork, and Stereogum and whoever else, to continue padding the pile of messianic declarations?

What you should take from BTC – was that it was simultaneously a "come-back" and "the beginning of the end" for the band. Coming off the shrugging skunk-eyes they received from critics for their criminally misunderstood spiny, shaky, fuzz odyssey, Wowee Zowee (95), they regrouped in Portland OR (a move spearheaded by their then-ever-increasingly thorny frontman, Stephen Malkmus) and made, you could say, a "give-em-what-they-want" type album, flying back on a zephyr of great reviews (and a European tour) to save indie-rock and energize attention onto contemporaries like Guided By Voices and Built to Spill.

But Malkmus was breaking more away from co-founder Scott Kannenberg, the singer shaved his head and started skirting interviews. A year later (98-99) they made swan-song Terror Twilight, (upon which Malkmus dominated the writing and became embattled by rough-punky noise-rock fans for its comparatively polished pop). The band broke up before the millennium and here we are now…awaiting the last two knocks on the legacy door – the Twilight reissue – and finally, the ceaselessly rumored/prayed-for reunion tour.

“Side 2” of disc one starts off with the murky BTC outtakes, a drawn out alteration on Twilight's 'The Hexx' becomes even more haunting and guitar-drudging, followed by the Jester-y kartwheels of 'Cataracts' and some admittedly fun, fuck-around scraps for the 'Stereo' single, like 'Westie Can Drum' and Kannenbirg's melodramatic 'Winner of the.' We close up disc one with singles from Twilight: the all-out gem of jangly 60's psyche-pop-n-country twang, 'Harness Your Hopes' and the rousing road-tripper 'Roll with the Wind.'

Disc 2 gives us the entirety of single flipsides from one of their most beloved BTC pop-tunes, Shady Lane, (which sheds light on the sparse and punchy synth-whirl of 'Cherry Area' and the dueling guitar majesty of my 2nd favorite Pavement song, 'No Tan Lines.') That four-track-punch slides into another package of recordings from the BBC One, back in January 1997, which makes 'The Hexx' come off palatable and 'Harness Your Hopes' becomes less-so as a stripped acoustic—but it's wrapped up nicely by a poignant cover of one of their strongest influences—Echo & The Bunnymen's 'Killing Moon.' (Take note, Donnie Darko fans.)

The middle section drags with even more obscure and disoriented-day-dream interpretations of BTC songs like 'Chevy (Old to Begin)' and the abrasive sequenced-percussion, Fall-esque alienation style of 'Oddity.' Long-time fans and record-collectors will get drunk on the KCRW Morning Becomes Eclectic takes with the grin-inducing (if by title alone) grind and blurt classic space-rocker 'Neil Haggerty Meets Jon Spencer in a Non-Alcoholic Bar' and the spilled out call and response druggy dirge-drone march of 'It's a Rainy Day, Sunshine Girl.' But oh, the guitar stabbing errantry and ear-bending roll of the splurge-y 'Maybe Maybe.'

Wrap it up with outtakes of the exclusive, noisy theme-songs they made for their appearance on the 3rd season of to Coast and call it a day!

I love Brighten the Corners…and the geeky fan inside of me is thankful they had enough material to be scraped up for a re-release, so I could return to all the nooks and crannies of this warm, golden, strange, buzzy rock. No doubt, this is the record that the Mainstream wanted Pavement to make after 92's Crooked Rain Crooked Rain fostered their biggest hit 'Cut Your Hair' and put them on the verge of success…But Wowee Zowee burned fair-weather fans so much that by the time they wrote the irresistible and catchy pop-rock of the squiggly and visceral 'Stereo' and the doe-eyed, folky-hooks and labyrinthine lyricism of 'Shady Lane' that they weren't being listened to by the right people anymore…they may have even lost a few of the Slanted hardcores at that point…who wanted more sensory-scratching freak-fests and punk-ified brain-frying derring-do.

I'm sure of one thing – the new fleet of internet indie-rock tastemakers like Pitchfork were certainly still listening at that point, back in 97…and we've been in a swirling storm of ever-returning reverie and re-releases since…with critics always having to re-explain, mid-review, the vitality of Pavement.

But don't forget what Lester said about heroes. Yes, they were great. Yes, probably the Beatles of our generation. But, it's 2009 now…what are you gonna do about it? What are you gonna do next? You've heard what Pavement's got…almost every song they've ever done by now…, so what do you got?