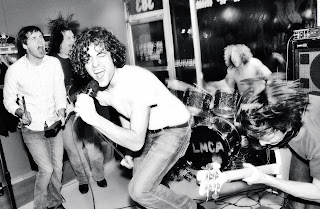 Lee Marvin Computer Arm bring me back down to earth.
Catching up with a band after nearly 6 years of up-down-splatter-around volatility, shaky tours, at least two "break-ups," (one of them mostly real) and the raining down x-factor of 'real life,' means you're bound to get a pricklier worldview when you go fishin for anecdotes.
"…nothing brings a band together more than punching your drummer in the face," says bassist Zachory Weedon (currently touring with the Dirtbombs, one of many exterior engagements, unique to each member.) Worn by many things, be it the road, the bottle, the smoke & mirrors, the same ol bullshit, the sextet (including Zack's brothers, singer Casey and guitarist Corey, drummer Todd McNulty, guitarist BJ Horn and Jason Eggert on brass), were first perceived in 03 (then with Matt Jones) as MC5 revivalists, later, as spazzy-grimy punk exploders, and now, usually, as "that crazy live band with the trumpet" and then, "didn't they break up?"
In our communiqué, my own naive outlook on the sometimes-fleeting-excitement of scenes gets turned on its side by a band that learned the hard way what happens when you push out beyond the boundaries of your hometown.
“It’s very easy to get caught up in this scene and feel so appreciated by these revolving people that you tend to forget that there is a world outside of Detroit and they don’t give a shit about you.”
And that's nothing against Detroit. Far from it, says Zack; what the band would want to emphasize through that is, don't let it make you lazy. Listen to 'em, they've been there - they've been to the top of the Detroit mountain (not that it's an easily conquered mountain) and rode waves of good local reviews and started leaning towards the expectation of inevitably being discovered by some golden-ticket-music-biz dude, only to head to New York on a tour and find only 30 people at their shows.
It's just, Zack concluded, that "people get too comfortable in their scenes, and it's not that we don't appreciate being enjoyed in the Detroit scene, but you have to reach higher. So,…the objective, of the band is to really work to get outside of that, really push ourselves."
So, being some kind of a documenter on the scene – I find myself caught between these dueling ideas of “best city ever” vs. “same old shit," and I, myself, after talking to 'em, started looking outward toward the bigger world beyond the Ren-Cen. So, yes, in a sense, they bring me back down, by qualifying enthusiasm – but, in Lee Marvin's case, I can't help it, the enthusiasm can't be quelched - they're simply an inspiring band...in a raw, slap-in-the-face sort of way; I'm drawn, and yes, still enthusiastic, for the tremendous fire of their live shows and the ripped-and-riled vigor of their energetic sound… 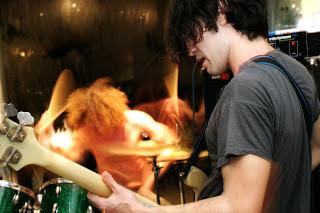 The band was formed in 2003, spearheaded by Corey, who wanted the trio of siblings (then playing in an experimental band, The Dusk) to try on a bit more rugged, traditional rock n roll. Which, when it comes down to it – is all Lee Marvin Computer Arm really is…straight, root, blunt, ROCK N FUCKING ROLL.
Simply, they're an incomparable live band, potent, rousing, relentless, self-destructive - LMCA have always been a study in human energy – its exertion, its collisions, its boundless potential. Here, they, almost nonchalantly, puncture my own naïve red balloon of fleeting excitement in scenes ("…we could give a shit,") while also charting their past of fiery tears and erratic turns and laying out what's coming up next, besides perseverance.
Deep Cutz Interview: Lee Marvin Computer Arm
Milo: Catch us up
Zachory Weedon: …just trying to continue [LMCA] under new circumstances. We realize we haven't reached as far as we could…We had a talk and came to the conclusion that we can really make something out of this if we put in a little extra effort. With new schedules: Jason's in law school, Casey's a full time teacher in Chicago, Todd being Todd, Corey's in the Sugarcoats (with Todd), we're going to have to work harder but it's probably good for us. We plan on having a single out in Feb. (either Cass or Italy) then hopefully a full-length by summer to tour on.

Todd McNulty/Corey Weedon: ...So its been hard to get together as much as wed like to, but we've been writing some new songs and keeping it kind of loose.

Milo: How do you feel of this town’s long-held conclusion of your instability?
ZW: Well, we are unstable! That’s what you get when you throw two straight-edge kids (Me, Casey), a total stoner (B.J.), two heavy drinking party animals—one being a total fucking maniac (Corey, Todd) and a law student (Jason) and you mix them in a little pot. You get fistfights, yelling, screaming, leaving people in random cities, constant arguing, quitting, blood, piss, broken shit. We’re just too comfortable with each other. We’ve known each other all our lives, my mother talks about B.J. like another son to her. I’ve known Todd since 8th grade. Yes we’re unstable, but what good band isn’t?
TM/CW: its no bother to us, we love this city and we love playing rock n roll. You know, we're like a family; 3 of us are brothers and the rest might as well be. we fight, sometimes with fists, but its always water under the bridge. fuck it 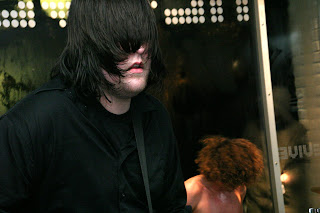 Milo: What made you come back?
ZW: After we broke up, about three or four months after I started to feel like we made a mistake. The band hadn't eroded it was just one incident that lead to the break up. So we just needed a little time so we could get over not hating each other.
TM/CW: -time. we needed a break and playing in other projects has breathed new life into this band i feel. 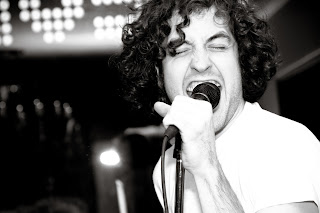 Milo: Has the band changed at all, for you, over the last 5 years?
ZW: I think nothing brings a band together more than punching your drummer in the face. or if opening for the Dirtbombs in Chicago you show up without a drum kit or a decent guitar amp, or a trumpet player or a second guitarist and you go take a huge shit on stage and Ben (Blackwell) comes up to after the show and says "you guys are great, but get your shit together" that was kind of a wake up call. it was then the half-ass shit had to stop.
TM/CW: Basically when we fell off the map we were just getting our sound where we wanted it, and the time away has given us the time to write. all we want to do now is make one full length that will be good to put on 20 yrs from now. and plan on getting in the studio in december.
Milo: How long has the current line up been in place?
ZW: It’s funny we replaced Matt our former guitar player with our old drummer B.J. who we kicked out two years prior. I guess our band wasn’t dramatic enough we needed another element. So three years.

Milo: …meaning of the band name?
ZW: Lee Marvin was a man of few words in his films. We kinda of carry that into our live set, and how we deal with our band. Computer Arm is just if you created a new version of Lee Marvin. 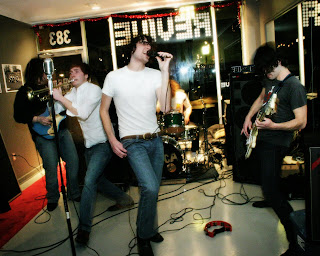 Milo: And the live approach?
TM/CW: It's more exiting now because we dont get to play as much as we used to, and now we are more concerned with new songs and its just always fun to go up and play to the point of exaustion.
ZW: We just play how we feel, I guess we're an aggressive bunch. Our last show Jason's head collided with my bass and he had to get stitches. There is never planning involved, we're just excited about the music we play.
LMCA has new material ready, with a new single on the way (with Danny Kroha producing) and an LP for next summer.
11 /26 Lager House