The Duchess and The Duke! 9 / 7 - Pike Room, Pontiac (interview by Eric Allen) 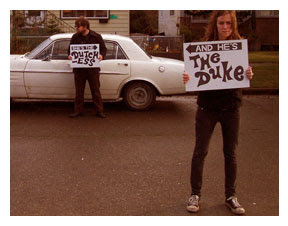 All Hail: The Duchess and The Duke

With his husky Mick Jager-like howl, Jesse Lortz has been at the forefront of many infamous punk bands like The Fe-Fi-Fo-Fums. Yet, only when complimented by the beautiful voice and instrumentation of Kimberly Morrison does he truly become the newly buzzed about duo, The Dutchess and The Duke.

With the competition of their new self-titled album, Lortz and Morrison have created a masterpiece. Released by Hardly Art, the duo has touched upon everything from heartfelt folk songs to raved up Stones howlers and mini Cohen masterpieces. [I] chatted up Lortz while he was driving to the group’s show in North Carolina and talked about the hype, writing songs and depression.

Eric Allen: Is it surprising to be getting so much buzz with Duchess and Duke after never getting much outside of the indie circles for Fe-Fi-Fo-Fums and Flying Dutchman?
Jesse Lortz: Not really. They’re good songs and it’s the first time I’ve been on a label label. I mean, it’s nice. I don’t mean I expected, but it’s not a huge surprise.

EA: So having a label like Hardly Art is really helping you guys a lot?
JL: I mean it’s on the radio and it’s actually in record stores and it’s being reviewed. All the bands I’ve been in I’ve just put out on my own and I’m horrible about running a business so I never send out shit to get reviewed or anything like that. I just sell them from my house – mail order. They are all super nice and they gave us some money to record with.

EA: Has it been a big help with touring as well?
JL: Uh, yeah. I mean they help us with car rental and stuff like that. It’s cool because we have records in stores in every big city and they know we are coming.

EA: Who are coming out to the shows you guys are playing? Is it the same crowd who would go to a Fum’s show or what?
JL: No way. When we did the Fleet Foxes tour it was already sold out before we ever even went on tour with them. Most of our friends couldn’t even come see us. On this tour, we were a featured artist on Myspace, we are getting a lot of strangers or that read about it in the paper or have a friend turn them onto it. It’s a good mix of a lot of different people. It’s really cool, but you know people who like the Fums and liked it for being good songs come and they are like, “This shit is rad,” or people I’ve known for a long time or Kimberly has known. It’s a good mix.

EA: When I listen to the record I sometimes think you are pretty depressed dude. Does writing these songs help you feel better or is it hard because you have to relive it every time you play them?
JL: It kind of comes and goes. We’ve been touring for like two months out of the summer. So just playing the songs every night has kind of become automatic. Every once in awhile though it just hits. Ouch. Like “I’m Just a Ghost” every time we play that I get really creeped out.

EA: I feel the same way about that song. Just whenever it comes on it really sets off my emotions. I know you guys went in with only like two songs, but I think most people couldn’t write these lyrics if they took months at a time to write a record as good as yours. How did you do it so fast?
JL: A lot of it was out of necessity and also if you’ve been through a certain amount of shit and you push it down for long enough it’s just kind of easy to go back and tap in to little parts of it. It just seems like any song I’m ever going to write about anything that’s happened to me it’s just already there. It’s just a matter of pulling it out. It’s kind of nice because a lot of really fucked up shit has gone down in my life so I have a lot of stuff to pull from, but on the other hand a lot of good stuff has happened too.

EA: With all the lo-fi bands around it seems like people are always trying really hard to make their music sound older, but the way this record sounds makes it sound old almost somewhat effortlessly. Can you tell me a little bit about recording and production of the record?
JL: Basically we went to our friend Brian Andrige has a studio in his basement, I’m going to plug him Magic Basement Studios, and he recorded most of the Fums stuff at my house or his house and what we did with the Sultanas. He’s done his own band and other local bands just kind of learning his craft. Every time he gets another microphone or a quarter inch real to real and we’ve always done punky stuff and we did this single for Rob’s House for the Fums on acoustic. It was the first time he did acoustic guitars and we just went in and I would write a couple of songs and we would demo it at my house. Then we would go in lay down the guitars, the percussion and my vocals. Then, Kimberly would come and do her vocals. With the flutes we were like, “Wow we should have a flute part,” and Brian’s wife plays flute and so does Kimberly so they would harmonize. It was a cool way to record because it was just all of us figuring out what to do and I mean I never played acoustic music before. Maybe that’s why it worked so well because we didn’t have any standards to set it by.

EA: I was talking to King Khan when he was in Detroit about hyping you guys on Pitchfork. He told me a story that he is supposed to be the gypsy in “Reservoir Park?”
JL: I was super duper depressed and I was trying to quit smoking. Khan and Mark are really stressful to be around. I love those guys, but they are a lot of fucking work. So they were smoking cigarettes and instead of smoking cigarettes I smoked joints. I just got really fucked up and I was on the verge of a breakdown as I was, but I was up onstage and Khan has this whole death cult obsession. He was like, “Tonight you are going to be in the death cult.” Then he just freaked me out, it didn’t really have anything to do with him I was just abused, but I had just reached my end and totally freaked out and started balling in front of all my friends. I got in the car, my wife drove me home and I probably called for just like three hours straight. Then, I woke up the next day and I felt fine [laughs].

EA: What got you to that point that you were just that depressed?

JL: Life. Just shit that I had avoided dealing with for decades and just all of the sudden I can’t avoid the shit anymore. It just kind of all came crashing down.

EA: My favorite song on the record is “Strangers.” I wish it were 10 minutes longer. I just love that song so much. Can you tell me what it’s about?

JL: Would that ruin it though?

EA: Do you think it would ruin it?

EA: It wouldn’t ruin it for me. I already think you and that song are amazing.
JL: The first verse is about my father and my stepmother. I used to have to do a lot of labor because I grew up on a farm. I was always getting in trouble and shit like that and I would always have to flip the compost pile. I would have to dig holes out in the pasture just to kind of pass the time because I was a fucked up imaginative kid and I would imagine digging graves for my parents. At this point, I feel so detached from my parents as people anyways. My mother lives in Mexico and my father lives in Washington, so I don’t ever really talk to them. So that’s that one. The second one, “You fucked me in the phone booth,” that was when I was homeless for a long time and finally I just freaked out and called my dad and I said, “I need to move back home and go to school,” and all this shit. It was really hard to leave home and just realize how shitty of a job I was doing living. The “You fucked me in a phone booth,” isn’t like someone fucking in a phone booth, I called him angry at him that he answered the phone. That put me where I was at when I wrote the song, which was not a very good place. It was like “thanks a lot thanks for nothing.”

EA: Wow man I have chills. I think you are so much more of a genius now. I thought it was about fucking a chick in a phone booth.
JL: [Laughs] Nope. Nope. Nope. The last verse is about Khan too. You actually touched upon the two songs that Khan is on. It was about that time we were hanging around and I sold him my guitar and it was just about how he is like hypocritical. “When he smiles, his teeth will shine and you can tell he’d been crying, so that smile doesn’t mean a thing.” It’s just kind of about how dangerous it is too put faith in people or trust people.

EA: Wow man. I wish you would tell me about every song on that record. What is next for you guys? Are you going to tour more or are you going to do another record?
JL: We are talking with Hardly Art about doing the next album. I’m going to be in school going to college. That’s why we are touring so much in the summer because when we come back I will be in school for nine months. We’re going to work on some more songs and in November go down the West Coast with King Khan and BBQ. 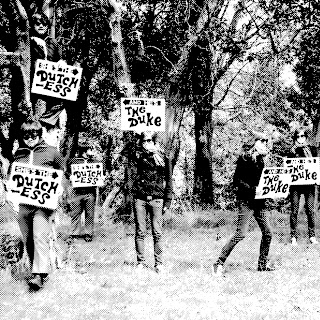 Hi Nice BLog you will realize that way to quit smoking is all about changing perspective. Quite simply, if you can learn how to see smoking the way a happy non-smoker sees it, then you can find it every easy to stop.