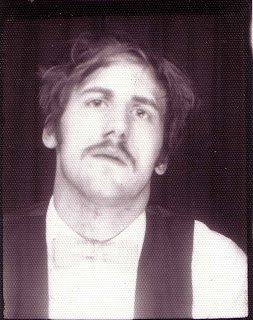 Local poet/writer and musician Richard Wohlfeil will release a collection of his works titled Explorations of a Page; it's featured as part of an intriguing celebration combining music, literature and spoken word, at Cliff Bell's on Monday evening, (9/7). This is a self-published release through Wohlfeil's Lo & Behold! Publishing company (myspace.com/loandbeholdpub). It's presented in a small handheld binding with each page baring its own distinguishing lay-out of words. "It's like an homage to the Little Review (from the 1920's) and an homage to Lawrence Ferlinghetti," said Wohlfeil. "Because his first book he published himself, [so] I figured I should do the same." Wohlfeil had completed much of Explorations years ago, but had to work to accrue the necessary finances for self-publication.

Having written most of his life, Wohlfeil said "I was interested in it as a kid, but I never decided I'd really go forward with it until a few years ago – I'd been playing music for a long time and I ended up ruining my fingers." The long-worn injury has healed lately, as Wohlfeil has started drumming regularly for the Sisters Lucas; however, while his hands were healing, he turned to writing as his main focus.

Regarding the distinct, intricate layouts of each page: "There's huge blocks of code," said Wohlfeil. "There aren't any periods in it, there's no formal punctuation." It as written as though spoken; pauses, be they natural or awkward, are represented by commas, and the inevitable breath is represented by a dash.

The doors open at 7pm and the show begins at 8pm. Poets (including Wohlfeil and the Questions' Drew Bardo and Brittany Billmeyer-Finn) will read for 10-15 minutes in between performances of bands. Then, the night is closed out by DJ collective Haute to Death (at midnight).

"Detroit's very strange in the way its constructed – there's huge cliques and the only people who are gonna go see one person(/band) are people who are involved with that clique. I tried to pull a little bit form each one. They cross over a bit, but not really. So, it's a nice diverse mix. But Haute to Death – they're going to have a dance party at the end of the night."

Performing bands include: The Sugarcoats, Gardens, Magi, Al Scheurman, Liz Star and the Sisters Lucas. (With Haute to Death at midnight.) The $7 cover includes a copy of the book.
Lo & Behold will release the fascinating works of Wohlfeil's friend Randy, a Livonia school bus driver whom Randy met a while back. "He's a really interesting guy. I'd come home from work and there'd always be an envelope on my car," with notes like "2 new poems," or "short story."

The book will also be available at: