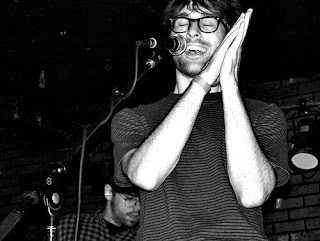 This week on Deep Cutz...we explore the intriguing intricacies of the artistic experience, particularly in the heat of creation - examined here through the anecdotal regalings of Jonathan Visger, singer, guitarist and primary writer in Ann Arbor's Mason Proper.

In nostalgic, romantic reverence for the album-as-artform, we delve deep into the mental, physical and sometimes spiritual...(or...just dreamlike) journey of writing and recording Olly Oxen Free, the cerebral, rhythm-driven daydream odyssey that is the group's 2nd full-length. (Out now on Dovecoat Records - www.dovecoterecords.com/ - with reviews here - and, from Real Detroit--here. 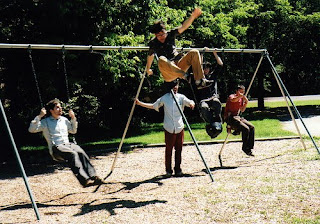 Milo / DC: Can you describe the experience of creating the album? starting from when you got back from tour back in the early parts of the year? what were you going through, what did these songs mean for you?

Jon Visger: As soon as we got back from our tour, I disappeared to my secret hideout, hermited up, and tried to write as many songs as I possibly could. I just wrote and wrote and wrote. Usually I would get 1-2 fairly developed ideas out in a day, although some days I'd have burnout, and so I'd work on mixing the solo EP I released earlier thisyear, North South Pt. I.

We met up with Chris Coady, who works on the TV on the Radio records, and with Blonde Redhead, the Yeah Yeah Yeahs, tons of people... I sort of sat back and the band went through about 30 songs that I brought, and Chris made a list too, and we looked at what the crossreferences were, and other than piping in that I thought Safe for the Time Being had to be on the album, I didn't pick the songs. I was surprised and excited with what everybody chose. I was even a little scared at some of them... Shiny was just a 30 second fragment, and Alone was a similar sort of thing. Alone was so weird, I was surprised they chose it, but I was really happy that element would beon our record, which otherwise could seem a little too smooth or something.

After that 4 day session of getting our heads on straight, we rented an empty wooden house for 30 days, which was all the time we had if we wanted to be on schedule to release it this year instead of next January. I was out there every day trying to push forward somehow, and working with whoever else from the band was available that day...I would always just crank it up and go press my face to the window and watch all the cars going by... It was on a busy street. I'd listen to the music and try to pretend it wasn't us, and looked at the people in their cars and imagined myself as one of them, listening to this music, and I'd ask myself if the music would be doing what I would wish it was doing if I were just driving somewhere.

Whenever something would pop in that pulled me out of my daydream, I'd remove it. Sometimes it would leave a hole that something else had tofill, but more often than not it was fine without it. Most of the songs sounded cool with just the drums and bass alone, so we figured there was no reason to force anything else in that didn't absolutely need to be there.

Most of the lyrics reflect the sort of dark sense of humor we developed over the past few years, but especially last year. We just had some bad luck here and there, getting stranded again and again, equipment failures at key moments. We learned to laugh at our own troubles. It got a little out of hand there for a while, and I thinkI was reveling in bad things happening, and maybe inviting some of them to happen, but that subsided eventually.


Milo: So, in that house...can you tell more of the recording experience, the set up...

JV: Well, the house was just a very small wooden house with really high ceilings on an extremely busy corner. Traffic noise was just a fact of life on this album... though usually it was really low frequencies we could just filter out.

Our recording setup was modest... I used Logic 7, and we bought an Apogee Ensemble to use for the first 14 days, then returned it, and finished up using my less-high end Presonus Firestudio. We used pretty much the same Rode microphone for everything, except the drums. Most of the keyboards were reamped through a Vox AC15. We only had one external preamp/compressor. A lot of the sampling found it's way onto Matt's reel to reel tape machine to be screwed with and muddied up before coming back to digital.

We were really adamant about keeping anything we liked from the demo versions. In particular, the vocals from "Fog," "Point A to Point B,"and "Out Dragging the River" are all the demo vocals from the first day I made them up. I figured that you never get it more right than the way you sing it the day you wrote it. You know what you mean then. After that, you kind of start imitating your memory of that day. This was an afterthought though... I didn't tell Chris this, but the vocals on Fog were me singing into the internal microphone on my laptop... He turned them up and said, "These sound really noisy and thin." I was just like, "Yeah... they are pretty noisy, huh." It is a testament to his mixing skills that he got them to sound so good. Who needs a U87? Some of the guitar on Downpour is recorded through my laptop mic too, right when Brian made the part up in Zac's living room. You can hear the original drum loop I used for Point A to Point B coming through when the vocal harmonies come in. They phase and get weird, but I like it. 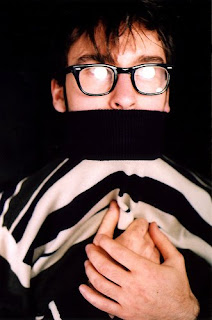 
Milo: How long have you been playing...and detail your experience in recording?

JV: Music has been my main hobby for a good 8 years or so. It's about the same for everybody in the band. We all sort of played together, or in different bands, in high school. I quick college after one semester to go to recording school at the Recording Institute of Detroit. I went through the whole program, all the classes, and all that was left was to get an internship at a recording studio. I never did that, because I didn't want to work at a studio. I just wanted the knowledge. Now I sort of wish I had. If anybody from the RID is reading this, you should give me an honorary certificate. I've recorded tons of stuff! GIMMIE THAT CERTIFICATE!

Zac's got a lot of recording experience too, doing his own stuff and his previous bands, and Matt has his own weird sound collage production style he brings to the party. I'm hoping to get more into recording and producing things for other people.

Milo: Words I often find others (and myself) using to describe your songs are:> restrained, dark, pensive...heavy... what is song creation like for you and what pushes you to create music?

JV: Song creation is just about the greatest thing in the world. I like it a lot more than performing. There are just so many elements at play, affecting different parts of people. The beat affects your body, the lyrics affect your conscious brain, the melodies and arrangement work with your emotions and your subconscious. It's unbelievably rewarding to try to figure out how to balance those things. So much of it is instinct. It's always hard for me to continually trust my instinct. You start out on instinct, then youget some bright idea, and you THINK it's all great, but your instinctis telling you it's wrong, but you don't want to admit that this idea that you love so much doesn't actually work and is messing everythingup.

It's very painful to kill that idea eventually and not look back, but at the end of the day you are always SO happy it's gone.

I think it's really painful and hard to make music, and art in general, when you're putting it out there for everybody to kick around. It's because it's a difficult thing that it ends up being so rewarding. People put things out there that they really love, and sometimes everybody hates it. Sometimes they hate it for what seems like the wrong reasons. If you change, somebody will hate it. If you stay the same, somebody will hate that. Somebody else will love you for both of those things. But nobody owes anything to an artist they don't like. Just because you worked hard on something, does not mean you are automatically entitled to anyone's respect. The harder you try to make something really good, the more it's going to hurt when somebody thinks it's no good. However, at least they thought aboutit. At least you communicated something out to the global culture, and it communicated back. It beats just hiding under your bed and hoping nobody finds you.

It's a cliche, but in the end, most things worth doing are hard. Making this album was hard. Surviving as a band, holding it together, is hard. But those are the two things I am most proud of in my life so far.

or, more Mason Proper in this week's issue of Real Detroit Weekly--or here
Posted by jeff milo at 12:01 PM

dearest jeff.. so i know u wrote this tons of years ago but wow this is a great article i absolutely loooooove Mason Proper as well as Mr.Visgers rigourous and wonderful mind and sounds thanks <3 -steph