A belated recounting of the DIY STREET FAIR…as I was slowly working on some grandiose reflection on the whole summer’s worth of events, concerts, gatherings and great local music…but the rest of that may be for another day…

Meanwhile, looking back to September 20th and 21st…on Troy St. in Ferndale…

In any direction I looked I saw a smile – and anyone I talked to couldn’t help but remark on how groovy this thing was…how well it was going…the ideal set up, the ideal location, the great line up of bands…the great performances…the great art…the great beer….it was all just great.

“Or, to put it in your words,” my friend Tom offered, patting me on the shoulder at the edge of the stage as Deastro set up for the final set of the weekend, “…glorious.” 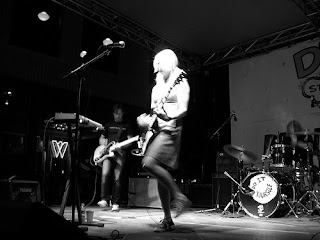 Yeah, it was – thanks greatly to Carey Gustafson and Chris Johnston, and the dedicated board who worked their asses off over the summer to organize this inaugural event. As each person I ran into continued their marvels at the smoothness of the fair, the flow of the band performances and the encouraging turn out, I continued to tell them – “just wait till next year!” And the year after that…as hopefully this year’s FERNDALE DIY STREET FAIR was only the first in what hopefully becomes a grand tradition.

Ferndale’s own signature celebration of art, music and camaraderie. And it is worth noting how great of a summer we really have had – thus that this solstice-set celebration closed it out with an appropriate amount of reflection, reverence and promise…

It was a block party really, for many of the Detroit regulars who call Ferndale home – like The Nice Device, Electric Fire Babies, Dutch Pink and the Hard Lessons – and for some eastsiders (the Muggs) and westsiders (the Pop Project) and in-between (Deastro, the High Strung.) 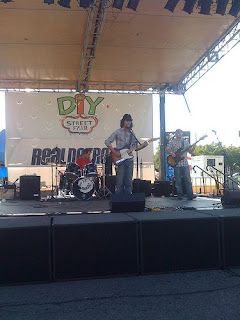 The Pop Project, the High Strung and the Nice Device brought their usual dependable live-vigor and dashing on-stage personality to the street, while the Muggs and Hard Lessons brought their characteristic passion in visceral rock-glorifying exhilaration. The Electric Fire Babies, having rapped a bit with WDET’s Craig Fahle on Detroit Today before the show, brought what some referred to as the most flavorful set, the most distinct sounding (funk/booty/rap-hybrid) with a comparably dynamic live-presence. Deastro, as he always does, showcased his pop propensity and his band’s indomitable spirit. Esquire shook up the suburbs with his sultry raps, Silverghost debuted some spectacular new-wave leaning material and Charlie Slick performed one of the best sets of his dance-ballad-belting-glitter-splattered-career…as he was the headliner for night one.

But, most importantly, kudos to the city of Ferndale for supporting DIY STREET FAIR—and many kudos to all the volunteers and artists who helped put it on.

See you all next year...

Nice Device photo by
http://www.flickr.com/photos/notramstolimestreet/
no trams to lime street