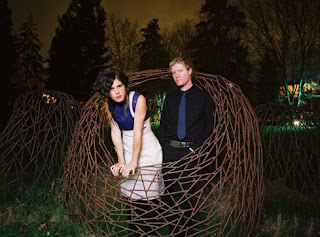 It's that strange huff of the first breath out the front door, in the morning when your body still feels alien to you; gazing off toward the still yet foggy horizon and having the tips of your canvas covered feet swathed in dew. It's the reverence for the sunset-fleeting clouds against the ever growing obfuscation of the oncoming glow of the urban centers light pollution. It is stark and it is driving and it is wordless. It shimmers with electronic percolation at its frayed edges and grins with an earnest banjo at its crust, with its emotive eyes burning with a ghostly viola saw and its steady heart pounding with intricate, experimental percussion.

The band started in 2002, out of O’Connors mostly-solo recording experimentations, (though Molinaro still contributed.) The debut, Mutiny Sunshine, was recorded at Miracle Lake Studios and O’Connors own studio, talknumeric and released in 2004. That summer, after playing a few shows together, Molinaro officially joined. It was a sweet storm of synths and loops darkly flitting around visceral live drums, pounding in a gritty hollow beat and cymbal crashes. Having gotten the world’s attention with their proclaimed ‘folktronic-hop,’ there was a new act on the vanguard of mesmerizing instrumental orchestral/electronic-pop – providing the proper fanfare for the even more palatable, taut dissertations of the fully-Molinaro-collaborated affair of 06’s Beat Romantic (Arena Rock Recordings.)

After touring much touring through 2006 and 2007 with bands like The Walkmen, The National, (the equally-quirky synth-led duo-)-Quasi and Clap Your Hands Say Yeah – the duo returned to Portland and holed up through the winter of 2008, working on their third release, Eyes At Half Mast – (which comes out Sept. 16th, on One Little Indian in the UK and Arena Rock here.)

Like their past two works – it is more of a movement then a chaptered album. Each song is a mix of subtlety and therapeutic explosiveness – the entrancing viola trembles and quivers over the thick brush of warm synth churns, sometimes with an angelic air, but other times with a more pensive, haunting reflection. The drums are as prevailing as ever, with its ever-roiling rumble feeling like the comforting (if erratic) rhythm of our voiceless narrators soft booming guidance. Songs shunt and sway powerfully but often vaporize before your ears…shocking you out of your dreamy state as you squint your eyes into that same foggy horizon…thinking… 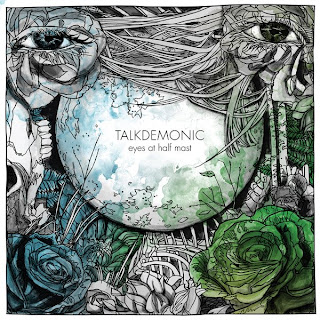 Milo / DC: ~how has your year been going?--any particularly memorable events, through finishing the record, to the two west coast tours?

Kevin O'Connor: Our year has been really good. We basically finished up the tracking of the record in nov/dec 07 and then I spent a few months mixing the record meticulously making sure it was all there and testing out a bunch of track orders. I think in any endeavour, there's a great amount of satisfaction when you complete something. Finishing the record was a very bittersweet end for me personally, in that it basically wrapped up about two years of work and musical output. Once it was done, it was kinda sad in that I had so much fun mixing and working on it. The last 5 months of recording and mixing were done in this awesome house in Lake Oswego, big and empty with lots of interesting sounding rooms. The control room was in the master bedroom. Lisa and I holed up slumber party styler for a week working on her string tracks. That was a really fun process...


Milo: How long have you been playing and how did you start in music?


KO: I kinda came to music a little later than most, not actually picking up a guitar until high school and then tinkering around on my friends drum set around senior year. In college I played in a ton of bands out on the palouse at Washington State. Its a long rap sheet of bands and differing roles instrumentally. My musical influences were rooted in my years of running a college radio station and then a post-college interest in instrumental hip hop and the peak of electronic music of around 2001/2002. Thats atleast when I think it peaked. Whereas I'm all self taught, Lisa is classically trained and has been playing the viola for a long time. Her influences are closer to composers and classical music in general, which makes for a nice balance of influences.

Milo: What drew you to instrumental music...reviewers have, sometimes quite effectively, written of the enhanced power for expression when it isn't limited to the confines of a specifically worded lyric...have you developed your own (similar?) philosophies for instrumental music?

KO: I definitely think so. We try to approach instrumental music in a pop sort of way, opting for very short songs that pack a punch of emotional umph rather than jam out endlessly and tirelessly like a lot of instrumental bands do. I'd so most music journalists write about the limitations of instrumental music, but we try to focus on serving up a bevvy of melodies and sounds to cancel out the need for lyrics. I think it can make our records even more personal for the listener, in that they can allow the music to soundtrack their lives. If their were vocals, their would be a lot less room for all the swirling instruments and quick changes. People have been telling me for years that instrumental music has a glass ceiling, more like a metal ceiling, but I never have thought about it that way and don't really care to be honest. You make your music honestly, and hopefully someone likes it.

Milo: …and, can that connect to the way your some of your songs are constructed, in terms of their brevity, or the way they sometimes fade or trail off…

KO: I think the shortness and brevity of our songs lends strongly to the concept of the album. Best listened to all together in order as a piece, combing the classical compositional elements of the past with the pop moments of now. In an mp3 world, we probably suffer a bit, since the album as a format continues to be slighted. But again, if you believe in what you're doing and see it as a whole piece, then those 2 minute songs are just part of the 38 minute overture. I like the songs to not exhaust the more beautiful parts, in that like life, they only last a short time.

Milo: ...Any other artistic pursuits? given the album and songtitles, which are rapt with imagery ("a hundred faces in the neon forest" is a dreamy hallucination onto itself) would writing/poetry be one? --(-- does the album's title hold specific meaning?)

KO: The album title refers to the overwhelming grief I felt losing my dad in early 2006. The overall mood of the album can be attributed to that tough time, the hardest year of my life. I wrote many of the core songs on the record during that dark time, so its a very emotional listen for me. Some of the songs are really hard to play as well. Lisa was amazing in that she was able to capture this mood with her viola, especially on the outro on "Dream by Heart". I remember sitting at the board just sobbing after we pulled up her layers of viola over my wurlitzer lines, bass, and drums, and it just completed the overall feeling of the song. Thats where we really connect. 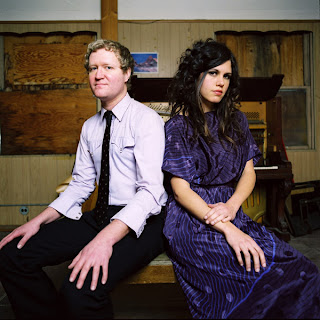 Milo: For the recording process for 'Eyes,' did your approach toward writing or recording change, did you push yourselves in any specificdirection?

KO: The process was similar and different from the last two records. I've improved my studio drastically in the past two years in the hopes of making this new record sound better than the first two. My number one priority was being able to mix the entire record myself. Most of the record was recorded at Talknumeric in Portland and Lake Oswego. We did have the help of Skyler Norwood over at Miracle Lake for 6 songs worth of drums, and one song was recorded in Alberta Canada with our friend Jon Cohrs.

As far as pushing ourselves in a new direction, we wanted to make a record that better reflected our live show, something was a little louder and more intense than the first two recods. Hopefully we've succeeded in doing so...


Milo: How does this album [Eyes at Half Mast] distinguish itself, to you...from past works - and are there songs on here that stand out to you, be it for their structure, melody, poignancy or just the unique experience of writing/ recording?

KO: I think its our most mature record to date in cohesiveness, fidelity and overall song mood. It also has a bunch of different types of songs, which lends well to a varied listen. The songs have an urgency and depth of emotional content that really makes it even more intense than "Beat Romantic". Its a lot less electronic, has a ton more drums than the last record, lots of stereo drumsets and more air organ type keyboards and analog synths.


Milo: future plans? touring? will you make it over to the east coast? and anything else your looking forward to?

KO: We're playing our album release show on Sept 20th and then hitting the road for 5 weeks of touring around the US on Sept 30th, including the east coast, midwest, south and west coast. We can't wait to get out there again and share play this new record for people...

I found this site using [url=http://google.com]google.com[/url] And i want to thank you for your work. You have done really very good site. Great work, great site! Thank you!