at Troy St. and Woodward - between the W.A.B. and Emory

Ferndale is blossoming with an accumulation of basement-born artists. The suburban city is truly glowing with the regulars of Detroit's art and music scene, like an array of torches placed along an ocean shore – we may get our ya-ya's out shoving off southward from 8-Mile down, but this town is where many of us call home. It's high time we had a festival of our own, done by ourselves.

Chris Johnston knows that local businesses always have an uphill battle – he works on the board of directors for the Ferndale Downtown Development Authority and owns/co-manages The Woodward Avenue Brewery and The Emory, at Troy and Woodward. He knows there's got to be more ways to attract people to the broader downtown area, beyond the main drag of 9-mile. He knows his customers appreciate not just laid back ambience, but frugality as well (not all of us can afford $90 stain glass parrots at festivals). He, and his collaborator Carey Gustafson know that you can throw a rock down any street in Ferndale and most likely end up hitting a musician's house.

"I've lived in Ferndale for 11 years, I really love this city and I felt like there was something missing like an event that was really about the people," said Johnston. "I'm really big on the idea of over-delivering. I want to include as many people as possible."

On September 20th-21st, the southeast quarter of Woodward—9 Mile will host the DIY Street Fair, nestled on Troy Street between the W.A.B. and the Emory and extending back into the W.A.B. and Ferndale Public Library parking lots. This free event features the unique, homegrown DIY ("Do-It-Yourself") efforts of local artists, crafters, local/national business, musicians, restaurants and breweries.

"We're appealing to people that have local businesses who are trying to supplement their incomes, people who love garage sales," Gustafson said, explaining the more casual atmosphere.

"If you're just trying to get your [art/music] out there – we get you!"

Organizing began in January, with Johnston and Gustafson joining a team of volunteer planners. It has grown into a commendable, full-fledged festival with 105 booths for local artists presenting their wholesome, modestly-priced, assembled-between-day-jobs-in-the-suburb-basements artwork.

Behind the W.A.B. will be the Beer Garden, where attendees can purchase beverages from 12 Michigan-based breweries and find food from 6 local restaurants. The main stage (between the W.A.B. and Emory) will feature 36 bands (through both days) including local indie/neo-folk/blues/rock/country/electro/dance – all across the board: - Silverghost, American Mars, The High Strung, The Electric Fire Babies, The Nice Device, The Hard Lessons, Dutch Pink, Scarlet Oaks, The Pop Project, Charlie Slick, Woodman, Bluesong, The Displays, Paul Green's School of Rock (performing Rolling Stones songs) and many more – including after-parties both nights at Club Barts restaurant. "All the most important bands [historically] started off DIY," said Johnston. 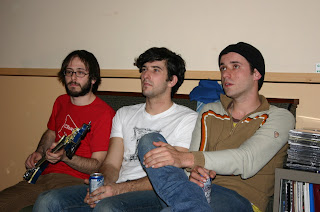 There will also be a beer-free, kid-friendly area with its own stage featuring family-friendly performers and hands-on DIY-craft-activities.

The event coincides with The Funky Ferndale Art Fair (based on 9-Mile west of Woodward) but caters to the more thrifty demographic who prefers the more rough-hewn aesthetic. "Why not throw a huge party celebrating that way of life?" said Gustafson (who makes/sells art through her craft outlet, Glass Action and plays drums in local indie-pop trio Serenity Court).

"You can do a lot of green elements too," said Johnston, with businesses showcasing eco-friendly products, while showcased independent restaurants and brewers proudly support local growers. You can refill water bottles at stations or purchase recyclable cups.

The Bands (on Ferndale) 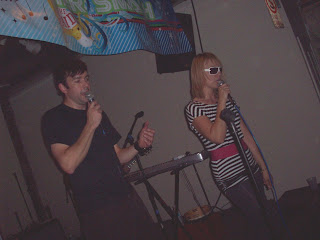 "We live in Ferndale and love the accessibility to downtown," said singer/keyboardist Deleano Acevedo, of electro/art-rock/pop duo Silverghost, who've been toured out west recently and will be returning to the studio soon. His singing-counterpart, guitarist Marcie Bolan added, "The city needs a festival that focuses on the local music scene that normally people would only see in Detroit."

"The potential for a music festival in Ferndale is limitless," said Dave Feeny, who performs with American Mars. Feeny opened Ferndale-based Tempermill Studios in 1989. "I've always thought this was the place to be and over the years we've done many hundreds of indie records, so I think it's the epicenter of the Detroit art and music scene."
American Mars is currently planning more dates in support of their recently-released and highly acclaimed Western Sides album. And, also considering taking some ballroom dancing lessons. Why not?

Derek Berk, charismatic drummer for the consummate power-pop/rock trio The High Strung, weighed in on Ferndale: "It's ready to blow up all over the place. We dig it the most. The People are what make Ferndale awesome. You're most creative friends live here – if we can get them all hanging out together and exchanging ideas there is no limit to what could happen, creatively and spiritually."

The High Strung just finished their fourth annual public library tour. This fall, they tour with Bob Pollard (from Guided By Voices). They'll have a new album, Ode To The Inverse Of The Dude, ready next February.

Ferndale-based indie-dance-rap-funk trio Electric Fire Babies have had a great year, playing with the Gore Gore Girls and at Detroit Summer Smash. "Ferndale is a great place to live," said EFB co-singer/guitarist/sampler-man Lo-Fi Bri. "I'm discovering more and more musicians gravitating there every day. There's three recording studios and a large practice space within blocks of my house…" home to EFB, and other Ferndalians Friendly Foes and Wildcatting. "I literally can borrow eggs, butter, amplifiers, fuzz pedals & record within a block from my house," said Lo-Fi, "that's not too shabby."

"The DIY-theme seemed to be free flowing," Johnston concluded, "where, this event could look like one thing one year and grow…"