Mick Bassett and the Marthas - Part One - by Thomas Matich

[ Mick Bassett & The Marthas, a quintet of young, versatile multi-instrumentalists, have been steadily accelerating, in strength, in chemistry, and continuing to build their loose, energetic live shows (in frequency and distinction) throughout 2008. To celebrate this talented local collective on the vanguard of a strange and bewitching fiery-folk...we here at Deep Cutz provide a fine bio/feature by Thomas Matich - that had fallen through the cracks at Real Detroit. It was originally written in late April of this year and still stands strong enough on its own... --milo] 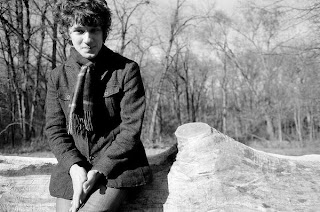 Get Past The Past

Before I even heard Mick Bassett sing, I was told he sounded like Bob Dylan. In a way, it’s not fair that Bassett be compared to a legend like Dylan. How could he possibly stack up? But one spin of his five song EP released earlier this year, Here Comes The Whirlwind, does two things: his vocals recall Dylan, but with a sincere, older than his years mold that crushes the cutesy cracklings of Conor Oberst and with just five songs, Bassett hooks you in to the point where you want to hear more and see where this former Dollface (his high school band), yet still a baby face (as is his band, The Marthas) is going next.

“I just don’t understand the Dylan thing,” says bassist Jessie Shepherd-Bates when I bring up the comparison to Bassett. “But if you actually listen to it, like I don’t think Dylan would do… but everybody sounds like everybody to some extent. I don’t see how you can’t get over that.”

“But they could say they sound like Creed,” guitarist Gordon Smith jokingly offers.

Bassett quietly sits on a couch in the Blue Note café in in between Bates and Smith, his floppy, twirling mop of hair slighting shielding his face. I’ve been a big fan of the Whirlwind EP since one of my cousins put me onto Bassett and I feel sort of like a jackass talking about Dylan because Bassett is a genuine talent standing out with some of the best up and coming musicians in the area, but it’s just one of those things that needs to be touched on.

“Or he’s got this Lou Bega thing going on,” Bassett adds to the gag. “But, no… I mean once we get some more music out there, it will kinda fade away. Dylan was a unique personality so that’s why it’s like easier to fall into that trap. The thing is I sound more like Bob Dylan than most people, my voice is more chalky but I don’t think you’d ever mistake me for Bob Dylan.”

20-year-old Grosse Point native Bassett plays in a Catholic Church band with Smith and works at a Borders (as does Bates) in Ann Arbor, but he’s thinking about relocating to Detroit, although A2 does have more courteous homeless people, he adds.

“I played chess with one of them last week,” Bassett says. “He killed me. It was awesome. He said he was a chess master.” 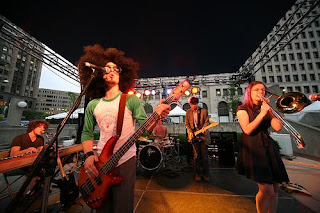 Their drummer, Erik Roosen, who the Marthas joke as being 12-years-old, is even quieter than Bassett and it isn’t until our impromptu “photo shoot” in the men’s room that he gets a bit chatty, offering up bottles of LaBlatt Blue he pulls from his bag. [The band is rounded out by Allison Young, on trombone/guitar. Back in mid-Spring, the Lager House was still experimenting with their free show idea as the Marthas prepared for a show there...Hence, Tom suggested...] the band should encourage the audience to drink more so they’ll make more cash from the Lager’s policy of giving bands a percentage of the bar tab.

“We should have a contest,” Smith blurts, “who can drink Mick Bassett & The Marthas under the table?”

Bassett is itching to record new material because he feels he’s blown way past the Whirlwind EP. But, he says his material will always be a step behind his current state of mind and the live show captures him at the moment. He thinks that’s how it works for many musicians - fans judging work that the artist has already moved past.

“It’s almost inspiring for me to feel like I constantly need to be putting music out to catch up with myself. I don’t know too many artists that go ‘This is the best I could ever do and I’m done.’ I can’t ever really imagine running out of ideas..."

info at: http://www.myspace.com/mickbassett
Posted by jeff milo at 8:35 AM