What started as a memorial celebration has now become somewhat of a tribute-to-itself. The collective of local musicians sprouting variant muses under the Loco Gnosis record label collaborated four years ago to put on the Blue Moon in June festival – a coalescing of reverent nods, to the lineage of Detroit music, the works of its 60s counterculture activism, to the city’s general air of oil-splattered concrete crumbled urban psychedelia, and to the then-40th-anniversary mark of the Trans-Love Energies (MC5/White Panther commune’s) Belle Isle Love-In flower-child gathering...
(photo: Ella Kulick) 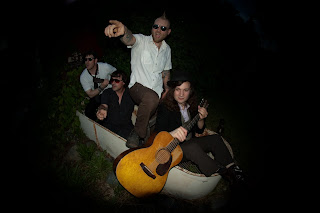 This year's line up was curated by Ray Thompson of Oscillating Fan Club and Pigeon. "After four years, I believe that we can finally call the Blue Moon In June- an 'institution,'" Thompson said. "It's becoming easier to put together with more bands inquiring to play as opposed to me begging friends' bands to play or even attend. I have to thank Jeff Howitt who has stuck with me throughout the years and especially this one-- as I'd been away on holiday (a couple weeks) in Spain/Italy and did not have the luxury of fast communication. After initially setting it up, I have relied wholly on Jeff to tie up all the loose ends." 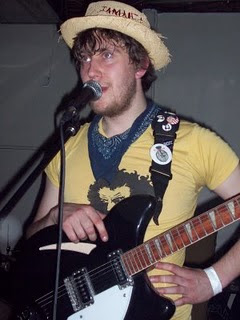 Thompson (pictured) said, "I'm very excited for this year with a whole new lineup with new bands like Olay Ray and returning, rejuvenated bands like The Questions, look out!

There was legitimately a "blue" lunar visual that inaugural night back in 2007 (and if the Internet is to be believed, we apparently could see one at the end of March, this year) – but regardless, the festival has returned to the Contemporary Art Institute of Detroit each summer, often around the peak of its bubbly, lava-blast humidity of gasped breaths, sweat-speckled brows, swarming bugs and visual undulating heatwaves – either the end of June or beginning of July.
This year’s trounce marks its fourth year, seeing a slew of offshoot-bands that have morphed out of previous groups from previous year’s line-ups, as well as the quasi-return of perennial poetic psyche-blues band the Questions and the still sturdy upswings of many others like The Electric Lions, Blasé Splee and Satin Peaches. And, as they say, many more.
This year, (like “year 3”) there will be two nights of music: Friday (6/18) features the new rejuvenated and newly-recorded raw beauty of The Questions. along with Hi-Speed Dubbing (lead by singer/guitarist Justin Walker, a persisting “side-man” from previous groups like Siddhartha and contemporaries Electric Fire Babies and Isles of E.S.P.), and The Satin Peaches (whose newest (re-)-addition, guitarist Jesse Shepherd-Bates came from a long stint with Mick Bassett’s Marthas). Also Friday – the always spectacular and splattering Marco Polio & the New Vaccines, the charming rootin-tootin psyche-pop soiree Blasé Splee, the head-swimming transcendent tones and drones of Electric Lions and
Saturday (6/19) will be lead by the soulful sweat and post-punk fervor of Black Lodge along with the bendy surf-flared psyche-surge of Devilfish (which features guitarist Pierce Reynolds from The Oscillating Fan Club). F’ke Blood is lead by stalwart underground artist/musician Dion D. Fischer (co-founder of UFO Factory and affiliate of various sense-stretching projects like Princess Dragonmom, the Wolfmanband, Invisible People and many more), but features the singing/guitar talents of Steven F. Darson, paired with a rhythm section otherwise recognized as the Silverghost duo, Marcie Bolan and Deleano Acevedo. Earlier Saturday evening you taste the delicious 60’s raucous rock meets 90’s american-underground via Ypsilanti’s own Jehova’s Witness Protection Program (who, by the way, will be celebrating the Loco Gnosis release of 3-song single that weekend). Ola Ray is also on that night’s bill. 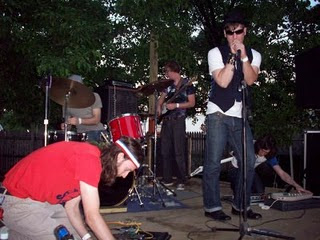 With more than a dozen bands to document, DC reached a handful to get some updates:
The Questions have welcomed James “Pookie” Grech into their fold, having the bassist now swing double duty between them and another Blue Moon contributor, the Electric Lions. The Questions started as a three piece a handful of years ago- with Drew Bardo (pictured above with Wildcatting), Will Linna and bassist Matt Kleinhenn (currently of the Rue Moor Counts). “At the time of our going separate ways,” Bardo said of the Kleinhenn collaboration, the music felt a bit too predictable and “affected too heavily by the desires of the night life—if you know what I mean.”
When the band became a two piece around the mid-00’s and through 2007, “things accelerated into a very organic and primordial state. We consciously decided to make the project very improvisational and raw. It dipped into the philosophical attitudes of people like Vonnegut and Kerouac, well, the majority of the beat scene for that matter, that art and music only thrives in the current moments’ energy and thoughts...that it should be created and then left alone to float into space, never to be developed any further.”
In this period, the duo, with their raw energetic performances, focused on humanitarian efforts through fundraising shows and connecting deeper with the nonprofit and counterculture populace of Detroit. They also connected with myriad musicians from around town, feeling like “the community essence of our songs were creating a nice cosmic spider web.”
To avoid any stifling or stagnation, they started bringing people in to help evolve their musical landscape for future recording, particularly more instrumentation, via the bass (or second guitar). One year and more than two dozen experimental auditions lead to Jessica Sacks, who brought a music degree from U-M and traveled frequently in the Jazz circuit, “and a complete sweetheart, as well,” Bardo added, “a fabulous musician.” Sacks helped develop “a more mature sound” from the “junkyard stomp of the two-piece. We got some academia and she got some Rock ‘n’ Roll, it was mutually rewarding.”
Next, they added multi-instrumentalist Chris Krez, who grew up in Europe actually, traveling with his Opera singing father and learned music at a very young age. Though a six-stringer for the Questions, he started out on jazz trumpet. “He brought a whole new energy and added fresh idea’s immediately,” Bardo said, considering him a “perfect counterpart.”

Schedules conflicted and stylistic growth diverted somewhat, leading to Sacks’ amicable departure. After Bardo (and “Pookie”) and the players from the Electric Lions finished a stint as WONDERLAND-musical house band the Glass Orphans, “we decided,” Bardo said, “to kick start the Questions back up from a nice long vacation by recording 13-songs in the studio. Pookie and I hit it off very naturally. He is a brilliant bassist and a super cool cat. He started rehearsing with us and it came together instantly. It’s still early but it feels like he’s been in the band forever.”

Up next – The Questions have a 4-part album, likely titled “Directions.” They’ll release 4 Eps called North; South; East; West, over the next 6 months leading up to a double-vinyl full-length of all the songs on one album.

A year or so off doesn’t necessarily make this a comeback – though, Bardo said, in that time, not only did he and Rabeah Ltief collaborate for the Glass Orphans album, but he finished up a book he’s planning for a summer release on Richie Wohlfiel’s Lo & Behold publishing label. “I started out as a performance poet and aspiring writer (from here) so finally publishing one of my many manuscripts is long overdue and exciting.”

Bardo described the now-4-part collaboration as a “coming out of the chrysalis thing,” still “founded on sincerity and pain,” but “not quite as sporadic and improve based sloop down from the junkyard howling hour.” When pushed to conjure a few moods and sensibilities surging through their new stuff, the tract included “classic rock 1967-1980, including the great 70’s punk movement and early 90’s Seattle…” even to “that kind of DC skate scene shit of the 80’s—Minor Threat, Black Flaggish Fugazi kind of songs.”

He assures that Pookie’s transition was quite swift, and also really natural. “A wonderful musician and a fun personality,” Bardo said. “We feel like we’re just getting started really; this isn’t the same band it was two years ago at all, just as it wasn’t the same then as it was five years ago.”

“If you never seek change, you grow stale and old spirited. I don’t force change but I don’t resist it either, like a tree that bends in the breeze.” Referencing their digging through what might be considered “classical” styles (even the Black Flaggish stuff,) Bardo quips, “it’s safe to say we still haven’t started writing songs on a computer yet. But who the hell knows what we’ll feel like doing next. Rest assured, it’ll be whatever the fuck we feel like doing. –Do what the hell you wanna do—just don’t harm that which surrounds you. (Unless, you’re surrounded by a pack of raging Pitbulls).”

Bardo said the time off proved beneficial to the Questions’ creative process. “The musical landscape has grown into a place where we can now truly write and perform anything we want to, without limitation or growing pains. We are fully surrounded by vibrations from the heartbeat of our planet and it still makes sense to share these strange translations with one another.”

“I don’t feel any pressure to achieve fame or fortune – in fact, i feel a polarity between our ethos and the pursuit of such trivial and material things. We began this project on a different type of sailing vessel! It has and always will be about the vision quest.

...as long as humanity is asking questions about our mysterious experience in this upside down dimension, we will have a reason to throw color onthe canvas.”