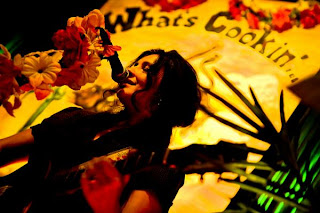 Superb country-blues pop songstress, Holly Golightly, cut her teeth in the realm of gritty guitars with Billy Childish back in the 90's. Detroit-centrics might recall her voice warming the milieu of "It's True That We Love One Another," a track from our town's deified blues-rock pair, the White Stripes. But I found all this out, personally, after I wound up spinning this year's Medicine County three times in a day. This latest release, in a line of 18, has subtly earned a top spot in my rotation. It's playful, theatrical, charming, boy-girl vocals croon and growl; and it's coated with soot and exhaust, as strident sore-throat guitars grumble their way along a chugging foundation spilling into stringy melody-twisting punk-tinged shreds. Pedal steel and organs give it that southern Appalachian scruffiness and their bluesy-warbled yarn like vocals cover each corner of the cottonfield, from cutesy two-step dancing and hat doffed southern charm to more macabre midnight ghost story affairs.

Paired with Illy Mack - at the Majestic Cafe.