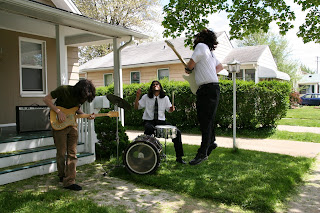 Photos: Megan Lang
“You must have been thinking about freedom…” guitarist Anthony Anonymous sings in his mid-range boom over a darkly explosive, hard-chugging pedal pushed rocker, and it rings true for the inspirations that led to him starting Jehovah’s Witness Protection Program with his longtime collaborative partner, drummer Jehan Dough.

The Ypsilanti-based duo has known each other for more than ten years, having played together in other bands on and off throughout, including other rock outfits like Propeller and Clouds. They often ended up playing alone together sporadically, just demos in basements or casual jamming, with just guitar and drums.

“We realized that we were having more fun and enjoying more freedom as a two piece than we were in actual ‘bands.’” 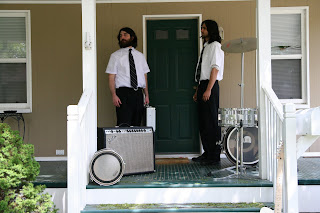 In late 06, they opened at YpsiFest IV for their first official show as JWPP. Less than one year later (regardless that they’d developed radical plans early on of “no budget,” no label and no falling into cliques) they found themselves powerless to resist the quirky charms of the Loco Gnosis label – as they were approached by them after a Corktown show. They soon started recording with Scotty Iulianelli from Wildcatting. The fruition was a glorious fuzzified fireball of golden shimmering high neck solos over trashy riffs and hard-hitting rhythms, in the spirit of Mudhoney, Dinosaur Jr. or maybe Minutemen with more of a 70’s album-rock indulgence.
Vigorous, and heartfelt, the JWPP continue to spread the love through rock n roll Aug 11, at Corktown Tavern; with their debut EP, Knockin. Check out: myspace.com/jehovahswitnessprotectionprogram.

Included here is some of the un-cut interview with Anthony Anonymous
DC/Milo: You’d played together in Propeller and Clouds, and through ’05 as a 3-piece, Rome for a Day, so, how and when did JWPP official “start” as a band?
AA/JWPP: During the course of being in these bands over the previous 10 years, Jehan and I would occasionally get together and play as a two piece. The more we played as a two piece, the more we realized that we were having more fun and enjoying more freedom as a two piece than we were in the actual "bands" we were playing in... so we booked a set as the opener for the second night of YpsiFest IV in December 2006 as Jehovah's Witness Protection Program. I came up with the name as a joke because we needed something to be listed as, and as I was thinking of a name I saw a Watchtower magazine sitting on the porch of the house where we practice. I never intended to keep the name, but it just stuck.
After our previous bands, we were pretty burned out on the whole idea of being a band in the traditional sense... we didn't have any money to invest for recording, and we didn't even think we had a desire to record or do anything more than just play once in a while. We had this concept that we would do everything "no budget"... and that we would record via 4 track and just give all of our music away. And we vowed not to play more than a show or two each month and we didn't want to try to join any groups or labels at all. Basically, we didn't want to be dragged down by the "responsibilities" of being in a band... setting up shows, getting merch, putting out a record, etc... we really just wanted to rock.
In the fall of 2007 we started talking to Scotty Wild about recording a demo with him in the new studio he built at his parent's house (I came to know Scotty through Brandon Moss, who was originally in Bear Vs Shark which was a band that Rome for a Day played with pretty often). We knew we liked Scotty and especially liked his approach to music... so we were really excited to see what he could do with us. After recording the demo, we played a show on Thanksgiving Eve at Corktown with Duende! and Speedy Greasy... and apparently Scotty had told Loco Jeff that the recording was pretty good. That night I hinted to Jeff that we had recorded some songs and we wanted to record more but we didn't know what to do with it and we didn't have any money... and shortly after that, Jeff extended the invitation to become part of the Loco Gnosis family....after meeting the people associated with LG, we knew that we had found the right people to join forces with... and we REALLY wanted to record more with Scotty at this point. just a lot of great people with a lot of great ideas and artistic expression flowing freely... couldn't have dreamed of a better gang to align with. 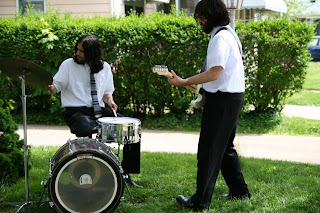 DC: Where would you chart your influences? “Straight ahead rock n roll” type stuff? Early 90’s grungy? Metal-ish even?

AA: I was raised on rock and roll... from David Bowie, The Who, The Beatles and The Cars to Zeppelin, Sabbath and KISS I was totally into 70s rock and roll as a kid. and in the early 80s, as a pre-teen I got really deep into punk rock... I swallowed up everything I could that even slightly resembled punk rock and spent my weekend nights wearing combat boots in the summer and hanging out at all ages joints like the alley door in Ann Arbor... and i soon found out that i related much more to the kind of grass roots punk rock that was spreading throughout the midwest than i related to the "fashion punk" that i saw in big cities like NYC and London.

Jehan is a few years younger than me, but he was still really knowledgeable about 70s rock and a lot of the punk rock bands that i was into such as Negative Approach, Rites of Spring, Minutemen, The Replacements and stuff like that. that being said, we would be lying if we said that we weren't strongly influenced by the wave of rock and roll that was known as Grunge in the 90s. and also by the indie-rock/post-punk/math rock bands of the 90s as well (Propeller was known to many as being a "math rock" band as well).so i could say that we both love 70s rock, 80s punk and 90s indie rock/grunge bands... but the truth of the matter is that we are probably influenced by every note of music we ever heard and digested. And, when it comes to writing music, we absolutely don't attempt to make songs that are aligned with any specific genre or scene... we just like to play rock and roll together... and so we try to come up with simple melodies that evoke some strong energy and give us room to play around with as we compose them in hopes of ultimately crafting a song that is as or more fun for us to play than it is for others to hear. sure, we want people to enjoy the music... but only if we enjoy playing it too.
Cuz seriously, for the first time in over 10 years, it really is finally ALL ABOUT having a good time making music together and sharing that joy with anyone who wants a slice. mostly though... if there is anything i want people to hear in our music, it is the genuine love we have for each other, rock and roll and mankind in general. cause as hippie dippie as that sounds... it is true. And we want people to feel a little bit of love whenever they see JWPP play. 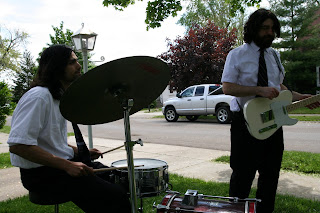 DC: ...future plans for now, or what you might be working on next?
AA: Now that [EP 'Knockin'] is out (available at our shows and soon by download on the LGP site), we are trying to finish up a video that we shot for the song “Too Kool To Care...: and working on some new songs as well. the video should be ready within the next week or so... recording with scotty was a dream come true (and that's saying a lot considering that we have worked with Bob Weston in the past and had a great experience with him)... and so we hope to be able to record another record with scotty possibly next spring or summer.
Basically, the general plan is to write more songs, meet more new friends, play in new venues and towns, and have a good time together...and of course, we will be attempting to continue spreading the love through rock and roll music.
8 / 11 - Corktown Tavern
with Netherfriends
Posted by jeff milo at 3:56 PM