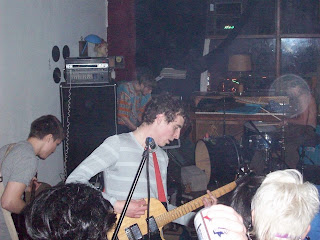 (Prussia at the AC Rich Building, photo by Mike Milo)

Having only been a year since the joint opened last September, I already have numerous enthralling memories connected to that big square building on South Saginaw, called the Crofoot. And, have since gravitated towards it's satellites of artistic churning - The ARC on 30 North Saginaw, the Phonotropic Fridaze inside Vernor's Subterranean Lounge (nextdoor to the Crofoot) and the hot-blooded revelry of a good, crowded, stomping loft show at the AC Rich Building (just down the street.)

So this week, in Deep Cutz and in Real Detroit - I slapped together a hurried, rambled reverence for (and I want to be careful about sensationalism here, but) the "Pontiac scene;" well, scene--for lack of a better word, because there is undoubtedly an invigorating energy up there, some kind of spurring electricity in the air. 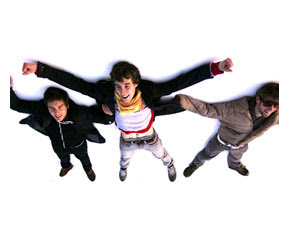 One night, ambling onto the Crofoot patio, resting my ears, I'm nestled in a magnificent vortex of sound; shouting over live music blaring simultaneously from the ballroom, the Pike Room and the ARC (interconnected like some musical jungle-gym) I discussed with Tom-just what the hell was happening in Pontiac lately. Tiptoing around grandiose determinations – we couldn't help saying: something like a scene onto itself.

True, it's a waaays up there, a 20 mile burn up I-75 through the corporate quaintness of Troy – but once you're there the air starts feeling electric, charged by this creative communal tidal wave: Phonotropic, a blazingly inventive artist's enclave and non-profit promoter, along with band-friendly AC Rich Building (home to Silent Giants printing co.) and a large venue with open arms to many touring bands as well as local favorites like Friendly Foes, Child Bite and Deastro. The indie/groove/reggae/pop quartet Prussia (pictured) has a strong following around town, plus the burgeoning bands from Waterford and Auburn Hills now have a more localized venue (Crofoot) to find listeners.

Come up and get a taste of the camaraderie – at Phonotropic's "Wicked Awesome Barbequed Musical Safari…Yesss!!!" this Saturday (Vernor's Subterranean Lounge, next door to Crofoot.) 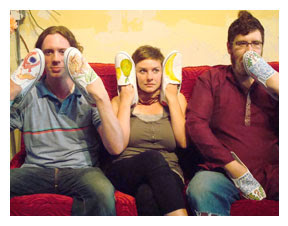 “It’s been the great romance of my life.” Phreddy Wischusen is a lightning rod of auspicious energy. Indomitable and blazing, the broad shouldered, glowing eyed, gray-stripe-bearded former restaurant manager (and former waiter) now helps manage the ARC (Artists Revitalizing the Community), located at 30 North Saginaw, in the heart of burgeoning Pontiac, an organization dedicated to providing a network (personally and professionally) for local artists, and to host weirdly exciting and inventive events. “A cosmopolitan utopia” working toward ending “intellectual attrition” that’s been driving so many young creative people out of this state.
“…finding a place where everything comes together,” says Phreddy, describing the whimsicality in which he and partner Adam Davis (of Manna & Quail) decided one night to obtain a building, specifically in Pontiac, “to start this art revolution…where artists are working in unity.” They obtained a space at 30 North around mid-06 and were soon put in touch with preservationist Blair McGowan, the owner of a new venue he’d planed to open in 07 called The Crofoot.
While McGowan tested the Pontiac waters with experimental club nights(into which Phreddy found himself hired as a pitch-man/man-on-the-street/word-spreader,) Dan indicated to the two stalwart art purveyors (along with their collective of friends/helpers) that they were hoping for a more stately, sophisticated night, that would feature art and acoustic performances instead of blaring house music.

“So we came up with ‘Phonotropic,’” said Phreddy,(located in Vernor’s Subterranean Lounge, nextdoor to the Crofoot), where “we get different bands to recreate their set” inside Vernor’s limited sound set up/space. “[To] do something a.) that will be fun for them, b.) that will work with the sound requirements and c.) give their audiences something different.” He recalls warmly Prussia’s resourceful utilization of sitars and djembes.

This Friday night, in the Crofoot Ballroom, Phreddy, Davis and Phonotropic present “Wicked Awesome Barbequed Musical Safari…Yesss!!” with Prussia, Manna & Quail, The Yachts, Daniel Zott, Silent Violet, The Codgers, Millions of Brazilians (see article), Chromos on Clouds, Vicious Cycles and more! “It’s our chance to be on the national stage, with local music and art [who’re] creating their own vibe.” Get to Pontiac. Doors open at 5pm RDWSafari urbane: myspace.com/phonotropic 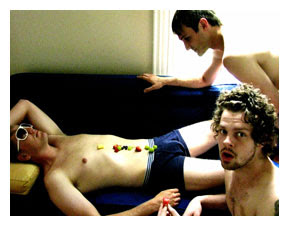 Drummer Zoz jokes that he’ll quit the band if they ever write anything slower than 130 beats per minute. While their songwriting may not be confined to emphasize speed, the fact is that local trio Millions of Brazilians thrive on propulsion; a shunting, guitar-buzz-saw drive, barrel rolling with numerous pedals and feedback over dance-ready piston percussion. Locked and steady percussions lend to a kinetic force facilitating roller-coaster hooks from dueling guitarists Derek Borey and Nick Cicchetti (on vocals.)

MoB, fatefully, started as a joke between brothers Derek and Zoz (aka, Chris), “like a Fu-Manchu kinda stoner-70’s rock thing,” Derek recalled, “no bass, just screaming guitars.”
Nick adds jokingly, “We thought that was super pompous not to have a bass, because a bass was ‘an inferior instrument.’” But, Zoz surmised, “Then, I think our influences came through,” (which included blends as distinct as Motown to Fugazi) “and we were like, Okay…it was funny for a little bit…”

Staring in summer 07, the trio already have half-an-album recorded at Tempermill and have played some commendable, well-received shows throughout the year. The brothers form a solid rhythm vibe with Borey forming “the anchor” low-end guitar that allows Cicchetti to flex any crazy expressive solo that fits. “There isn’t a band leader, per se,” said Zoz, “We all write each other’s parts, everybody’s hands-on.”

Speaking at the CAID during Detour’s Rock City we began reflecting on “scenes” and each expressed awe at the expanse of talent. “It’s perfect timing for Detroit,” said Cicchetti, “We’re finally getting out of being pigeonholed garage-rock; right now it’s just up for grabs and everybody just seems cool with that and that’s how it should be… music has no place for competitiveness.”

The trio all grew up in Taylor and have set up camp around Woodbridge. They are currently working on their next recordings and hope to get either an EP/LP out soon.

It’s a reliable recipe: animated guitar styling powered by two pedal-pushed acrobatic guitarists and a drummer whose ‘business model’ for a live show is pure heart-stopping excitement, (quite literally, he once almost passed out at a Lager show.) MoB play Phonotropic’s Wicked Awesome BBQ Safari, a celebration of Pontiac’s undeniably burgeoning musical community, at the Crofoot.
7 / 11 Crofoot
http://www.myspace.com/millionsofbrazilians 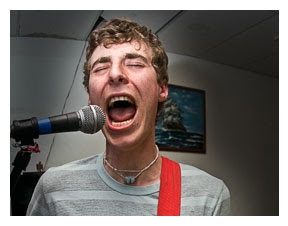 “We had shows steadily from February through November, 06,” Brian Larson, artist, designer, spearheading renter of the luminous/shabby shack/Shangri-La lofts known as the AC Rich building, (Pontiac’s underground live music beacon on Saginaw St.) is recounting the wild and extraordinary 3 years of his tenancy. “The lowest was 2 a month, sometimes every weekend, sometimes 2 shows a week.”

The 23-year-old artist, with roommates John, James and Adam, lives and runs this inspiring living space that doubles (once regularly, now occasionally) as a venue for live performances with local/touring bands on the second floor. “Some phenomenal acts came through here,” he marvels, standing at the “stage” area, now holding a printing press with which Brian is progressing his new project, a screen printing and design business called Silent Giants (with partners/designers Christopher Everhart, Edward Knight and Eric Mortensen, thesilentgiants.com/blog/)

Brian, (recently graduated - Art Institute of Chicago) started working/designing in Pontiac with screen-printing/embroidering company Earth to Earth, in 200. He moved into the second floor of AC in 04: “I loved this space from the first time I was in it, there's something special up here.” Soon he got the keys from the departing 3rd floor renters and claimed both lofts; moving upstairs meant more space downstairs and since he and his fellow roommates played in bands, (with PA and recording studio set up by John) downstairs – it easily facilitated the birth of this unconventional venue.

A solid year (06) of intense booking, ambitious line ups and a taxing amount of organization led to Brian relaxing a bit and now only opting for “special shows,” (often collaborated with Prussia’s Ryan Spencer as 3 of said-band’s members have many ties to Brian / and AC Rich.) “We never made money out of the AC Rich,” said Brian, “It was never about making money and we all had a hell of a good time doing it.” In August, AC hosts Prussia’s CD release show.

Phreddy Wischusen from The ARC/Phonotropic (at the Crofoot) (and AC neighbor), joins us, summing up the Pontiac scene, as artist’s collective: “Everybody’s down here creating, if I don’t do anything then I’m not gonna fit in…it’s organic peer pressure that pushes everyone a little bit more.” myspace.com/arthurcrich
Posted by jeff milo at 6:21 AM