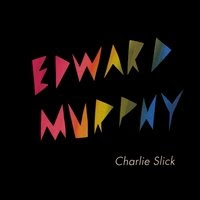 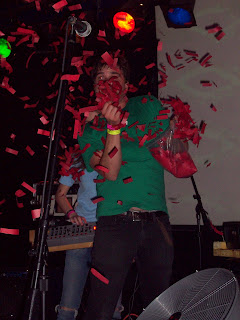 ...a few scattered thoughts on the record...

“Praying that Love ain’t nothing like a Bubble Gun”

It’s hard to sit still while writing this…I mean, you may not dig this if you don’t like to move, shake, bob or weave…as Charlie’s hallucinogenic circus romp rave anthem simply suggests, “Let’s Dance!” No sense staying locked in your stuffy stances in the back, sipping PBR and scoffing at all this mellifluous hip shaking; Charlie Slick has always been about liberation! Goofy, soapy, glittery, no one’s watching, liberation. A once punk-rocker turned flamboyant hunky nerd, offering himself up to the beats, with possessing synth swirls and arresting choruses, like some overly sexy cartoon or an unabashedly un-hip pied piper, with a weird wavy croon combining David Byrne’s shamanistic quaver with David Gahan or Gary Numan’s neon-glow melodrama. His sweetly buzzing melodies and cheesy/cool keyboard accoutrements may be minimalist basement compositions, but the man knows how to lay down a beat – be it simple 1-2 aerobics (Let’s Dance) or chest-pounding tribalism (Coconut Man) or New Order dancefloor firestarters (Too Busy for Love) or 8-bit rigid rhythms (Big Picture). Edward Murphy is Slick’s fourth proper album (all self-produced/released) and it features many synthesized dance storms that have been raining down at his live shows throughout the year.

Two particular live favorites, the blushingly suggestive “Sushi Party” and the hypnotic send-up to dessert factory workers, “Coconut Man” are quintessential indulgently goofy and rampantly rousing. But surprise cuts include the superb siren-synth beauty Moments, or the longing for love in a blurring and hectic turn-around-and-it’s-gone world (Too Busy For Love.) Moments, especially, expounds poetic reflections comparing breaking up to thrift store shopping: “the things I loved can soon be loved by someone else…”

The album’s title, for me anyways, feels born from a similar vein of David Bowie’s Song for Bob Dylan or Simon & Garfunkel calling out Joe DiMaggio; in that, they weren’t addressing the people per se, but the idea of them: the feelings, memories and ideas conjured when you hear these names. Eddie Murphy…Raw…Beverly Hills Cop…Gumbi…etc. Couple that with an inserted portrait of Eddie circa 1983 and the album takes on an air of nostalgia, but not simply nostalgia for the glittery dizziness of 80’s cheese and raucous basement breaking dance riots (though, that is indeed all over this album)—even though many erroneously summarize Slick as such—no, this has a lot more heart to it, at times anyway.

When he isn’t singing luridly about “eating out” sushi or about the men who dance beautifully at parties, or what he wants to do every time he sees a girl, he’s touching on some core melancholic musings to the revelry of teenage years, the loss of innocence in a world of change, the primal gut instincts of boys and their cutely awkward interactions with girls, the sound of a man “defining his confused existence” and hopefully starting to understand…with the help of his synthesizer…and his indelible beats. 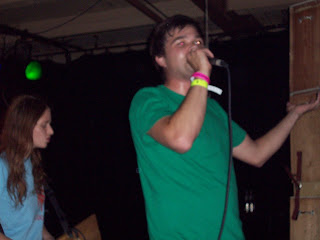 can i get a copy of this?