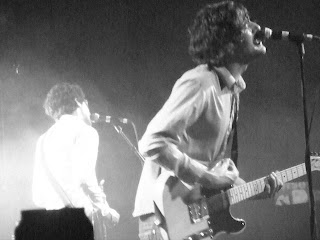 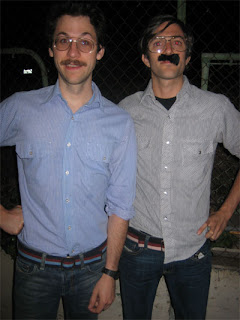 I'm Probably Making This Up: We Are Scientists
J. Milo

Running ragged through the European festival circuit through all of July, the peculiar and punchy We Are Scientists are coming back to the east coast. The sometimes-duo is quite a fitting band for this indiscernible glow-box culture where we've satirized everything so far beyond the stretch of imagination; Keith Murray, guitar/lead vocals and Chris Cain, bass/vocals perfectly fit the concept of a 21st century band – where an internet presence and blog support is their forte; which helps this quick witted, quirky duo from southwest California often find more popularity overseas than here in the states.
And, they're blisteringly sarcastic – literate to fall-down goofy, often throwing the excessive, unreasonable, trash-blur-decadence of an overly-media-munched existence back in the faces of those exposed to their icy-cool / hot-n-heavy dance rock.

Their major label albums (after their early DIY stuff), With Love and Squalor and this year's Brain Thrust Mastery, are ripe with ironic sonnets (and social commentary?) to the after hours' speedy thrills of no-time-like-now capriciousness and intoxication (with love or alcohol) that ends up with slept-in-your-clothes morning-headache reflections.

Where Squalor mined guitar-heavy-pop glory to its full extent, Mastery (which saw the departure of original drummer Michael Tapper halfway through recording) slides comfortably into a more chill, dance-ready futuristic new-wave revival, still filled with their characteristic vigor and bite.

For the 7th time since they started in 2000, they'll return to the Magic Stick. Here's a chat with Chris Cain (from Real Detroit Weekly) 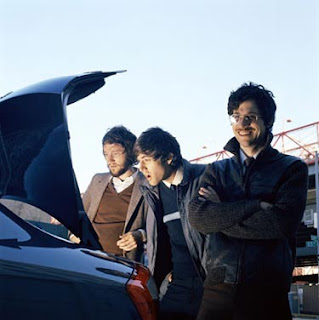 RD: Solidified a third member yet?
CC: We have a very solid relationship with Adam Aaronson (drums) and Max Hart (keyboard), who'll almost certainly be [playing] through the rest of this tour cycle. There will be a year off to write/record the next album; they're not officially "in" We Are Scientists I guess, but, also, they are…I dunno.

RD: But you find balance as an occasional-"duo?"
CC: We're a very…tight team, on the live circuit, which very much dominates our lives right now. On the road, we're a full fledged band. Keith and I are still running the business and are far more involved in all the more tedious aspects. I guess 'tedious' is probably not true, I actually enjoy the other things, the mundane financial concerns. We try to get involved, really, in every nook and cranny…we really have oversight on everything that's going on with We Are Scientists, and as often as possible, try to keep our hands dirty.

RD: That includes writing tour diaries where you formally review bathroom sinks?
CC: Doesn't get much dirtier than that.

RD: You're often described as having a surreal sense of humor…
CC: I'm actually in Barcelona right now, looking at all these Gaudí buildings, about 2 blocks from the Avenida de Dali, it's pretty strange you should ask – I love it when people describe our sense of humor, specifically our quotes, whether given in interviews or on stage, as surreal. I think it's accurate in that some of what we do seems off-message, if you consider our job outside of playing music to be promoting our album, but we don't really see that as our job.

RD: …and, you're seen as decent comedians…
CC: I think we have rather shallow comedic skills, at least, if your speaking relative to actual professional [comedians: Todd Barry, Patton Oswald], but we benefit of being relatively known musicains who are very absurdly tossing their hat into this other ring…judging [us] against Def Leopard and Axl Rose [we're] fucking hilarious!