The Roots That Will Weave: The Bowerbirds 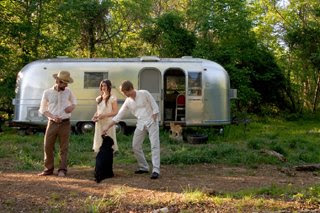 "You may not believe, but even we were scared at first.
It takes a lot of nerve to destroy this wondrous earth.
Were only human; this at least weve learned."

Hearing the Bowerbirds facilitates the illusion that there’s dirt under my fingernails, and it sets an irksomeness in me toward the electricity that’s running my computer and the gas that will sputter out of my car the next morning for a day-job trip over a paved road where a field or a swamp once was – the desecrated home of the birds and frogs and bugs.

The Bowerbirds signed to Dead Oceans at the start of the year and the trio (Phil Moore, Beth Tacular and Mark Paulson) recently reissued their moving, meditative work, Hymns For a Dark Horse, a candle-lit constructed collection of supremely woodsy, heart-filled campfire sonnets filled with deep-breaths in dewy wandering mornings, recorded in an abandoned school house in high-grass fields, hidden away from the sickening hum of wheels on the freeway pavement. Inspired less by bar scene romances or napkin jotted phone numbers, but, instead, by the cacophonus orchestral roar of nature and filled with more universal ruminations from narrators well aware that they are but a small spec in a beautiful set of nature's grander cogs. A sublte (and sometimes not so subtle) indictment of man's urban-sprawling homicide.

Collaborators Moore and Tacular, who currently reside in an AirStream trailer, living "off the grid" somewhere near Raliegh NC, put Moore's meandering poetry to the sublte instrumentation of airy acoustic guitars and the solemn hum of an accordion, with Paulson adding the light drizzle of a tambourine and the simple boom of a bass drum and mallet, beating like a distant thunder while their stirring harmonies enwrap in some windblown dance like a fire at the edge of the woods.

As Justin Vernon (who performas as/(with) Bon Iver) said in a recent Deep Cutz interview, after seeing Bowerbirds one night, at an Art Gallery in Raleigh, "I went home that night and I, literally, for the first time in my life, thought, I need to quit music...That's the only time that's ever happened to me." He was describing a time, a very fateful time for Bon Iver particularly, when his old band just broke up and he was contemplating what to do next with his life. He would, eventually, end up moving to a cabin and recording his brilliant debut album, For Emma, Forever Ago. But, it seems, seeing the power, the majesty, of the Bowerbirds was an offsetting moment for Vernon.

"Seeing Phil play those songs with Beth and Mark, I was like, I think I've missed my opportunity. I spent too many years being this emotive, non-hardworking songwriter that I've just becomet his joke to myself. Man, I was like, I have to quit, I can't even take myself seriously because that was so......good! It was so overwhelming."

Bon Iver has since been heralded with forming one of the most strikingly beautiful albums of 2007.

That said, here is the exclusive Deep Cutz interview with Phil Moore of Bowerbirds: 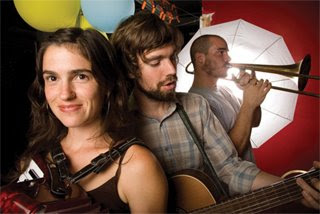 "We're Only Human, This At Least We've Learned": Bowerbirds

Milo/DC: This is a powerful album for me to listen to-- are the themes you presented on Dark Horse continuing in the latest songs you've written? is themes of nature, escapism, enchantment, what you'd like to continue or return to?

PM: Thank you. I'm glad that you have gotten out of the album what we sort of hoped people would get out of it. I guess it's not just escape that we're after though. I mean, we definitely have feelings of anger and frustration for being enmeshed in the culture we are a part of, but if we were to just choose to run off to join an Amazonian tribe that still lives in harmony with the land, it wouldn't really work. Civilization, capitalism, and big corporations are going to wipe out that forest eventually, if we don't maintain some sort of connection to the destructive culture and try to change its trajectory.
So, Yes, I guess we still are passionate about these ideas and wish to continue to talk about them however we can.


Milo/DC: How do you balance a defense of nature vs. the risk of misanthropy?

PM: It is difficult to do unless you come at it from an honest place, I guess. We don't hate humans; we just hate the culture they are trapped in or feel they are trapped in. We are all affected by the current destructive culture that I, for example, am benefiting from and other people are starving from. It's a virus, kind of, or an addiction and less to do with choice than we all realize. I tend to just want to write about the beautiful things I see in nature and not talk too much about the horrible and insane things that we are doing that I read about all the time, but It's hard not to write about those things when they are constantly on your mind. 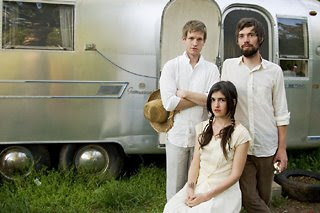 DC: do you still live in a trailer, "off the grid"? what is that life like...-- how is life lately, in general?

PM: We do still live in an AirStream trailer and use candles mostly at night and have a solar panel with a battery for other electricity. We love living this way. The blackberries are coming up right now and it's starting to get pretty warm in the evenings. We are in the process of building ourselves a small cabin, which is a lot of work, but very rewarding. We are leaving in a couple of weeks to go on tour for several months, which is a mix of sad and exciting.

DC: ...living in that schoolhouse must have had such an influence on the sound of the album and the writing......what has been influencing/inspiring what you've been working on lately... `

PM: Well, Our living situation now is pretty rad. There is a lot of space and lack of noise out here and it's easy to find time to be creative. If you are a person who creates art, a couple years of not having time to create that art and then finally finding that time will also inspire you greatly. This is currently happening and is wonderful and relieving.


DC: "we lay heavy on the earth" ...can you talk about where the two bonus tracks of the current rerelease of Dark Horse: Matchstick Maker and La Denigracion came from and what inspired them?

PM: Matchstick maker was inspired by my last few months living in Iowa before I moved out to North Carolina. I kind of hated those months but they were at least cathartic.
La Denigracion was written with the very first batch of Bowerbirds songs and was inspired by that time living in the school house. I was just feeling out how to write songs with this sort of theme but I still enjoy listening to this song. 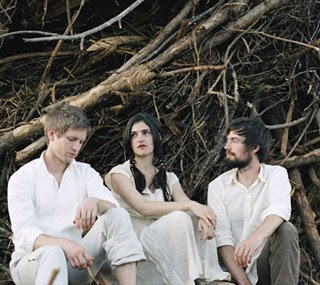 DC: ...do you often get interviewers freaking out on you with grandiose questions...like, what's the answer?? how do we save nature? ...how do you deal with questions like that...

PM:That's funny. We don't get too many interviews with that question, but that did happen once in a telephone interview and I was just kind of dumbstruck and said something like, "recycle, reduce, reuse?"
It's a tough question and I'll give it a shot and answer it, vaguely. At this point it's all about community and education and everything is subject to where you live and subject to change, but I don't think technology (i.e. solar power, wind power, etc.) is going to catch up with the current amount of destruction in time to save the day.

The Bowerbirds play with Bon Iver, 7/21 at the Crofoot in Pontiac.
Posted by jeff milo at 5:57 PM

Great article and interview! I'm glad you brought some attention to this wonderful band. However, I tend to think that although Bowerbirds are actively engaged in ecological lifestyles that soak into their music, the album is far more than just that--much darker and soul-searching--the woods they sing about are a lot more Dante's Inferno than Thoreau's Walden.