Night Shall Eat These Girls and Boys 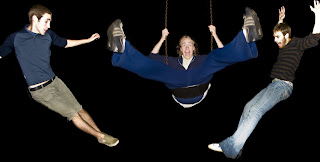 Tight, tranquil pop songs with heartbreakingly winding poetics, low-key fuzzy muffled chirpy-folk, like a hazy traipsing firebug chase at twilight; Night Shall Eat These Girls and Boys is a minimalist electro-pop collective, from Ypsilanti. They take their name from an e.e. cummings poem; "I've always liked weird, long names," said Willy Skillets, the singer/guitarist/and beat percolator, the one constant member of the 15+ member rotation, who once played in band with a 12-word-long-name. He's been joined throughout the summer by bassist Alexander Lopez and keyboardist Austin Hermann, aligning with Skillets upon his return from EMU for the summer, for the tour he had planned earlier in 08.

They self-released 2 CD's, a demo EP and the more proper Where Your Interests Lie, 7 songs of tragic beauty and often watery-eyed gushers of crumbled relationships or a more worldly reverence for the things that really matter in life, put to aerodynamic, singularly stunning electro-groove instrumentation, often stripping it all down to the most simple of melodic statements from the trio (all 21 or younger), who know how to harmonize and often bring a very danceable beat to the table. 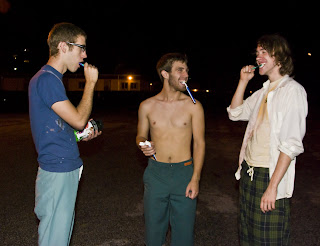 They chart the band's genesis to 2005 – born from Skillets constant writing and, thus, constantly searching for new musicians with which to play or record. "When I started out, I played solo, with a drum machine all the time," said Skillets. "After a while, when I realized the advantages of a group, I stayed away from that. But, I went through 4 drummers, drummers just vanish all the time. [Also,] drummers don't like to be told what to do, which is fair, that's like they're arena. But, I decided with the specifications I wanted, it was easier just to make it electronic drum stuff."

Speaking on collaborations, "…it's just easier than making new bands all the time, just bring people in and out...When we get people playing different instruments, they usually take the parts and modify them," said Skillets. "Austin went to town on a number of the keyboard parts."

The trio all attended Oxford High School together, in Oxford, MI, north of Waterford. Lopez (who performed in a unique electro band called Senor-Senora) had played drums in a band with Skillets in high school, while Hermann played in a band called the Guava Players.

“Just to make it more convoluted,” quipped Skillets, “last summer we all recorded stuff together even though they weren't playing with me at that point.”

Indeed, lines blur when it comes to delineating projects, or which songs will end up where.

Hermann explained, “It was always like...Will would come back from school during the summer and be like,” (throws his arms up and does ‘jazz-hands’) “I got a bunch of muuuusic to plaaaay!!!”

“Will had been planning a tour for this summer,” explained Lopez, “but his old band [disbanded] so he came home [from EMU] and said, ‘Hey, Alex, Austin…I need a favor…wanna learn all my songs and come on a tour with us?”

Collaborations, as well as song construction, is healthily loose. Says Hermann, “Will would show you what he wanted but he would never kill you if you added something extra...so I dunno, it was a pretty loose process.”

The vibe of heartbroken singer/songwriter sonnets has drifted into more beat-heavy dance modes as of late…getting “out of that emo-state-of-mind,” said Skillets, “as I think less in those terms I like to make dancier stuff…I just feel dancier, so that’s where it’s going…”

“And our two danciest songs don’t have any lyrics,” Lopez adds.

Skillets shrugs and jibes “Cuz I don’t know how to write happy things…” The trio chuckles.

Skillets, speaking on the live chemistry of the trio, notes how Lopez was able to develop a marvelous amount of stage presence from his tenure in Senor-Senora: “Which is something that I was looking for because I usually ended up doing too much (electronics) to do anything so that was something I wanted. And then, Austin isn't...he's like...plays the keyboard in his band cross legged, just chillin out..., so I like that balance, cuz Alex is pretty crazy out there and we're like that sometimes, but then...its' a fuse of elements, that’s what I was hoping to bring. Because when you have the music mostly written--it's about what the performers bring to perform it; it doesn't matter that [Austin] writes mostly jazz/ragtime parts on his own, and Alex writes acoustic to loud sounding guitar parts, it's about how they perform in any given setting...that's what I wanted to bring them in for...”

See them live 8/17 at the Dreamland Theatre in Ypsilanti
Or 8/23 at Corktown Tavern
listin here: http://myspace.com/nightshalleat 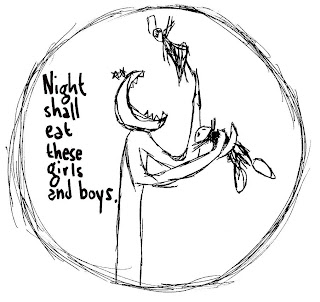