It's a windy, chilly day, settling in at the WAB, nestled down in the open air street-side café, with beer and veggie burritos - and the hinted chill of oncoming autumn.

I ask local trio Sik Sik Nation where they see themselves fitting in the expansive musical institution of Detroit – and they say, that's just it..."We don't fit in."

"We're a strange band," said bassist Eric Oppitz, "We're too garage rock or too rock-n-roll to play with the indie bands, we're too psychedelic or too strange to play with the rock bands. We're kinda in-between somewhere, but hopefully we make our own scene." 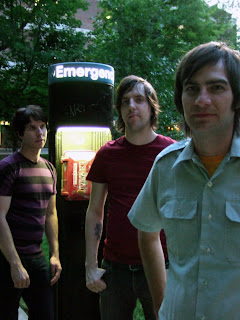 Even tracing the band's "home" is difficult, as Oppitz lives in Ann Arbor, drummer Rick Sawoscinski stays in Ypsilanti and singer/guitarist Sean Morrow resides in Livonia. They are, for all intents and purposes, simply a rock n roll band, thunder-drums and banshee-guitars and swinging-grooves and all the raucous shred and punch vigor you could ask for…Yet, they often send some ripples through typical back of the venue debates because they linger toward garage (or psychedelic) sound, or because they don't run with any cliques or labels.

"Do we wanna be an indie-pop band?" says Sawoscinski, "No, but we don't want to be really obscure either, we want to be accessible. [But,] it's confidence, because we write the songs we want to write."

"We didn't have those ties," says Oppitz of the progress, notoriety, recording and live slots they've attained, as a unit, since forming in early 06. "There's been no ties, no connections, nobody that we've met from outside of this band."

Picking through his meal, Morrow suddenly interrupts, "…there's cauliflower in my burrito…?"

Oppitz, continuing, "It's more satisfying that way, cuz you feel like you're working toward something."

"I mean, garage rock…" Sawoscinski begins, "we have great garage rock passion, but I feel like that word's become a dirty word in Detroit…"

"I should beat you up for saying that!" Morrow mocks the typical knee-jerk response.

"It's back to the late 90's," says Sawoscinski, "when people started saying emo too much, I don't want to see garage rock turn into that."

"If we say we're a rock band," says Oppitz, "nobody thinks twice about it, but if you say, 'oh, you guys are a garage band,' there's this negative connotation, and certain bands aer like, 'oh, I'm not gonna play with that band.' Well, wait a second!...."

"Being in a band is synonymous to being in high school," said Morrow (who speaks from experience, since his day job is a Junior High teacher.) "There's so many unwritten rules and everybody apparently knows them, but, as stupid as they are, everybody follows them…" 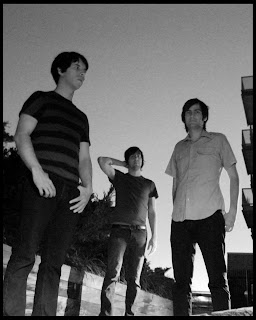 Indeed, this is one of the most down to earth bands you'll find in the city – because they are out there, at the shows, on the stage, checking other bands out. They don't drag their egos with them, they don't strut to show off their vintage jeans, they don't bow to trends; with hearts on their sleeves, they pour out all of this musical passion onto the stage (and return it, through enthusiasm for other local acts, by consistently going out to other bands shows.) Indeed, I run into this trio on random occasions for other band's shows more than many musicians…Often, when they're heading home from another bands show – they'll head over to Morrow's home, set up and start jamming – running on pure, inspired adrenaline. They've played with Loco Gnosis, they've played with X! Records, they've played with Quack and Qui-Sci…

"Our CD Release show," says Sawoscinski, of the May debut of their full length, 8 Style to the Unholy, "…was the Questions and Silverghost…you may never see that bill again, probably. We just want to be friends with everybody…we're not very cliquey."

"This asparagus," Morrow continues, back with the burrito. "I don't know how I feel about it. When I envisioned a Veggie Burrito – I envisioned green/red peppers, onions…"

Ah yes, I suggest, by definition – it's still a veggie burrito. Just like, by definition, no matter what the collective perception is…you guys are still, just a rock band.

"If everyone has a different experience with it," says Oppitz, "then it's good. That's great."

The band spent much of 2008 recording 8 Styles with Ann Arbor's Jim Roll – an experience they raved about, regarding his laid back approach and allowing the trio to push some experimental jams. The album is a strong statement of propulsive, dark psychedelia mixed with arresting pop-rock hooks and heavy pedal indulgence – an album written equally between the three members.

They play the Blind Pig on Aug. 22nd and the Lager House on Aug. 28th. Dig some tracks from 8 Styles to the Unholy at: http://myspace.com/siksiknation