Seeing More: The Silent Years and 'The Globe' - the Deep Cutz Interview with Josh Epstein

"There is a song that the universe sings / there is a poet that heard the whole thing..."
-The Silent Years, "The Axiom" 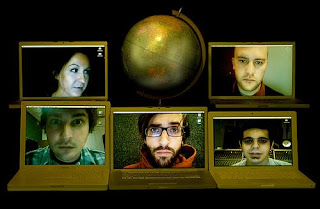 The Globe is a dark and mystic record; a harsh look in the mirror; a barrel roll through an endless stretch of sky; an endless search or a tireless escape (from inevitability); rife with metaphors for the deceptively beautiful (or otherwise normal) layers of the harmlessness of everyday life and the often powerlessness of these high-strung humans, driving to work and pretending everything's okay while they may as well be running around with their arms flailing.


Experimental song structures shatter the verse-chorus-verse standard; yet, since these sublime and stirring ballads are filled with smooth honey toned vocals and serene synth chimes and these rousin' risin-over-the-wheat field-good-mornin-sunshine folky grinning piano pounds...it feels, still, like a pop record - albeit filled with grand stances and a daring curiosity to chop songs up, swerve them to left, invert the vibe and change the rhythm, but a pop-sounding record nonetheless.

Oh, but not without a darkness. Common aural themes include a constant percolation of crackling feedback right below the surface of these sweet-melodied tunes, which rides with the lyrical theme of hard-looks into the mirror: "these are the lies that we tell ourselves," sings Epstein on 'The Axiom,' "...look in the mirror but you blame someone else." The listener is at once enamored, enchanted with the spectacle of sound, the crashing cymbals, the spacey keyboard accompaniment, the plethora of pedal-effected guitar diserations, and yet there is a lurking ominence...or, more appropriately, a ponderance, in the lyrics. There's blue sky above you, and it's beautiful - but if you look down you see the concerning holes in the rickety wooden bridge upon which you're standing.

The experience of the Globe is bracing and invigorating, like the skydive-instructor who pushes you out the fuselage at "2!" in the middle of a 3-count. The beauty, the glory, the fun of the freefall (be it keychanges or wild time sigantures, or feedback storms) is that the ensemble (Pat Michalak, Mike Majewski, Cassandra Verras, Ryan Clancy, Fabian Halabou, Josh Epstein) is always able to pull together the vision of the song - the chute always opens.


Indeed, the album is of two minds - pulling apart in sound and song; the lyrics tumbles into dark scary holes of hard frought realizations about the world and the self - some sort of through-the-looking-glass-twilight-universe, an ethereal plain...this is where we expound the bittersweet reflections of 'On Our Way Home' where we realize "...we've just become big embarassments..."


The other side of the mind, the music, clings to ideas of hope and love, which one feels in the warmness of melody, ("Black Hole") the cheery cherubic drive ("On Our Way Home") and rousing percussion ("Ropes") that constantly swirls and futiley coaxes the meloncholic lyrics. Such is the flow of songwriting--the music is the feeling, the impulse...but the words are the observance, the analytical, over-thinking...push-pull...jump or don't jump...

The Globe could be anything...It could be a battle against blissful ignorance, (the same ignorance often embraced by typically understood sensibilities of 'pop music,') and the inevitable victory of wanting these pulling, unseen forces of the universe to "...open up our eyes, wide, so we can see more." Our wayward narrator comes to an awakening - "I don't need anyone or anything in this life, I just need something to go right..." 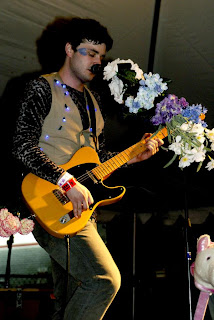 "I'm happier and happier with the things we do," said Epstein, on a ridiculously humid summer day, over brunch in a diner. "We're recording an EP tomorrow...well, hopefully starting tomorrow."

"And this is all the 'weirder stuff' you were talking about?"

"It's not..." he pauses, "I mean, yeah, kinda, it's weird and it's really melodic at the same time. I'm really excited about it. I think it's a step forward, I think everything should be a step forward."

I say, "Globe is absolutely a step forward, from the debut album..." (The album comes out August 26th. The band has just recently signed to New York based Defend Music.)

"A lot of it comes from playing with new people. They all have their own sounds and their own unique idease, so that changed things."

"Also," says Epstein, "just......growth. It had been a year and a half since we recorded selt-titled before we started recording the Globe. In a year and a half, unless you're in a coma, you change a lot." "It's been a long road..." I say... "It has," he says, "strangely...Time always depresses me though. I wish you could stay the same and still have time elapse. I just don't like the idea of getting old, it's this weird...connotation of getting old, these weird things happen to people, especially creative people..."

"I'm really excited for the globe to come out," he continues, "I think that it's closer to what we want the band to sound like..., then anything else. I just can't wait to keep making more and more music, do more and more creative things..." I say, "There's a mysticism to the sound and to the lyrics..." "Yeah, I think so," he offers. "It's a loose concept album, the concept of making sense of yourself in relationship to the universe. Writing for me is just cathartic, you just write and you didn't even know that that's how you felt until you wrote it down, I love that about it. Maybe that's selfish."

"What about a song like 'On Our Way Home?'" I ask, "This acoustic-led wandering, with big crescendos and a sort of magical realism to the lyrics, of gathering everone together...and burrying photo albums...and everyone that's ever been being in us..."

"It's kinda matter-of-fact," said Epstein. "It mentions things that could be...emotionally difficult. It mentions, matter-of-factly, almost as if they just exist in the same respect as everything else, everyeone we've ever known has been laughing..."

"What about structurally?" I ask, "A song like Black Holes, this 2 1/2 minutes of steady building to...this really beautiful melody that ebbs and flows, and you get to it, and it explodes and we ride it for 45 seconds on this fiery guitar riff, then the song ends...Or, my personal favorite, Ropes...it's this really unique, spasmodic scale of a melody...feels like such a leap from the first record..."


"We're trying to focus on writing melodies away from the context of the chords that they would be imbedded in..." said Epstein. "So, for Ropes, the idea started off, it was an acoustic guitar song, but I really like that melody, and I thought that at first we were just gonna have drums and vocals throughout the whole song - which, we kinda do for the first verse...Once you have a melody that you really like, (this is something i've been realizing lately, cuz i used to write songs based on chrods), where, lately I've been thinking about the fact that if there's a melody you really like that you can put it in so many different contexts, that it can change that melody so drastically and you can really do a lot of it, almost like there's this movement going through this whole piece that's changing and I'm more interested in getting there with music. I think everyone in the band is really well suited to play music that's constantly changing..." 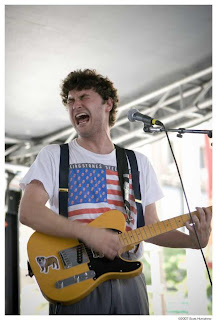 "There's a much more striking expressiveness," I offer, "...in style, in lyrics, ...and musically - for example, your array of pedals, on the guitar..."


Epstein nods, "I always think it's interesting to listein to a record and think: oh man what the hell is that? I love that, I love that about music...and I think that, i dunno, I'd never wanna play guitar to show eveyrone how fast I can play or how many scales I know, I wanna play guitar to in the same way that I sing: to convey what I'm feeling at the moment. ...pedals are instruments themselves, a lot of people think that you just plug in a pedal and go and it's all the pedal doing all the work, but really you have to learn them..."


"What about the wilder, grander structures?" I ask, "...splicing two parts together, having different choruses, stretching out your bridges..."


"I think that I've always had a lot of ideas, sometimes it's to my detriment because I'm all over the place, scatterbrained, and sometimes it works well because I'm constantly trying to think of new ideas. For the people that I'm playing with, now, are way more open to running with the new ideas so...it's almost more of a...its just much more of a comfortable thing for me, and I'm not saying I'll lump that in with all the ideas, but if I have an idea I'll bring it up and [the band] will be like: yeah let's do it! Go with it! And veer off on tangents, so writing the songs would be like, what about this? Well, we did this by accident and it sounded great, what about this? Let's connect it to this..."

The Silent Years play with Prussia, on August 16th in Pontiac, at the AC Rich Building. Their album comes out August 26th and they play a release show at the Magic Bag in Ferndale, on September 6th.