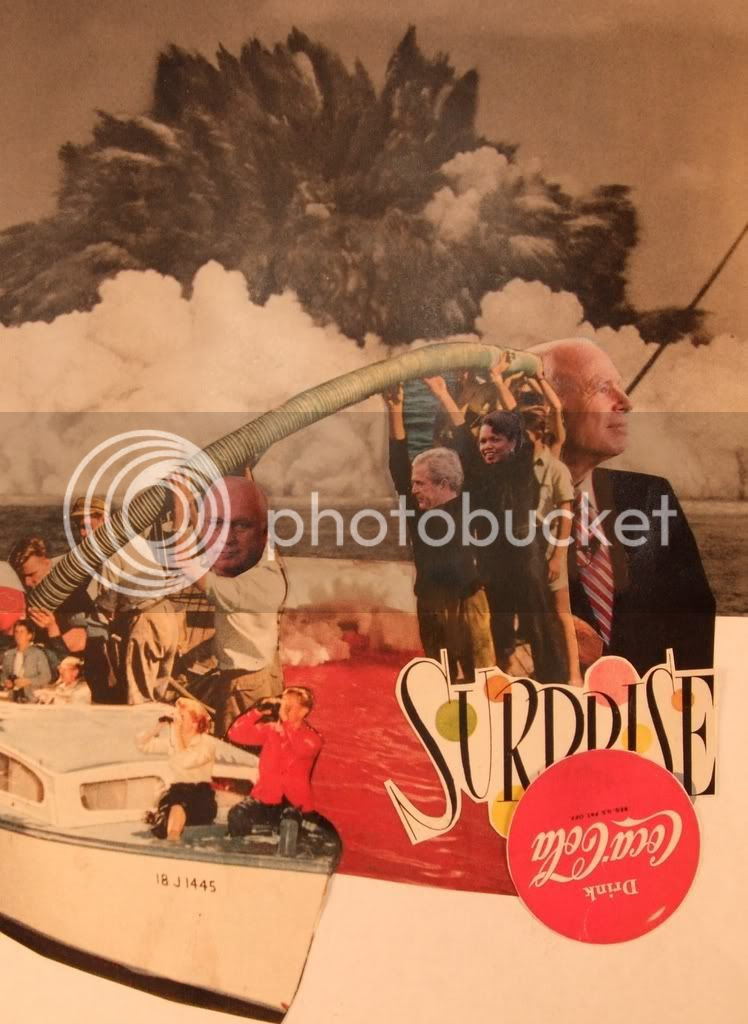 It's not quite music--but, hopefully the start of a trend in covering other artistic outlets, here on Deep Cutz, especially those addressing political issues. And, The Last Days of 1984, the latest show to open at the Zeitgeist Gallery - is certainly so - addressing "political, social and environmental issues" to purposely be closely coordinated with the Presidential Election on November 4th. (Register! Vote!)

A sampling of the show, featured above, is the staggering and often hypnotic collage work of Deep Cutz ally and local musician Nicholas Koenig (My Dear, Watson / You Look Adopted)- who is featured in the show curated by Eric Mesko and also includes the work of Marilyn Zimmerman, Roxy Lenzo, Stan Gilliam, Hugh Wilbert, Korea, Brian Coutts, and Mesko...

From the site: "The opening night reception on Sept. 20 will feature "Mesko Rants", "Maugre and the Puppets Chants", and a new play from Ron Allen, "Bread and the American Dream", to be performed opening night only, and politically and socially conscious music by Greg Sumner…and more! Performances begin at 8pm (we'll post the schedule as soon as we've got it set). In the Bar Gallery "The Hudson's Building Demolition Tenth Anniversary", a photo exhibit featuring various photographers’ takes on Maugrè’s unique series of pictures that adorned the building until the very end..."

Vist the Zeitgeist Gallery (and theatre) online and in person at: 2661 Michigan Ave. in Detroit
313-965-9192
gallery@zeitgeistdetroit.org
Gallery Hours: Saturdays 10a - 5p, and by appointment
Posted by jeff milo at 3:41 PM