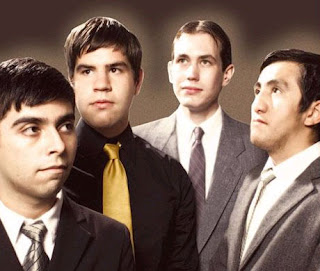 Juan Velazquez is a gay Mexican who plays guitar in the “tropical punk” band Abe Vigoda. He recently had trouble crossing the border into Canada during the tour. He explained this to me while driving in L.A. traffic, cell phone in lap, exclaiming into the speakerphone en route to his day job at a record store. Even in the year 2008, the government still considers punk bands “dangerous,” which makes border crossing a hassle.

“If you say you’re in a punk band, they’ll get upset,” Velazquez says. “Once, on the U.S. border, we showed them all the paperwork and said ‘hey can you help us out getting back’ and in the process he looked up our band on MySpace. A lot of times the border will look up your tour dates on MySpace and check out your band, which is really weird. The U.S. border guy was like ‘Abe Vigoda, what kinda name is that’?”

The band name, a reference to the actor who played Sal Tessio in The Godfather, started as a joke back when Velazquez and lead singer Michael Vidal were in High School. Although Velazquez doesn’t care for it, he says it’s silly and has stuck. Abe Vigoda have an alphabetical advantage in my iTunes which benefits them greatly in that after a few Ah-ha and Aaliyah songs, their album, Skeleton, is the first record that pops up in my playlist. So, I click it ¾a lot.

“We didn’t beat ABBA, but we beat AC/DC, which is cool,” laughs Velazquez when I tell him about their alphabetical dominance. “I don’t know if there’s any advantage but it’s nice to be at the beginning of the aisle at the record store. I work at a record store in Hollywood and the first section of CDs you see is our stuff, which is kinda cool.”

Velazquez works at a record store in Chino, where Abe Vigoda soiled their roots. He hasn’t sold anyone his band’s album yet, but he’s recommended it. Their music is spaz happy ska-punk bursting with Capri Sun flavored rumba riffs and Jumanji stampeding drums. The lyrics don’t make any fucking sense and I’m convinced they might be loops of Tarzan howling in the jungle. This year has witnessed a couple other bands, Vampire Weekend and Foals, enjoy success with this formula of frantic drum rolls accompanied by tropical ukulele plucks and preppy cardigan struts.

“We have similar drum beats sometimes,” Velazquez replies in regards to the Vampire Weekend comparison. “We played a couple shows with them in L.A. recently and we were hanging out and talking about the comparisons and neither of us really see it. But I think people that like them could like us potentially.”

I’d offer that Skeleton, Abe Vigoda’s latest album, is more frantic. If Vampire Weekend is this generation’s Graceland, than Skeleton is Shaft In Africa. Drawing from a heavy influence of Sonic Youth and World Music, this Chino collective make music centered on repetitive spurts of giddy gyrations that tree people might dance to during a sacrifice to the gods. With song titles like “Gates” and “The Garden,” I wondered if there was some religious subtext. Or, more importantly, would Adam & Eve fuck to their music?

“I don’t know, I guess so, it’s pretty frantic,” Velazquez laughs. “It be pretty awkward sex, pretty quick. I guess they could.”

“I would never wear a Hawaiian shirt though, that’s for sure.”