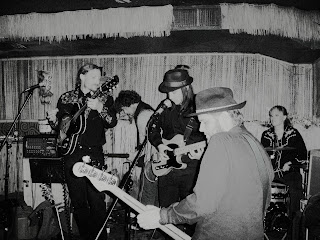 There for the Music: Duende’s On The Steps

The wholesome souls of the motley and mystic Pinkeye Orchestra, climbed the stairs of Corktown Tavern, in the shadow of now-lifeless Tiger Stadium, flicking away one last cigarette in the muggy mid-summer’s air, ascending to a makeshift recording set up (on the 2nd floor) where the baker’s dozen of them settled in for a stormy sprawling musical avalanche helmed by a gray-haired shamanistic poet.

Thus, a reckless release of communal euphoric calamity ensued; an ode to the history of this city's art and activism, spurred by a chance meeting between Jeff Howitt, a humble hobo, rock n roll classicist, and working-class musician with a huge heart and immeasurable affability with Detroit's renowned mystic, activist, leader, musician, poet, John Sinclair.

Their recorded efforts, Tearing Down The Shrine of Truth and Beauty, an exploration in musical spiritualism and an exorcising ceremony, was just one of many events that the long-haired, fuzzy chinned Howitt, with his local label Loco Gnosis, its all encompassing-cast band Pinkeye and his main band, the more traditional blues-rock of Duende, were invited to play this month, in helping to celebrate the lineage of Detroit art and music. The group recently performed for Sinclair’s 67th birthday party (where he was named poet-in-residence at the Bo-House). A few weeks ago, the Duende quintet performed for the 44th Anniversary of the Detroit Artist Workshop, a tribute to the Sinclair-co-founded artist collective.

“Playing [the anniversary show] was close to my heart,” said Howitt. “It was a beautiful feeling. These people are the remnants and progenitors of a cultural foundation whose values and attitudes have consistently been the starting point for any mother fucker who has tried to kick out any jams of whatever variety from this town…this is our birthright, our lineage. And, to be immediately participating and creating in a living lineage is more than inspiring…"

Wildcatting, it must be noted, will be presenting their tribute to 40 years of Jams-Kickin by performing an all-MC5 set (listen to them live on Detroit Today, Friday, between 11am and noon). 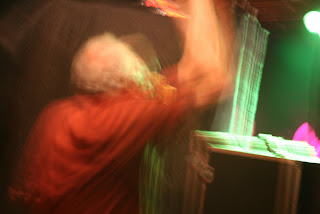 Meanwhile, Duende also releases a "stacked version" of their original debut On The Steps, which collects new recordings, with old, unreleased tracks, meant to "show who has been with us and contributed to Duende over the last two years," said Howitt.

Duende currently features the tight rhythm duo of Laura Willem on drums and Jason Worden on bass, with the flavorful expressions of ("Jelly Roll") Joel McCune on guitar. As guitarist Johnny Miller plans to depart, the band plans to forge on, setting to record a new full length this winter in New York with Matt Verta-Ray (during a showcase tour with Wildcatting/Oscillating Fan Club).

"Approaching Duende, initially, as a recording project allowed for the cast (including Hotwalls’ Ryan Milligan, Bored Housewives Lance T. Sanders, Jorge Cortez and briefly, Carjack) to generate itself for their accompaniment to be much different than what they might do themselves in their own band(s)," said Howitt. He adds, admiringly, Duende is “…a roots bands but roots like Woody Guthrie backed up by Sonic Youth.”

Delving deep into the origins of Duende, (a word which describes the middle ground between the dark and the light, good and evil, etc), Howitt covered all instruments:

Guitar: “Jorge (Cortez) and I loved Chuck Berry and would watch watch live performances and try and retain some of that regal sense of bacchanalia. I used to drive other more groomed players nuts with my shuffles. Jorge knew his stuff but was also into the whole Disco Rock thing we have in Detroit so we did droning and snaking well even though for me it came more from the Monk's or Velvet Underground.

Drums: “Laura for the most part was learning her instrument as we went along,” said Jeff, noting that with only about a dozen rehearsals before the band took off in late 06, she’d already developed “more accuracy and presence than people who practice themselves away from what they like and never join or can stay in a band. For her, it is the associated experience, not just the exercise.”

Bass: “Jason and I have only been in bands since I got back and didn't realize until a couple months ago that we met through a local mystical friend…(bassist) Ryan Milligan (from the Hotwalls) has so much gumption as a singer it is hard to expect other newer members to do all his parts. Which was really evident on the original sessions. It would be hard to not see him continuing to record with us.”

more Guitar: “We've always hired from the inside. Johnny Miller really identified with
what we reached for and hit sometimes. He brought a lot to the stage and did shows with him bowing stand up bass and Jason cello. He could play something that Zappa would have spit his coffee out at but had such a strong traditional sense.”

Returning to Pinkeye, Duende, and Rock n Roll history…44 years of the Detroit Artist workshop and 40 years of Kick Out the Jams…it’s hard to resist hinting at the passing of a torch…the inheritance of the lineage, continuing on with remnants of the past…in the hands of classic-rock enthusiasts like Duende.

As John Sinclair put it, about the local collective to which Duende (and Pinkeye) are focal points: “They’re there for the music and they’re playing out of love and curiosity and they’re comfortable in their skins and, well, it’s immediately apparent that they’re my kind of people.”