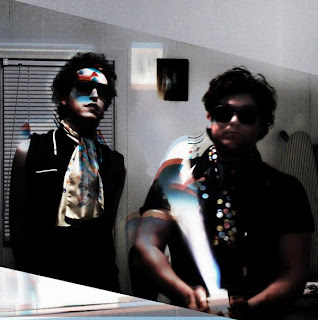 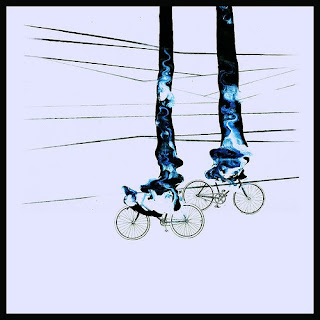 Hidden Ghost Balloon Ship -
["I hope you enjoy this 'experiment in sound...'"]
Completely puncturing that gossamer filmy layer stretched over the firmament of the already dreamy-style of, and forgive the retread of bastardized genre buzz words, ambient art rock… this is something demanding more than the usual name drops of Scott Walker or Eno-n-Byrne…a grand experimentation and exploration of beat creation (by LTD-Little Tommy Daniels- from Pas/Cal); up on the rims and tumbling down to the bass (“Non a Non”) or a more soul/hip-hop vibe (“Jonaccce”) or a more tribal groove-blended into polyrhythmic spills (“Latest Journey”) all the while augmented by Trevor Naud’s electronic (with some guitar) accoutrements that mostly balance the rhythm with a steady swirling of wavy cinematic sweeps from the synth and long sawing strings serving as dramatic foundation for the sometimes-baffling, detached melodies to warble-as-they-will

…melancholic, humanistic, romantic…it percolates a dark function inside us all, it’s haunting echoed synths-and-strings and it’s looming hums and booming builds cascade a cold and gray world that is off set by the warm (and airy-as-ever) vocals of Trevor Naud (from Zoos of Berlin) whose ability to flit his voice to such a high ethereal realm and still trill it poignantly before sliding it down into a thicker moan would lead some to posit him some reincarnated love child between David Bowie and Colin Blumstone, all the while dripping with a palpable and intriguing devastation that can feel so human at times, but at other instances it lingers indeterminately, more like some cloud born narrative watching over all of creations absurdity.

“Experimental,” as they say, certainly – and to a tee, but simultaneously so pleasing to listen to…in the tradition of Pas/Cal, where the duo met, in terms of providing sheer boundlessness to the pop format while never stretching the senses into too alien of territories…and never staying put…this album never solidifies one sound, one feeling, or even similar instrumentations, as Naud brings an multitude of different effects onto each song’s table…nor does each song, (and here we could throw in a dream metaphor, due to brevity) stay with you very long, leaving you in this hovering state of glee or somberness as one chapter trails off and the other opens up to you…… …I don’t know, truth be told, it’s really hard to describe in a song-by-song sense…

Hidden Ghost Balloon ship, like Naud’s South-South Million with Zoos-comrade Daniel Clark, was originally (at least introduced to me) as strictly a recording project, but the band makes their debut live on Friday, performing at Zombie Dance Party 5. “…while P/S was on a bit of a live-performance hiatus, and Zoos was in a slow period, we discussed the idea of recording a ton of drum beats on cassette tape and letting me sort of "have my way" with them,” said Naud.

LTD set up his drum set inside at “a massive factory space” for months, (while working as an Industrial Hygiene Consultant) and set to work recording beats (dig the groove of “Nineteenth Usher”). “I was surprised when he called me from the parking lot of La Fondue saying, "I've got some beats on tape—and they're huge,” recalls Naud.

Naud took the cassette recordings, pulling highlights onto his home computer and started editing the beats and adding instrumentation. “Not all of the drums are from that factory, but I think if you listen to the record you can tell which ones are….Some of the stuff we worked out in his basement (the Ringo Starr-styled "Jonaccce" beat) or in his kitchen (the Kraut-tastic "Non A Non").”

“There are a few tracks that are devoid of beats, too, and they serve as little narratives or mood pieces throughout,” Naud added. “It's a pocket-sized concept album (at their longest, only a few songs are over the two-and-a-half minute mark). The story is of an old man, a self-made reclusive. As the day progresses, strange things happen to him: inexplicable phone calls, a whale in his backyard… and, finally, a visit from a speechless character named Midnight. Then… the ultimate retirement.”

Hidden Ghost Balloon ship was recorded and mixed by Dave Allison and mastered by Collin Dupuis. It will be available digitally – more info at; http://www.myspace.com/hiddenghostballoonship 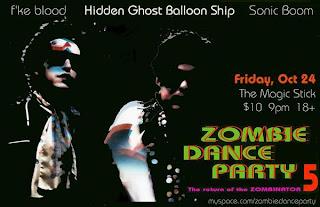