It’s 1 a.m, the Magic Stick is closing down after a set from the Marthas…initially, I wonder if it’s exhaustion or the recent ill-advised shot of tequila that makes me think I just heard Jesse Shepherd-Bates say something about bringing "seven guitarists" to Friday's Obama rally/concert, Barack N' Bowl (in the Garden Bowl, with Satin Peaches , Pewter Cub, Rogue Satellites, Duminie and Smashed Windows, 10/10) 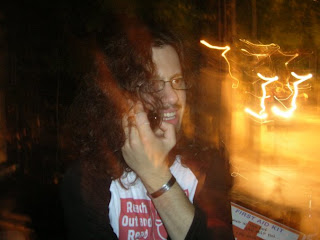 But really, it’s par for the course for the intriguing and exhilarating JSB Squad, spearheaded by the young multi-instrumentalist and aided by (almost-) countless local musicians, (including Satin Peaches, Mick Bassett). This line up could be as large as 14 players. Pure guitar-n-drums propulsions – like some relentless rocket-launched forklift of roots-rock's golden-hue n' rich flavor with inevitable flashes of punk's errant shredded exertion but wound up by often beautiful vocal melodies and goosebump-falsettos that mix an engaging singer/songwriter vibe with distinct hard-hooking exploration.

That said, I hope by now all of you are registered to vote – frankly, this may be one of the most tumultuous and important years in human history. Whatever happens, consider the future, and consider coming together. No more of this contemptible fear-inspired partisan tunnel vision. Consider unity, consider progress, consider where we've gone wrong. This is a torch-passing year between generations - and one choice embodies that…Vote!
Myspace.com/jsbsquad

Moving on into more politics...

The entire debate (on film, and transcribed) can be found here:


Frankly, this is where things get nerve-wracking...the political bottleneck, the crystalization of opinions...the pieces get set in place and there's less of that idealistic fist-pumping march and winning hearts and minds (even though Obama still resonated more with independents again, for this debate...)...but, now, people are going to start making up their minds and there will be little, save another catastrophe on the scale of the recent financial crisis (which, at the end of the day, didn't seem to rattle us at all...mostly it just fed our mistrust of the government...) that will push them from their current choice...

No, now...it's all up the people and that both excites me and frightens me to no end...(set aside the fact that both 2000 and 2004 elections were stolen...) Now its feeling reduced to the young vs. the old, the liberals on the coasts vs. the conservatives in the heartland...

But I'm scared for other reasons...

Especially when we have Palin, self-described lipstick-wearing-pitbull, delivering speeches that actually would incite violence against Obama - by continually referencing his limited, brief interaction through a charity-board, in his past with community organizer (and, yes, former Weatherman) Bill Ayers...essentially, Palin, with her wretching folksy-ness, wants to have her cake of being racist and eat it too, by getting away with it by cloaking it in words like ...he associated with a known domestic terrorist... ...riiight, "he doesn't see America like you and I..." she said...constantly repeating the word "terrorist..." ...catering to the unconscious Id of the radical right and stirring their visceral passions - if you continually repeat the word "terrorist" in (attack-filled-) speeches about Obama...then eventually the red-eyed bulls of the deepest dark spirits of the right will eventually make the connection Terrorist - - Obama...

Immeasurably, indescribably contemptible...and evil-hearted - the GOP ticket is encouraging violence to the point where some are shouting out "terrorist" "treason" and "kill him!" during Palin and McCain's rallies.


Can you fathom this? The McCain campaign is ENCOURAGING...potentially-murderous-hatred toward their oponent...who is black...ENCOURAGING racially-charged violence...by cloaking it with words like "terrorism" and essentially only using Ayers as a scapegoat.

How do you even defend that? 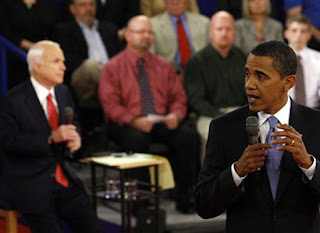 Anyway--back to the Debate from last night.

From Huffington: "[Obama] was centered where McCain was scattered. Forceful where McCain was forced. Presidential where McCain was petulant.
Obama's measured reasonableness totally countered that caricature. You could fault Obama for not being particularly inspiring, but you could not miss the rock steady competence he exuded -- authoritatively delivering substantive answers to questions on the economy, health care, taxes, and foreign policy. "

"[McCain] won't be elected because he has nothing relevant to offer for an economy in meltdown and a nation in fear. "

From Walter Shapiro on Salon.com

With the economy nose-diving, McCain did not achieve the surge he needed, while Obama looked masterly as the candidate of reassurance.

also from Shapiro: "McCain desperately needs to discredit Obama, since he cannot survive an election where the dominant topics are recession, Wall Street and George W. Bush..."

So, you have nothing left, McCain, but to embrace race-baiting and invite violent hatred against your candiate... Obama is your fellow American, John, he is your fellow-human-being...and you are catering to the most primal, malleable anger that would stilt us back to pre-Civil Rights Movement-hatred...

Bob Cesca unpacks McCain's palpable disrespect for Obama, by calling him "That One..." during the debate.

"...referred to Senator Obama as "that one," calling to mind some of the not-so-subtle race baiting that has been the spasmodic, desperate tactic du jour for McCain and his airheaded coward of a running mate..."

Thomas L. Friedman (NYtime) asks, How in the world can conservative commentators write with a straight face that this woman should be vice president of the United States? Do these people understand what serious trouble our country is in right now?

Obama's closing statement...
"I know that I wouldn't be standing here if it weren't for the fact that this country gave me opportunity. Are we going to pass on that same American dream to the next generation? Over the last 8 years we've seen that dream diminish. Wages and incomes have gone down. People have lost their health care or are going bankrupt becuase they get sick. We've got young people who have got the grades and the will and the drive to go to college but they just don't have the money. And we can't expect that if we do the same things that we've been doing over the last 8 years, that somehow we are going to have a different outcome we need fundamental change. But we're going to have to have the courage and sacrifice, the nerve to move in a new direction..."