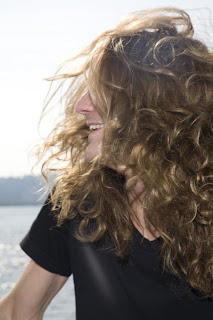 While he's thinking how to properly phrase his response to the uncharacteristically vague questions I've conjured for today, I pause, myself, and reflect on the slight absurdity of my asking Swedish-born musician/composer Gustav Ejstes, (who sings entirely in his native language completely regardless of the artsy psychedelic head-music-loving, all-English-speaking American indie crowds who eat up his music,) about why he decided on more instrumentals for his band, Dungen's, fourth proper release, 4 – like I'd even understand what he's singing anyhow…

The fact is, this Swedish auteur blending jazz, heavy metal, space-rock (and latent hip/hop influences) has managed to capture an appreciative audience regardless if we're all left guessing at the meaning of the lyrics– because, firstly, it has always been about "feeling" and "emotion" for Ejstes in forging his expansive, flit and fuzz rock odysseys; but, secondly, he has garnered this ravenous (in the indie-underbelly) attention by forming a glittering psychedelic rock sound that wholly expresses a mind molded by the nobles of American 60's rock mythology, Jimi Hendrix, The Who, Pink Floyd— refracted through an idiosyncratic writing perspective of an upbringing rich with classical training (piano, violin, flute) and an inevitable exposure to some mind-blowing underground Swedish psyche gems.

"To me," said Ejstes, "It's very obvious what the song is going to be like – I feel that almost immediately. But, lyrics for me, are important to me, but it's hard to make music…it's emotional, and you really dig into yourself to get the tones and the melodies." For Dungen's first three proper records, Stadsvandringar, (the personally monumental) Ta Det Lungt and Tio Bitar, Ejstes wrote and recorded the material on his own and then brought it to the band (Reine Fiske, Mattias Gustavsson, Johan Holmegard) for live presentations.

"If I wrote a song I recorded everything the same day, I put it down on tape and played all the instruments, beginning with the drums," said Ejstes, "That way, you have a lot of material but it's very definite – I almost never worked on a demo. I just picked the first recording always." But for 4, Ejstes brought developing ideas to Fiske develop together. "I wanted to see how the music changed. I wanted to keep it open for myself."

Certain records just burn themselves into the timeline of your own musical consciousness. You find an album and you always return, with reverence, to those first few listens and how it changed you – 2004's gargantuan psyche storm opera, Ta Det Lungt, and it's piston-pumping drums and shimmering guitars and grand crescendos and tight rhythms, is certainly one for me – as it was for many in the west as an awakening moment for Dungen fans hungry for what they were laying down…

With 4, however, Ejstes (who was raised with fiddle training in a small village in south Sweden) stretches into calmer compositions. There's room to breath, space for the violins and pianos to lead the way; this album certainly has it's gritty guitar grimace jams where Fiske sets a fire, but it's more atmospheric as a whole: "I still love the heavy music, I still think we have that element." And mood? "For me, the main purpose of songwriting is to make music that really has taste, it should taste and it should be a lot of emotion in the harmony and the melody; the material should be emotional. I'm glad that you can hear something, something emotional in the music."