Zombie Dance Party 5: The Return of the Zombinator 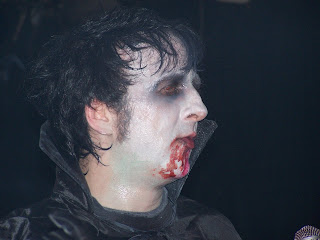 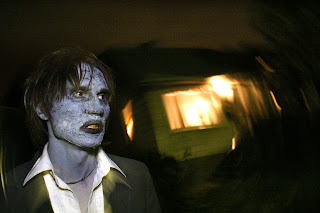 Halloween's always a party; a fantastic, supernatural party, with howling and fangs and blood and an all-out endorsement of indulging in dorky theatrics and over-the-top cackling; the thrill, the fun of giving and receiving a good scare. Euphoric escapism through the donning of a cape or a gown - a spooky party ingrained in all our collective consciousness with Lon Chaney doing karaokee and Boris Karloff grimacing as he serves punch and Bela Lugosi coaxing all the girls into candle-lit slow-dances. It's Christmas for the creeps.

And Carey Gustafson, Detroit's own DIY-producer/event-planner/musician/glassware artist and overall-enthusiasm-spreader, knows this all too well. For five years now, she's been hosting Zombie Dance Parties, formal soirees that encourage-(to-the-point-of-almost-mandatory) creepy costumes, freaky theatrics and unabashed spooky exhibitionism, presented in some strange undead rock-n-roll gala, where even the performers are likely covered in blood.
"It's one of the handful of times of the year that you're allowed to just go nuts-o," said Gustafson, who hosted the first party in her then-newly-moved-into house in Ferndale, in 2004 (where 100 energized zombies showed up, with a live basement jam session with the Atomic Numbers and the Hard Lessons). The next morning she thought, "maybe next year this could be a show…and…" surveying the zombie damage, "…not at my house."
"I'm a huge fan of the total kitsch factor, of being a grown-up 'normal person' that's just trying to get through day-to-day and all of a sudden you can turn into this hideous creature, or sexy monster or just be totally incognito." Year 2 was a success, with live music from W-Vibe, the Pizazz and Johnny Headband. Year 3 accelerated with an invented "undead" 60's pop band, the Zambies. Year 4 doubled as a release party for an all-local-double-Halloween-album from Bellyache Records. Year 5 will highlight Year 4's experiment, which was "The Zombinator…" a team of make-up artists offering their artistry to rot your features, scar your skin and drain your blood – and allow you to join your Zombie brethren on the dance floor of the Magic Stick. 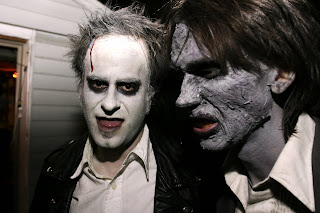 With the Zombinator, arriving attendants "who didn't wear a costume, which was the minority, could get something done on the spot" or those in costume could "get enhanced," said Gustafson. "I want everyone to feel welcome, comfortable and have a great time whether they've been every year, or a newcomer that's just come to town and wants to be a monster…" The undead lineup of bands includes the dark-groove space-punk of aptly
titled F'ke Blood, the debut of recording project Hidden Ghost Balloon Ship…and a mystery Sonics tribute band: Sonic Boom.At the witching hour, Gustafson will present the horrid hoard (dig all these cheesy Halloween-alliterations?)…with a midnight snack of finger-foods before the culminating dance party heats up.

Gustafson acknowledged the vital support of the Majestic Theatre owners, and added, "People come and go, friends move away, friends move back, but the common thread has been, just, good buddies that are willing to help. I couldn't do this by myself, so all the pals that have contributed and supported it every year, and brought their friends, strangers-to-new friends that have come out of this, you can't beat that!" Doors at 9 pm, with Defying Death Bicycle Club DJ's facilitating the dance. Monsters encouraged! Feel the embrace! Dance around!