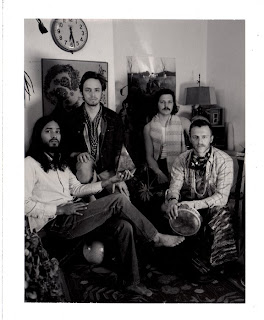 So...this song comes to me at just the right time…way back in late January, all of 2008 still ahead…while the sea of candidates were bitching at each other at primaries, the “surge” was being debated and lengthening endless war, timelines for withdraw were getting vetoed, more jobs were leaving Michigan and on and on….death and depression and down-trodden suburban-lulls of complacency…

Sheltered in a café from the gray-blur-bluster outside, I attempted reviewing the late-07 release from Brooklyn tribal-psyche-n-folk-n-pop sage sounders, Yeasayer - All Hour Cymbal – and then the single, “2080” hit me…

It hit my world-weary anxiety, it hit my generational conflicts of destiny, and then the chorus rushed from beneath, clipped my shoulders, lifted and thrust me forward out into the fresh, malleable snow outside, in high trilling falsetto, “It’s a new year – and I’m glad to be here…It’s a fresh spring, so let’s sing…” delivered with an Eastern-flavored intrigue, stirring West African rhythm and murky dub grooves in such a rousing high-toned swarm of duel-harmony-warmth and timeless spiritualism swelling over the driving wave of the bass and the cascading rainfall of gleaming guitars. I felt renewed, I felt like no matter what happened – I will still be here…and it’ll be counterproductive to just keep bitching or feeling sorry, for myself or anything… Anyway, I felt like going on...

Speaking with guitarist/singer Anand Wilder, he said, “There’s a sense of seizing the day, make the best of the situation that you’re in. For me, I think these times are fucked up, there’s a lot you can comment on, but I don’t want to be Rage Against The Machine, I think that is kind of played out and a bit cliché. A lot of the album was reflective of Baliwood soundtrack music; where you’re living in all this squalor but - you don’t want to see a Satyajit Ray movie about the squalor - you want to see a bombastic Baliwood musical that’s an escape from that kind of thing. I think we were going for that escapism, while also being able to touch on the reality of the situation, to be critical of it…”

“Maybe people like us ‘cuz they think we’re a super-political band,” he muses, “and they’ll be depressed when the next album is like, abstract love songs…”

The band (with Chris Keating, Ira Wolf Tuton and Luke Fasano) is eager for their first headlining tour, which promises considerable new material, but still to be thick with All Hour Cymbals side-winding location-less enchantment and inverted pop flavors.

The two of us riff back and forth, cathartically airing our woes for the enraging lies and ploys of the right and share our hopes for the charging vibrancy of the youthful, generational-torch-passing of the left. We start a strange bonding through empathetic yells. When he speaks of friends noting Obama’s naivety, “Whatever!” shouts Wilder of his response to them, “he’s idealistic! Finally, I can say [of a candidate] ‘I can relate to this guy, and he’s not an old school guy.’ I think it’s great that he’s naïve, he’s not jaded into being a puppet of the lobbyists.”

And that continues until we calm down to talk music…finally, Wilder, with sighed surmising, “I dunno…we’re not a political band though…”