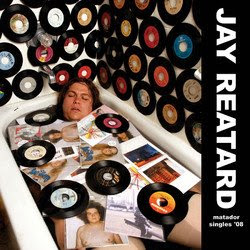 It's a beautiful sunny day in mid-October and the glowing box upon which I type these jittery words is secluded down in a basement with very little natural light seeping in – so I'd like to crank this review out fairly expediently so I can get out and enjoy it…which would be appropriate considering my subject, Jay Reatard, industrious punk-ish rock and 60's garage pop harvester from Memphis, is known for his prolific pace of churning out songs. Having recently signed to Matador, a home for many stately acts of the indie-pantheon, Reatard (born Jay Lindsey) presents us with the Matador Singles –a statement of Reatard sort of spilling out his driving, shaking, up-and-grab-you shred-pop and saying, hey, welcome to my new house (Matador), I just hung my shit up in the closet and pulled in the garage, let's have a house warming party – but, simultaneously, it clears out all of the songs he's been working on through 07 and 08 since his latest LP Blood Visions, and clears the path for a new full length next year. (He also dumped singles from his In The Red days as well, this year).

What the Matador singles provide are a sequential presentation of Reatard's three primary modes, the first third features the power pop with a hint of punk-rock (see the run-n-gun "Painted Shut"); the second third shows the punk rock dominating the power-pop (machine-gun drums and nasally shouts over hand claps of "Hiding Hole")…or, on the last third of the album, a more somber singer/songwriter spilled out with the poignancy of fourtrack fuzz (see the rough-hewn doe-eyed goosebumps of acoustic ballad "No Time.") Opener, "See/Saw" highlights guitars that explode and careen and blur and buzz acerbically over ever tumbling drums that just drive and drive – while on "Screaming Hand," the rhythm goes into a more pounding up-down, left-right juke in a punky pogo recalling style with a chorus refrain that waves out viscerally over a screaming guitar.

Optimally positioned in the middle is the hypnotic cover of Deerhunter's "Fluorescent Grey," where Reatard does a fine job of making the song his own…shifting from his usual Gary Numan—Tubeway-Army—recalling style and more into a Mark E. Smith creepy shaman rant. A particularly favorite jam is the shoegaze-recalling 90's pop of "Trapped Here." Then the final 3 tracks wind things down for a more subtle and sly-pop style that lets the acoustics guitar lead the way over siren synths that meander around in pretty little melodies. "I'm Watching You" feels like a Reatard-flavored butane-lighter lit encore that, like Trapped Here before it, again brings out the shoegaze flavored guitar storms.

For a guy whose been playing and recording for almost 10 years now, with so much material out there and so many different areas of where you could start…I dare to conjure the cliché of saying – this (release) may be the ideal time and place to dive into the Reatard universe…then slowly work your way around.

see him live, at the Magic Stick, Wednesday night with
Terrible Twos
and
Cola Freaks 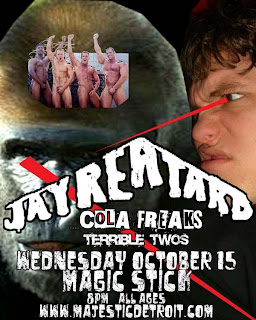