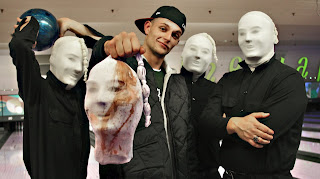 (This week's Real Detroit Weekly features filmmaker Colin Duerr and his 4-part series of sci-fi/suspense/horror films featuring The Amino Acids...retraction: presented here is the corrected version, as my article in Real Detroit does not properly credit prop-designer Wally Wojciechowski for his work in building a vital prop for the film.)

That said, parts 2 and 3 of the series (both running at or around 30 minutes respectively), debuts on the 23rd at the Main in Royal Oak. You can see part 1 here.


It's nearing closing time at Continental Lanes and filmmaker Colin Duerr is wheeling out the Death Machine. We're on-the-set for the 22-year-old Royal Oak native's latest project, The Amino Show, a series of "philoso-terror" explorative episodes of suspense and horror, starring the mysterious bizarro-surf-punk quartet, The Amino Acids – documenting the unpredictable guitar-n-drum-toting aliens blood-soaked bombardment on the human race during the last nights of existence.


"There's so much you could do with the Amino Acids," said Duerr, acknowledging the temptation to embrace campy-ness given the nostalgic ring of their rock style, but "I wanted to give it more meaning, to give it a soul and intelligence; something that really questions the meaning of our existence – I feel that's what [the film] boils down to…"


The Death Machine, built in a driveway from an old pool-pump by prop-designer Wally Wojciechowski, is to be used for zombification later in the evening—leading to a shotgun-showdown that results in the spillage of gallons of blood…and hot girls forced to bowl a game against the flawless Aminos to save their own lives. "…and in the process," said Duerr, "somebody loses a head."


"I'm just trying to prove myself," said Duerr, who already had his mind made up to be a filmmaker before he'd even gotten to junior high – even directing his own home movies as a kid. "When I go to shoot, I forget everything," he says, responding to the influences question—but later notes Paul Thomas Anderson, Stanley Kubrick and David Lynch's unique flavors of psyche-devastation. He regards "style" the same way he regards life and his own questions of the meaning of existence, surmising, "I'm finding that out right now - this is me finding out what kind of filmmaker I am…"

The style, based from Part One ("Slack Removal Machine") which saw the Aminos attacking-and-zombifying a kid's birthday party ala terror-clowns, honors his influences in that flavor of tripped-out paralyzing eeriness, it disturbs with perplexity and feels cerebral while also spilling gallons of blood and upsetting your consciousness with downright chilling imagery and skewed angles framing the absurdity of humankind through the dull ether eyes of these expressionless inter-dimenional travelers (the Aminos), out to kick up a bit o fun with these strange meaty bipeds (us) before what could very well be the end of the Earth, the end of existence. And with that, you have the basis for 2: "Focusing Disintegrator Ray" and 3: "Good 4-U", debuting at the Main Art Theatre October 23rd (with a 60+ minute run time, described similar to two-Twilight Zone episodes) and promised to include retro '50's drive-in theatrics of live interaction with audience members!

The Dondero High grad attended the Motion Picture Institute but decided left, feeling more comfortable as his own teacher. He has since directed/released the concert film: Punks Vs. Cancer, documenting a charity show for cancer research with the Jollys, Troubleman, Toxic Shock Syndrome and his current stars The Aminos. Duerr is currently filming a documentary on the renowned debauchery-festival the Dirty Show.

Duerr said he owes much to his close friends who have dedicated themselves in numerous ways, via camera cranes, prop building or becoming cast members. Asked to hint at expectations for part four, Duerr says, "…millions of explosions all over the world."