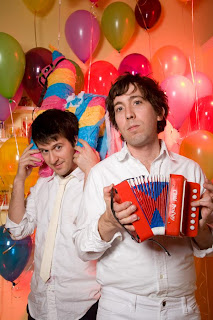 Brooklyn based indie-pop collective Bishop Allen (which centers around a pair of Harvard grad songwriters: Justin Rice and Christian Rudder) seem to be in that spot where they can make a very reflective, grown-up record; they put out their endearing debut in 2003, then steadily got the mini-spot-lights of various blogs to coalesce upon them when they ambitiously aimed to release an EP every month (for the first half of 2006) which came to fruition in form of their 2007 full length The Broken String. Thus they had their arrival record, their attention-grabbing spat of recordings and their oh-well-now-that-we-have-your-attention-check-this-out record, respectively. Now on this seasons' Grrr, the band assures all its steadily garnered fans that if they've worn from all the miles of road traveled or if they've wisened from all the songs wrung from their literate minds, that above all, they just no how to write a good pop song. 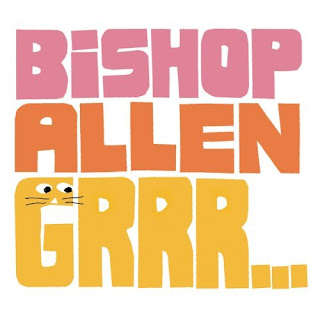 "The Ancient Commonsense of Things"


To use lightness-conjuring words like laid-back or freewheeling for the often celebratory-vibe of these sunny sonnets underscores that much of what the pair (joined here by Darbie Nowatka and Michael Tapper) does...is done with so little, or, never over-done - minimalist pop: a bass, an unassuming acoustic strum, the periodic warming coo of violins and a nice stepping back beat - where much of the effect is in the human element, the pleasing mid-range tone of the vocals (the la da daah's that synch up with the strings on "Dimmer" or the soaring back and forth over both marching drums and subtle computerized beats on "South China Moon.")
The tightly wound drums and woozy humming guitars of "The Ancient Commonsense of Things" is quite the reflective track indeed - (going through the history of ingenuity) - but it isn't that it's a reflective album - it's a stress free record that captures the duo at a point of realizing what it is that they share as songwriters that makes these easy-sliding hooks and grinning sunny swirls so special. Much of what is layed upon the landscape is there to massage a mood - a measured sensibility for pop construction, not far from a Paul Simon at his peak or a Stephin Merritt at 69-love-songs minus all the synths. That's not to say there aren't moments of invigoration, often coming together in the rising visceral releases of those harmonized ooh whoas and la da daas of various choruses and refrains.
more info at their site
11 / 1 - Crofoot Ballroom in Pontiac, MI
(photo: Sebastian Mlynarski)
Posted by jeff milo at 11:49 AM