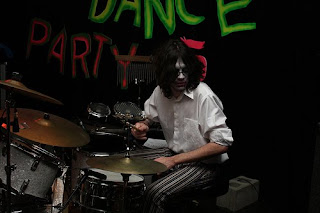 At last year’s Zombie Dance Party – a sextet of black-clad zombies, the lead singer in a top hat, the drummer stomping in candy-striped pants, took the stage, announcing themselves as Sonic Boom – and performed a set covering renowned-grimey-garage rockers The Sonics.

TJ Grech, whose shaggy top and rail frame can be seen at the front row of almost every great Detroit rock event, now and for the past five years, was the one who gathered this project together, which included John Szymanski (from the Hencthmen), Frank Woodman (of Woodman), Eugene Strobe (recently of the Witches, among many), Ray Thompson (of Oscillating Fan Club) and Alex Glendening (of The Decks).

“Everything to do with our band after I made the decision to do a Sonics cover band, was just ridiculous.”

ZDP-founder/promoter Carey Gustafson loved his idea so much that she committed the band before they’d actually solidified a line-up. “I chose the Sonics because they always seemed like the ideal rock and roll party band. This was a bunch of dudes who were ready and willing to get the fuck down and they were taking you with them.”

The goal was to get recreate the Sonics inherent ability to inspire a bit of crazy dancing, or, ass-shaking, if you will, this being a dance-party. “I don’t even have an ass, and I certainly don’t know how to shake it, but when the Sonics are on, I can’t resist. I’m not gonna say I haven’t been half-naked in my bedroom having a one-man dance-party to “Have Love, Will Travel.” And “Psycho?” Fuck me, if you’re not rocking out to that then you hate music. I just wanted to get people to fuck all inhibitions and dance their drunken asses off.”

This year – at ZDP 6, which features the Electric Fire Babies and 800-Beloved, Sonic Boom has been reborn, properly as The Garbagemen – and will now interpret songs from the similarly-creepy/grimey/bluesy –situated 70’s spooky-crooner-punks, The Cramps.

Back around 00-01, Grech was finishing up high school, listening to all that late 90’s pop punk stuff, sporting spikey blue hair and day-jobbing at Wendy’s, when he heard the White Stripes De Stilj and… “hearing that, I finally understood music.” From there, Grech fell down the rabbit hole of Detroit music – to The Paybacks, The Go, The Dirtboms and The Hencthmen (having now joined a covers band with a member of the latter). “From there,” he says, looking back several years, “it all unraveled. I started digging back in time through music and I’ve been lost in the 60’s ever since.”

Eventually the Detroit garage boom faded and the hipsters scattered a bit. “I stuck around and I love it and I love the people involved. I was too committed to the music. It’s had a dramatic effect on my life and most sincerely for the better.”

Grech’s band resume would mostly cover his high school marching band, the artwork he’s contributed to record covers and posters and his touring with the Hard Lessons, effectively as a roadie. He has songs written, continues to write and dreams of the day of starting that original band (set aside his buds in the Garbagemen) – he just hasn’t found the right people or right chemistry yet. 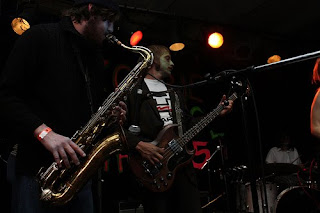 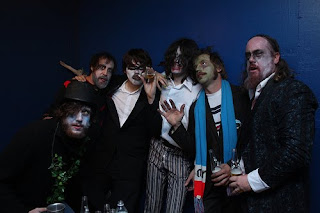 Grech reveled that, “ZDP takes two things I love, Halloween and rock and roll, and just crams them together in one big drunken celebration.”

It becomes clear, not just for his Sonics reverence, but also for his solidarity with ZDP, that he reveres rock’s ability to cause a fit of healthy insanity – and thus, the dance party erupts. “How people go to shows nowadays and stand in front of a band without reacting to what’s being pumped out of the speakers is beyond me. Is everyone aware that bands feed of their audience? I may not be the biggest dancer, but I do tend to rock out.”

Grech worked with Thompson at the W.A.B., who happened to be a helluva sax player. Woodman, a close friend to Grech, was “the perfect mad man for” pulling off Gerry Roslie’s vocals. Having seen The Decks many times, Grech knew Glendening was “just a fantastic guitarist and all around good dude.”

Szymanski was Grech’s dream pick for bass; “I presumed the possibility of him slumming it with us was so impossible that I wasn’t even gonna bother asking him. Frank wasn’t so timid apparently, because one night I get a drunk message on my phone from (Woodman) slurring something about how John “is in!” I just hoped John was more sober than Frank to assure that his commitment was genuine.” Somewhere along the lines, said Grech, Strobe “fell in” on keys and, he surmised, “I couldn’t have asked for a better band for what would be my first show.”

The practices were “always cobbled together” and proved to be a scheduling nightmare. Initially the guys got together just to see if it was possible. When they realized Gustafson had essentially booked them, there was “that ‘oh shit’ moment. I’ve never been in a band before. Never played a show. I have no idea what I’m doing. Somehow I’m the leader of this outfit. I’m not even confident in my abilities to perform these drum parts, yet I’m half the rhythm with John-fucking-Hentch!...I had my concerns.”

Szymanski, at that point, hadn’t touched a bass since leaving The Paybacks, Glendening had Wayne State classes, Ray needed a new sax – in the two months leading up to the Halloween set they hadn’t practiced as a full band yet. “On the way to the show, I'm driving Ray in my Pontiac Sunfire down 75 and he's crammed my passenger seat with his big ass tenor sax playing along to the Sonics CD trying to learn the solos. This is on the way to the show!"

So everyone rolls up. Thompson meets Szymanski, his apparent band-mate, for the first time – Strobe gets an ipod and headphones and starts listening to the songs they plan to perform, to prepare his keyboard contribution. “So the first time we got to play with everyone in the band was the sound check.”

Have Love, Will Travel~

So the show starts. They take the stage; faces grey with zombie make up, probably a bit nervous. “Something happened…” Grech says, “I think we all recognized the situation and just said, ‘fuck it!’” That fun and reckless abandon came through in the music. Frank was the mad man I needed him to be; Ray was brilliant; Eugene was a champ; Alex and John were the pro’s that held it all together. And I,” he chuckles, “was just thankful my drums weren’t well-mic’d.”

Szymanski remarked afterward that it was the most fun he’d had playing a show in a long time – going on to compliment Thompson’s performance on sax and Woodman’s presence. Then he turned to Grech, the guy who had only just had his first show… “Oh, you were good too.”

So now, this year – it’s The Cramps, a decision the group came to even back when they were still “practicing” their Sonics set. Grech pondered an obvious choice, The Mummies – for their combination of dancey-garage rock and inherent Halloween-ey theme, that and it would be bait for Szymanski to return, that being one of his favorites. But the Cramps wound up being “too perfect.”

So far, “we have yet to practice with everyone…again. I think Alex has committed to dressing as (Cramps lead guitarist) Poison Ivy. And Frank as (singer) Lux (Interior) is going to be a sight that cannot be missed. I think John will be in heels.”

Grech concludes, “Last year my goal was to get people dancing. This year, Frank is committed to getting everyone laid. A worthwhile goal and I think we have a shot. If you love The Cramps, you’re gonna love this. If you don’t love the Cramps, you’re gonna end up loving The Cramps. If you don’t know the Cramps, then…go fuck yourself. But…right now, I really feel that this is going to be something special that I can’t wait to share with people.”

(artwork: Emily Gustafson)
Posted by jeff milo at 11:38 AM