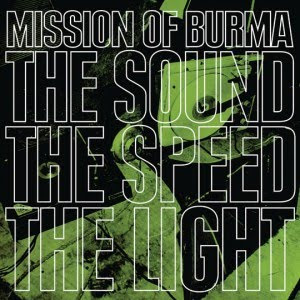 Mission of Burma – The Sound The Speed The Light – Matador

America’s premier post-punk band from the early 80’s releases its third album since reforming in 2002. The quartet, known for their noisy, fuzzy, angular guitars, their rickety rhythms, cloudy vocals and standoffish atmospherics, broke up in the mid 80’s only to see their legend and influence grow exponentially, looming like an effective (and rightfully revered) specter over the progress of 90’s alternative rock. Centerpiece “Forget Yourself” stretches out over quiet caustic guitars as drums and bass sporadically rush in and out in an urgent build, before things settle into a groove and singer Roger Miller sings in his smoky sing-speak, “Be immersed…burn yourself up.” The hook of the chorus, the way the ghostly harmonies sweep in, actually gives it a catchy quality – but the beauty of the composition isn’t realized until it utterly disintegrates in a whirl of wailing, bending guitars that blurt and fizzle their way into another quiet-to-loud builder where the downbeat is so elusive and the structure feels like it could collapse at any minute (“Blunder”), a fist-pumping rager that rides gloriously guttural guitars.
They haven’t lost their taste for that hard leaning drive, that shrieking atonality-that-coaxes-out-a-beautiful-melody, nor have they lost their dark sense of humor, with the running and rampant ballad “1, 2, 3, Partyy!”
~ 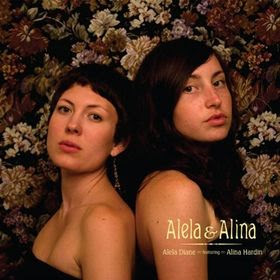 
I’m just about to muse that Alela Diane’s crisp, sonorous, acoustic folk (particularly when joined with Alina Harden) seems so thickly brushed with the mud of pond banks, like some Thoreau-ian deep woods set poetry from songstresses done singing to or about men or their feelings and instead are turning to their homes and to nature – when a quintessential lyric, (from their cover of Townes Van Zandt) swelled by the sturdy intertwining high hazy chirped hum of their vocals, comes wafting over the waltzing acoustic guitars: “Welcome the stars with wine and guitars, full of fire and forgetful…”
And instantly it’s late autumn and we’re beside them, cross-legged in the dirt, beside a bonfire at dusk, their voices and strums, free of drums, drowning out all else. Diane is 25, recently signed to Rough Trade, recently toured with Blitzen Trapper, recently released a full length (To Be Still) and is a straight-up dynamo in capturing the gothic stir and mysticism of traditional American folk. Just as Still captured the restlessness and chill of winter, so does this companion EP, (teamed with Cali-based singer/songwriter Hardin) effectively capture autumn’s bipolar back and forth of rich inspiration with reeling melancholy. Beautiful voices, nicely set atmospheres, no drums, just strums.
~ 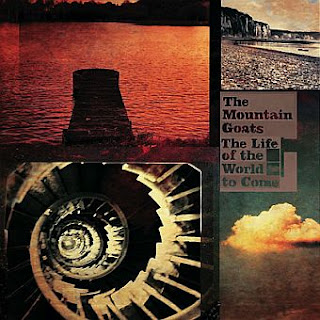 Mountain Goats – The Life of the World to Come – 4AD

In times of personal tragedy, a human being will often turn to one of three things: the first may inevitably be alcohol; but the second and third are frequently music or religion. For singer/songwriter John Darnielle, notorious for his wistful piano-led ballads of thickly poetic lyrics and aerodynamic dressings, has combined the two – through his main outputting project, Mountain Goats, he has reflected all the bible diving he’s done over the last two years with song titles named for biblical verses (“Genesis 3:23”). That he is now plucking the emotional strings of both heartbroken folk/pop and soul-searching via skimming the testaments, only adds to Darnielle’s already staggering delivery of literary spells and painfully relatable quips. He was already dabbling in the religious vibe on 2007’s Heretic Pride, where he sung of the reckoning and apocalyptic imagery.

The distinction for World To Come would be less of a driving beat and the opting for more piano over those jangly guitars. It’s more somber to be sure, definitely an autumn record. But the endearment, the tear-jerking beauty, remains.