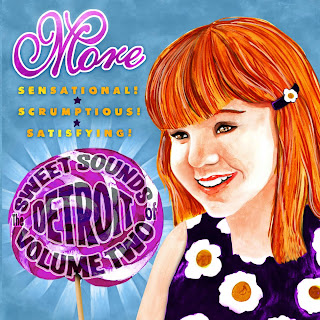 As fun and dizzying as the sugar highs that each of its songs glorifies – Bellyache Records serves eighteen sweet-themed entries, all from local bands, for this second volume in the Sweet Sounds series, a sequel to the local label’s 2006 collection. Scene veterans like The Pop Project, The Meltdowns, The Sights and Fortune & Maltese mix in with the newer school, like Silverghost, Carjack, Woodman, Dial Tones and Electric Fire Babies. With a nostalgic delivery wringing with reverence for the basement twist-party album, many entries embrace that garagey-rockabilly swing of surfy, retro groove, while unabashedly incanting those ceremoniously after-school spaz out style classic rock poetics, like turning away from beer for the camaraderie of three musketeers (the buoyant keyboard buzz and bah-bahs of “Candy Song Redux”) or riding bikes through candy shops and knocking the arcade game in the back corner (the mischievous and reeling, glamorous grind of “Black Licorice”), or preaching against hasty absolute views on edibility (the psychedelic and jangly “5-Second Rule”). Beyond the retro-rock, you’ll get wistful folk/pop (“Buy Your Love”), techno/house revival swirled into space-rock (“Sugar Cube Castle”), and austere new-wave (“Life in Lemonade World”). Playfulness abounds, not only does the Sights entry seems to mirror the opening riff of Neil Young’s “Cinnamon Girl.” Rewards include the stylish banjo-inflected ballad from Swamp Sisters, Woodman’s charming intro, Silverghosts atmospherics, the staggering storybook ballad from Paper White and the formidable dance jam from EFB.

info at: Bellyache Myspace
or the online shoppe