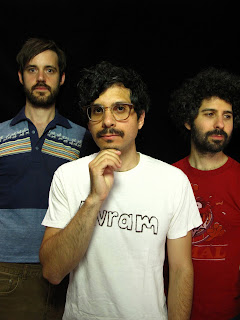 All My Words: DC Interview - Yoni Wolf of Why?

Yoni Wolf’s distinctive bleated whirr flares up in exclamation when he picks up the phone. I then ask if he has caller ID, and then before he can answer I try getting conversational and say it’s funny that’d he’d choose that wording, cuz Eric Allen and I were just talking about the KISS comeback at Cobo Hall.

“No…no…I just knew you were calling,” he says, backtracking. “You know, I don’t know much about KISS, I’ll just say…I know the hits, but…”

I say, “Yeah, we were just covering the pros and cons of ‘Shout It.’ But, what are you digging on this year, besides not-KISS?”

“I’ve been watching ‘30 Rock’ on the Internet,” says the singer/songwriter and longtime home-based recorder, “pretty funny. And, definitely ‘It’s Always Sunny in Philadelphia’.”

“Yeah,” he says, the tiredness starting to ring out, “what else? I’m working on this record for my brother, mixing it.” His brother, Josiah, joined the Berkley-based Why? in 2005, rounded out by guitarists Austin Brown and Doug McDiarmid. But it’s been a long road for the band, starting as a solo moniker as Wolf’s hip/hop project in the early 00’s before leaving commitments to other projects, namely the fateful collaboration with fellow Cincinnati-based avant-rapper Adam Drucker (who first formed Greenthink, before they headed to San Francisco and subsequently formed Anticon, and label flagship Clouddead.

Why? established themselves as a still-hip/hop-leaning band with 05’s Elephant Eyelash and effectively turned heads and ears with 08’s Alopecia, solidifying the band’s reputation for blending indie-rock, new wave and folk with gritty hip/hop and staggering, evocative lyrics of gut-wrenching spill-outs of emotion and gritty imagery.

Wolf, raised by a Rabbi, has been experimenting with music ever since he stumbled upon a four track in the depths of a synagogue. This includes recording and mixing, like Josiah’s current project.

I have no idea why I’m trying to push some casual KISS trip. Probably because I want to avoid questions about his lyrics, overdone territory for this poetic rhymer.

“As far as I’m concerned, the lyrics are the song, what the song is based around, at least in our music. That’s what my ear will be drawn towards because we are a speaking species.”

But what if people misinterpret your vivid layouts of dressing like Jesus, or sodomy in basketball courts or a busload of high school soccer girls?

“Oh, that’s okay. That happens when even when you talk to people, everyone has a different definition of every word, based on their experiences. If it’s totally different than what you meant than, maybe you haven’t done your job well.”

Next month, the band properly releases their third full length, the piano-heavy, guitar-bass-n-drum affair Eskimo Snow; seemingly a departure from the indie/hip-hop they’d become known for, but disarming when one learns that the 09 release was written at the same time as 08’s Alopecia.

“I don’t think people should see it as ‘Oh they’re going this route now…’” he says, stressing that each album’s distinct vibes (dark dreamy hip/hop vs austere keyboard fuzzed folk balladry) came at the same time. “What I’ve been writing this past year is perhaps more in a…hip/hop, I dunno-I hate these fucking words, but, yeah, more rhythmic singing, more than even Alopecia. I dunno, you do what you do. Eskimo Snow feels like a good record to come out after Alopecia. It makes sense.”